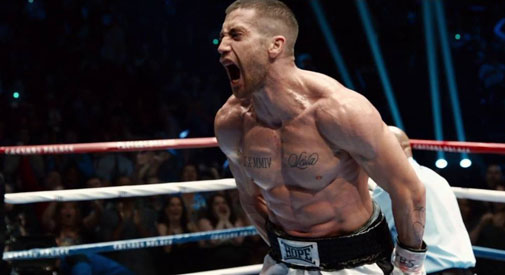 Lots of expectation here by pairing peaking star Jake Gyllenhaal, who’s compiled an eclectically impressive resume over the past decade or so (“Zodiac” and “Brokeback Mountain,” and let’s not forget the uber-creepy “Nightcrawler” oozing out from under a stone last year) with director Antoine Fuqua, who’s been all over the road (“Shooter,” “King Arthur” and “The Equalizer”) since making his mark with “Training Day” back in 2001. Fuqua has the gift of folding urban hip in seamlessly with the mainstream. His works possess auteur flourishes while notching much off the blockbuster checklist. In short, he’s an anomaly and a blessing during these dog days of summer. 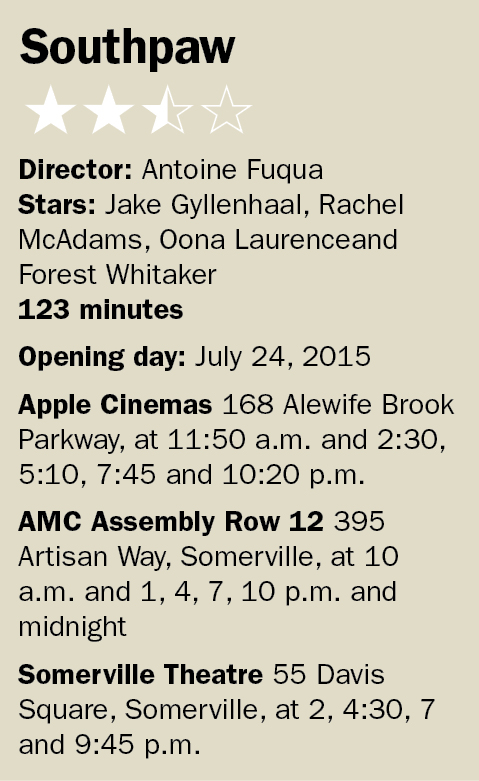 And while that old dog might not want to learn a new trick, he might like to witness one, which is why “Southpaw” nearly disappoints – it’s about as clichéd a retread as you can ask for. The plot feels like something right out of a middle “Rocky,” with the champ on top before he loses it all in a single stroke and has to go toe-to-toe old-school in a dingy gym to get back to his regal perch. But because of the sharp partnering, “S’paw” dances around a lot more nimbly and entertainingly than its pat regime would otherwise indicate. It opens with a bouquet of roses for Billy Hope (Gyllenhaal) and his wife Maureen (Rachel McAdams). They grew up in Hell’s Kitchen, met at a home for wayward kids and now he’s the light heavyweight champion of the world and they live in a spacious New York manse. Not to give too much away, but there’s a serious tumble that happens early on, and the people who were around Billy and getting paid large scatter, pretty much leaving him for dead in the aftermath. It’s the perfect spot for the venerable Forest Whitaker waltz-in as the reluctant Titus “Tick” Wills, a boxing gym owner and former pro trainer who now works only with troubled youth. To get an “in” with Tick, Billy’s gotta get back to the basics – no, not bobbing and weaving or defense (he never had much, and his face looks like a tomato at the end of most of his battles), but cleaning the toilets and getting clean and sober. That’s the launching point for a shot at the guy who took his belt and fairy-tale life (Miguel Gomez, trying hard to channel Mr. T’s menace).

In an ironic turn, rapper 50 Cent winds up in the mix as a fight promoter who tries to ink Billy to a three-fight deal so he can pay his bills and prevent his palatial estate from being foreclosed (if you missed it, Mr. Curtis Jackson has hit a similar fiscal skid and may have his Hartford area mansion wrested).

The fight sequences, well choreographed and shot by Fuqua and cinematographer Mauro Fiore, who worked with Fuqua on “Training Day,” pay off nicely and Gyllenhaal, who clearly relished getting into tip-top shape (he’s ripped and shirtless throughout) for the project, gives it his thespian all, even as the plot gets tied up in the ropes of the old, the tired and the predictable. No left hook comes in to rattle the sway, though Fuqua tries to tap into the infectious meanness that so imbued “Training Day” – but it becomes more a gumless shadowboxing exercise than anything soul-plumbing. “Warrior” (2011), an equally clichéd ring-centered odyssey with an equally talented cast (Tom Hardy and Nick Nolte) about estranged brothers squaring off in a mixed martial arts contest, offered more changeups to keep the audience back on their heels and thinking. “S’paw” does boast poignantly pointed new music by Eminem, but music to float by doesn’t mean you’ll sting like a bee.