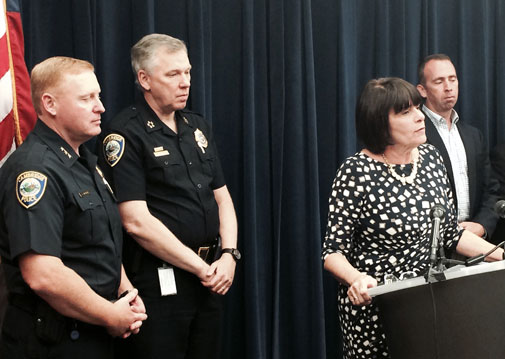 A suspect in mid-September’s fatal stabbing was arraigned Friday, with many details still to come in the crime, officials said at a press conference later in the day at police headquarters. They weren’t able to explain what led to the stabbing or whether there was a history between the suspect and victim, Tywann Jones, 35, of Roxbury.

Nor did they know the whereabouts of the knife that killed him, Middlesex District Attorney Marian Ryan said.

What was notable to law enforcement officials was the fact Antwan Gonsalves, 33, of Cambridge, was arrested and arraigned “in part as a result of the public’s cooperation with law enforcement,” Ryan said.

Two in a short time

It followed closely the arrest of Roosselin Altidor, 26, of Medford, a suspect in a fatal Aug. 12 shooting. Altidor was arrested Aug. 21 and arraigned Aug. 24.

“What we have had are a couple of incidents that occurred in a fairly short period of time. What’s notable is the willingness of the community to come forward, which led to fairly swift resolutions,” Ryan said.

That’s no accident, officials said. Members of the public are coming forward more often, and police speculated it was in reaction to older, unsolved deaths and officers’ commitment to a community policing model.

In addition to witnesses and information from the community, there was video surveillance around the Central Square 7-Eleven where Jones was stabbed shortly before 1:40 a.m. Sept. 12. It showed that Jones went from the sidewalk at 750 Massachusetts Ave., where he was talking with a friend, to a car holding three people – including Gonsalves, Ryan said. There was a brief conversation at Gonsalves’ driver window and Gonsalves asked Jones to leave, which Jones did without hesitation. Yet when he and his friend were back on sidewalk, Gonsalves leapt from the car, along with the person in the back seat, and “engaged [Jones] in a violent physical altercation.”

Jones escaped and made it a short distance away, but turned and went back, pursued by Gonsalves, leading to “a very close encounter between those two,” Ryan said. Gonsalves’ acquaintance was trying to pull the two apart, and at some point Gonsalves went to the car, only to return immediately. Seconds later, Jones was down on sidewalk, and Gonsalves and the other man other went back to the car and drove away.

“Mr. Jones was able to make his way back into the 7-Eleven, where he collapsed on the floor,” Ryan said. He was taken to Massachusetts General Hospital with life-threatening injuries. Surgery couldn’t save him, and he died at around 4:40 a.m.

It was unclear at what point Jones had been stabbed. With Gonsalves in custody, there are no arrests pending, Ryan said.

Gonsalves’ bail was set at $7.5 million with a $750,000 cash surety by Judge Michele Hogan in Cambridge District Court, making it likely he’ll be held until his next hearing Nov. 4.

The fast resolutions to the fatal attacks stand in contrast to the unsolved killings of Charlene Holmes, 16, who was shot June 3, 2012, near her home on Willow Street in the Wellington-Harrington neighborhood, and Kensley David, 22, after being shot in the head Thursday at Windsor and Washington streets, around the time of last year’s Fourth of July fireworks.

A lack of information leading to arrests in those crimes led to closer ties between police and businesses and residents in higher-crime communities, Cambridge Police Deputy Superintendent Jack Albert said Friday. The police department’s goal is that residents “know us long before something happens – so we’re not introducing ourselves for the first time [when a crime is committed] and they have confidence they can talk to us,” including anonymously.

“There is an effort and a strong emphasis on building relationships,” agreed Jeremy Warnick, director of communications and media relations for Cambridge police. “We have our officers and command staff in so many different communities and groups, particularly within areas that have seen more crime, such as Area IV.”

Albert said the community’s interest in coming forward may be a direct result of the unsolved crimes: “I think it’s a big piece too where the community is very upset that people didn’t come forward on Charlene Holmes, and they don’t want to see that happen.”

“It’s a very tight community, and a lot of families have been in that neighborhood for a long time and they all know one another. It’s a shock to them, as it is for us, when we can’t solve this,” Albert said of the Holmes killing. “It’s disturbing for that to occur, and that at this stage we don’t have the information we need to solve the crime. We would love to have that phone ring five minutes from now and have somebody say, ‘You know what, I can’t live with myself any longer. I gotta give you this information.’ Thankfully [recently] people have stepped up and they’ve been extremely cooperative.”