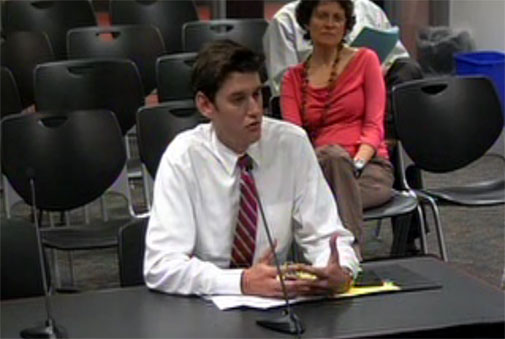 Edward Byrne speaks Tuesday in this screen capture from video of a School Committee meeting.

A draft paper submitted by a high school employee and mayoral aide may be the foundation of the vision statement on closing the achievement gap the School Committee has been talking about for the past several months.

Edward Byrne, project manager for Mayor David Maher, presented a framework for addressing achievement gaps. Byrne, who is also coordinator of student diversity programs at Cambridge Rindge & Latin School, said the project arose from attending a Minority Student Achievement Network meeting last fall. Building on “work already underway in the district,” he said, he used “best practices and empirical research in educational equity literature” to organize a comprehensive approach and suggest some concrete short- and long-term goals toward increasing equity in the schools.

The gap – a problem nationwide – sees white and Asian students far surpassing black and Hispanic students academically, a problem that goes back three decades without improvement. Officials have said it worsened in the past 10 years with the introduction of stricter standards, but Byrne’s approach was cause for optimism.

“This was the highlight in terms of documents that I have read … over my last two years” since being on the committee, member Kathleen Kelly said. “You have so beautifully laid out 10 goals to achieve and an excellent framework to work from. We are in your debt for the work that you have done here.”

Member Fran Cronin highlighted what she saw as a “holistic approach – synthesizing many components” from leadership to budget to after-school support to family hunger.

“Our vision document has been started,” member Patty Nolan said in praise of his work. “It lays out and builds on what we have committed to as a community. We deliver on a lot of it, but we have more work to be done.”

Byrne, who worked with Assistant Superintendent Maryann MacDonald and other administration members, identified goals with accompanying strategies ranging from recruiting “equity-focused leaders” and diverse educators to reexamining resource and enrollment distributions across schools and improving family engagement. The research cited is almost entirely from the past five years and includes a self-published paper from Cambridge parents Leslie Brunetta and Emily Dexter examining resource allocations across the city’s schools.

Members agreed to convene a roundtable in November or December to discuss the document in more length. It’s too late to make the document formally part of the Leadership Profile Report being used in the search for a new superintendent, said member Richard Harding, who with Nolan and vice chairman Fred Fantini serves on the search interview team. But “we may be able to insert this in the process” as the team considers interview questions, he said.

Byrne said it’s his hope that this draft is a “departure point,” with additions, revisions and an “action plan with benchmarks and timelines” to follow. He also hoped it would be circulated widely among the community.

The committee also voted unanimously to roll back most of the 2013 revisions to the controlled choice policy that allocates children to schools. The earlier changes, written under the direction of Fantini and then-member Alice Turkel, were “well-intentioned” efforts to make the demographics of schools more similar, said schools Chief Operating Officer Jim Maloney, but they’ve made managing enrollment “unworkable” and exacerbated families’ confusion.

The goal of controlled choice policy is to achieve socioeconomic parity across schools while honoring family preference. Cambridge uses family eligibility for free or reduced lunch as the measure of socioeconomic status. A target SES balance is set for schools based on the balance of all public school students citywide, with the goal being to give each school the same – or very similar – figures. Using a lottery, the school department places students based on family preference within the parameters of the target balance. While kindergarten enrollment through a lottery remains the primary mechanism for achieving socioeconomic balance across schools, Controlled Choice policy also affects placement of new or transferring students through the eighth grade. 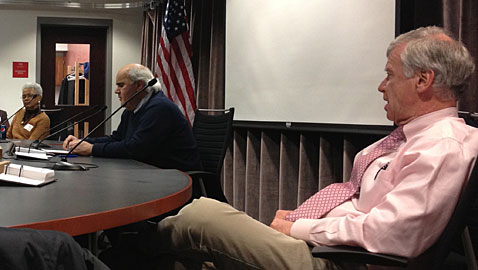 In approving the revisions Tuesday, the committee loosened the guidelines determining allowable balances, returning to pre-2013 methods for calculations and determining how much variation individual schools can have. As Maloney outlined in a May committee roundtable discussion, relaxing the requirements should help lower mandatory assignments – families assigned to a school they did not choose – and allow the school department to manage balance across its dozen individual schools and four upper schools, rather than across 82 individual grades. He called that difficult to manage and “confusing for parents to understand.”

Restoring the band by which individual schools can deviate from the target SES balance by plus or minus 10 percent. The 2013 revision to zero percent for students above kindergarten “was unworkable and impossible to achieve,” the motion says, and immediately put any school accepting transfers or new students out of compliance.

Returning to a three-year average of junior kindergarten and kindergarten balance rather than the single previous year in the target balance for lottery assignments, allowing for year-to-year changes to be absorbed more effectively.

Removing the 2013 revision that kindergarten placement in a school cannot exceed the number of first-grade seats there. The new policy allows up to two “extra” kindergarteners, who, Maloney said, will be safely seated in first grade due to attrition, while lowering mandatory assignments by about 25 students.

In contrast to the heated discussions preceding the 2013 revisions, the response Tuesday to the changes was unruffled. Members acknowledged the difficulties Maloney and his staff have had managing the process, and several members were supportive of efforts to decrease mandatory placements.

The 2013 revisions were meant to go hand-in-hand with the creation of magnet schools, giving each elementary school a unique and attractive aspect, but the Innovation Agenda is focused on giving students a more common experience districtwide.

Harding pointed out to administrators that by “tightening the band, we were trying to make schools more diverse,” but he would support “loosening the band because it is hard for you and parents.” He then asked, “how permanent a move do you think this will be?”

Maloney was noncommittal, saying “nothing’s forever.” Administrators assess the situation regularly to try to minimize mandatory placements, he said, but also to be “reflective of the overall city.”

“Cambridge is still one of the few systems making effort to keep our schools desegregated,” Fantini added as they ended the conversation.

In public comment, several parents representing the Martin L. King Mandarin Immersion Program and bilingual Amigos School, urged the committee to choose a superintendent who strongly supports world language instruction. Mandarin Immersion parent Rosie Jones pointed to the elimination of foreign language instruction in the elementary schools as a result of the district reshaping called the Innovation Agenda. Heather Hoffman, whose daughter went to Amigos, agreed, saying, “Anyone who is not ashamed that schools are forbidden to teach foreign language until sixth grade doesn’t understand Cambridge, and doesn’t understand the world.”

Members also passed unanimously a $680,000 four-year lease renewal for the Thorndike Street administration building, noting that the Boston Archdiocese landlord has been generous with its rate, balancing out the relatively poor quality of the building. This lease goes through October 2019, by which time the administration will either be ready to move into the new King Open School/Cambridge Street Upper School complex or have identified another option, Maloney said.

A $3.3 million contract for out-of-district placement tuitions was passed unanimously after a brief discussion. Though the contract would originally have pushed tuition costs $500,000 over budget, on Tuesday came final word that state aid will be $1 million over the intentionally conservative estimate of schools Chief Financial Officer Claire Spinner. The reason for the higher-than-expected costs, said Spinner and Assistant Superintendent Victoria Greer, was the growing level of need among the students – not higher tuition rates or a surprising numbers of children needing services.

Members also unanimously passed $148,000 in contracts for pest management, nursing services  (with Harding voting present, as he works for Cambridge Public Health), and ice rink rental, as well as $52,000 for one year of providing and teaching the fifth-grade “Know Your Body” curriculum and a $260,000 10-year contract for leasing space at an Oxford Street parking lot. This last item brought a comment from Cambridge Education Association union president Terry Gist, who stressed growing concern among staff about insufficient parking, including at the new Martin L. King School/Putnam Avenue Upper School building. It will, she said, still provide inadequate parking.

The committee also approved launching budget discussions led by subcommittee co-chairs Harding and Kelly (replacing departing member Mervan Osborne), with special interest in having early hearings for teachers, parents and students, although there will potentially be a new committee after November elections; a motion to have the governance subcommittee reexamine problematic issues related to fundraising via the school department website and working with for-profit partners; and getting a report on the status of school playground renovations, bathroom conditions and air conditioning plans.