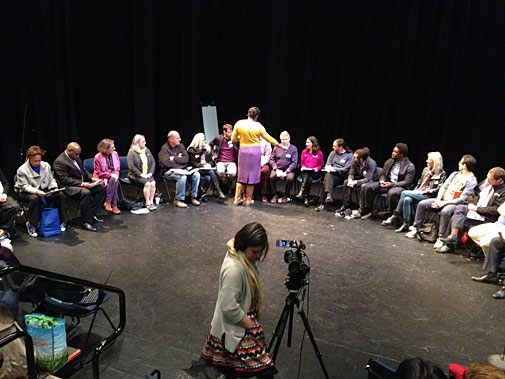 Candidates for City Council and the School Committee prepare for a round of questions Sunday at a Black Lives Matter election forum. (Photo: Jean Cummings)

Black Lives Matter Cambridge’s candidates forum Sunday was billed as an event for black and low-income Cantabrigians to “have a safe space to hold their elected officials accountable for their concerns,” and for the few who attended, it may have delivered.

But, as Minka vanBeuzekom pointed out at the microphone, there were more candidates on stage than there were people in the audience. 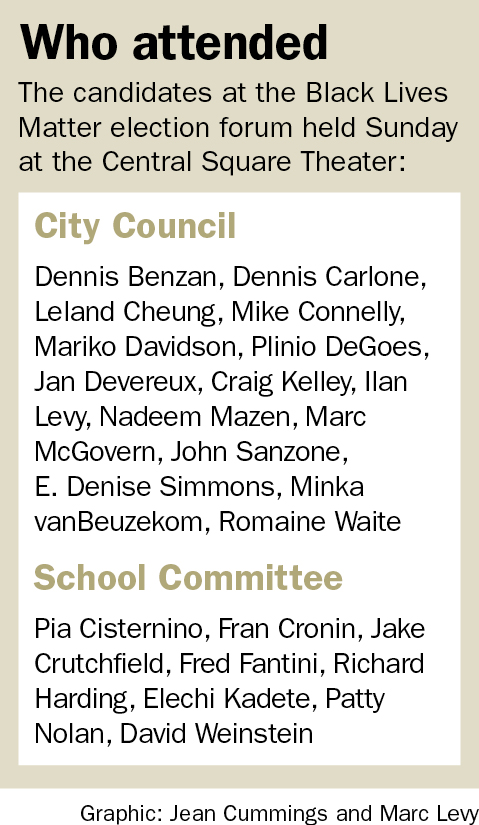 Stephanie Guirand, lead organizer of Black Lives Matter Cambridge and of the event, said the small turnout was expected. “It’s our first candidates forum,” she explained, and it takes time to build interest, but she pointed out that the event was being recorded. “Our audience is stronger online,” she said. “Most of our people go to our website and Facebook page.”

“I thought we were going to have a really serious conversation,” vanBeuzekom said. “I was looking forward to having this whole place packed,” she said gesturing to the mostly empty Central Square Theater space. “I know the organizers made a real effort trying to bring people together, but this small audience points out how hard it is to make this conversation happen.”

The evening started with the political candidates and community members split into four small working groups. For more than an hour they worked through questionnaires on the main issues of housing, education, safety and communication, with questions intended to get community members discussing their concerns with the candidates: Do you feel safe in Cambridge? Do you feel your school gives you enough communication about your child? Are you satisfied with access to and from elected officials?

The groups were overwhelmingly made up of candidates, although longtime councillor E. Denise Simmons opted out of this part of the event. Three had only two community members with five or six candidates, plus a volunteer from Black Lives Matter. One group had five community members.

In keeping with recent conversations in the city, it was the discussions about housing that got sparks flying. In one group, city councillor Leland Cheung was pressed by a community representative who wanted him to “explain why you have taken money from developers.”

Cheung explained that it had been made clear to him that this small group work was the time for the candidates to ask questions of the community, not the other way around. “I don’t want to seem like I’m dodging this,” he said, “but I’m really not supposed to be answering your questions. I’m supposed to be asking you questions.”

“I am confident enough about my own integrity that I don’t care who I take money from,” Cheung finally said. “I would rather take money from people who have lots of it than have to ask for some from my low-income neighbor.” After watching this exchange quietly for some time, the group’s volunteer organizer moved them to the next topic.

“Not a healthy discussion”

But developer donations came up again in the second part of the evening, when the 23 candidates sat in a semi-circle that nearly ran off the stage, facing an audience that at its most had 17 people, in addition to two reporters and a video operator.

After having each candidate introduce themselves in 30 seconds – leading to a few delightfully pithy self-introductions – Guirand asked a few questions selected from notes from the small working groups, with one minute per answer.

The first question: Is race a factor in Cambridge safety? After two white candidates said “yes,” School Committee candidate Elechi Kadete, who was raised in Cambridge and attended Fletcher Maynard Academy, told a story of driving in Cambridge as a teen with five friends – three were white and three, including Kadete, were black. They were pulled over by the police and the police separated them by race, he said. “Those other kids don’t have a future,” police told the white students, according to Kadete.

Guirand’s second question was, she said, “directed at folks who have accepted money from developers. Why do you do it? And what are you thinking long-term about the future of housing?”

That got councillor Craig Kelley rising to say, “The question is not where the money comes from. It’s about whether we build housing. This is not a healthy discussion for Cambridge or for the issues.”

A follow-up question from an audience member pushed the issue more. For the next few minutes, the debate continued: Councillor Nadeem Mazen said “building more luxury housing is not a way to increase affordable housing.” Vice mayor Dennis Benzan, like Kelley, directed his answer toward support of the controversial development Mass+Main as providing 47 affordable units, a “significant” number, while councillor Dennis Carlone shook his head behind him. Council candidate Mike Connolly defended his position opposing Mass+Main (“luxury housing pushes people out of the neighborhood”), followed by Carlone calling for a “complete systemic change” to how Cambridge approaches development.

Guirand, sharply reminding people that she wanted them to answer the question they had been asked, changed the subject to education, where things settled down. The several candidates for School Committee each made points about ways in which the district is aware of and working to improve staff diversity, and creating more opportunities for all students during and outside of the school day, as well as through preschool opportunities. Council candidate Romaine White, another Fletcher Maynard Academy alum, spoke from his experience in saying “we need to give kids options for the real world” and build a community that will provide real jobs for them here.

Asked about the district laying off black teachers – a nationwide issue, but less of one in Cambridge – Richard Harding said, “At the end of the day, I don’t care if you are white or brown or green. If you are not doing what’s right for my daughter in your class, then you shouldn’t be there.”

Near the end of the event, several candidates urged that each of their colleagues got an opportunity to be heard, prompting a series of one-minute speeches trying to get in key issues. Council candidate John Sanzone, saying he wasn’t sure what he should talk about, ended up saying that he supports access to quality transportation, including walking and busing, seeing it as “a justice issue.”

Guirand responded as she shifted the microphone to another candidate, “I just want to remind you that this is a Black Lives Matter event and you should talk about black people.”

Cheung ended the event. Guirand had mentioned to the candidates that after the event each one could approach the video camera and make a one-minute statement that would go out to their membership through Facebook and the website. Cheung, the only candidate not to speak at least once in this panel presentation, took the mic, turned slightly towards the video camera, and went through a list of items he wanted people to know about, including a report on community policing and the participatory budget process, and called for no more California campaign donations – a dig at Mazen, who has been attacked for criticizing donations from developers but taking donations from friends in California. He ended up sending love and thanks to his wife (“Hi, Honey!”).

(In Cheung’s recollection of events, gleaned in discussions since the event, his reference was not to “California” donations but to the broader area of “outside spending,” including a reference to U.S. Sen. Elizabeth Warren’s Peoples’ Pledge to limit campaign spending, especially by non-candidate or party groups, and even pay a penalty if an outside group violates the rules.)

Simmons told citizens not to worry about discord among whatever set of councillors might win the election, because ultimately they would all get along. She made a point of quoting an African proverb: “When the elephants fight, it’s the grass that suffers.”

Some candidates were clearly surprised at how the event turned out – they had hoped to talk with more voters. But several of them thanked Black Lives Matter in public statements during the event, and in comments afterward, for making the effort. Many said they looked forward to developing ways to have safe ways to have “these difficult conversations about race,” as council candidate Mariko Davidson said, “and to give our community permission to ask questions.”

The forum will be televised at 4 p.m. Oct 24 on Cambridge Community Television.

This post was updated Oct. 21, 2015, to reflect Leland Cheung’s recollection of events.