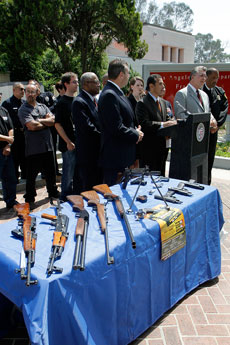 Cambridge is planning a gun buy-back similar to one run last year in Los Angeles. (Photo: Office of Antonio Villaraigosa)

City councillors are making a gun buy-back program just the start of anti-gun efforts in Cambridge. A request for the city manager to look into such a program got unanimous approval Monday, while the council looked briefly split on which of its committees would get the chance to figure out what else will be done to ensure violence doesn’t result from the city’s roughly 1,008 firearms licenses and unknown number of weapons.

“Gun safety is a lot more complicated” than a buy-back, councillor Craig Kelley said, suggesting his Public Safety Committee take on the issue before City Manager Robert W. Healy and his staff be asked to do so.

“It’s a very important idea. I would like to wrap it in the context of community conversations, which I am certainly willing to do in the Civic Unity Committee … it has to be looked at in a wider context,” said Denise Simmons, who leads the Civic Unity Committee, and when Marjorie Decker spoke she gave a nod in the direction of Simmons’ committee as well.

Most councillors – including Tim Toomey, also a state representative who said he has fought for a one-per-month limit on gun buying (“You’d think 12 a year would be enough,” he said) and a requirement that gun owners carry liability insurance – said clearing weapons from the city was too important to wait.

It was Ken Reeves who proposed letting the mayor’s order for a gun buy-back program get started, but adding a look by Kelley’s committee to it. The amended order was the one accepted by the council.

The council also approved a look at renaming the Area IV neighborhood, where many residents dislike having a number given as identification for use by police or city planners instead of attractive descriptive names such as Strawberry Hill or Riverside (which was once called The Coast). The issue has been before the council in years past, but without the same success of Huron Village, which Mayor Henrietta Davis noted was branded when Sheila Russell was mayor in 1996-97.

Once again, Kelley led resistance to the move by noting other financial pressures on the city, including a $400,000 shortfall for the popular Upward Bound program the city was moving to fill from its free cash fund and an upcoming school district gap of more than $2.3 million, as why Healy’s office had better things on which to spend its time. “I fail to see any overwhelming or even underwhelming support for the change,” he said. “Absent my feeling that there is a lot more interest in that community in changing the name, I would not want to ask the manager to spend any time on it.”

Councillor Minka vanBeuzekom, who lives in Area IV, said she’s come to like the name, which she said had been adopted as a point of pride by an upscale restaurant and design company. She wouldn’t stand in the way of the name-change proposal by Simmons, she said, but she didn’t feel an upswell of feeling about it in the neighborhood.

A problem arose from the clear favorite for a name change: The Port.

While Simmons didn’t identify The Port as the preferred name in the order asking Healy to look into an official process, it was the name she, other officials and citizens who commented said was the favorite. It was the original name of the area, when it was to be home to an actual port, but backers of a change say it was “hijacked” by the neighborhood to the south – Cambridgeport.

Reeves said he’d gotten five e-mails opposed to the change, including from a 15-year resident, in part because it would be “needlessly confusing” to have abutting neighborhoods called The Port and Cambridgeport.

Healy agreed, and pointed out that there’s no legal reason the neighborhood is called Area IV. While there’s been repeated references to the name as a police designation, “Area IV” actually came from city planners in 1953. They chose to do 13 studies of city neighborhoods, Healy said, expressing some amazement they didn’t do 11 that conformed with existing voter wards.

But with no legal reason to be called Area IV, the neighborhood could call itself whatever it wanted. “Go name yourself,” Reeves said, with Healy later adding: “If there is agreement amongst neighborhoods, and I don’t know how you do that.”

Simmons noted that “Area IV” does appear on city documents, and said a process explained by the city manager’s office would help residents understand better what was at stake.

When it came time for a vote, all councillors but Kelley agreed to a city process for a potential Area IV name change.