Five things Slate for Cambridge can change after being voted into City Council on Nov. 3 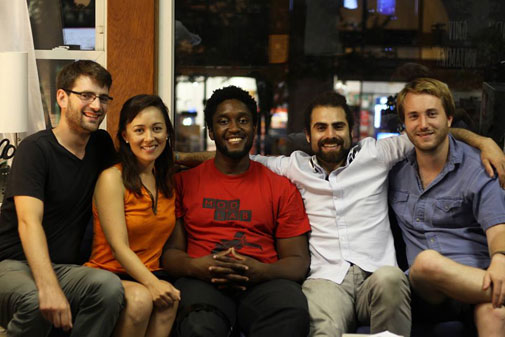 Five things Slate for Cambridge can change after being voted into City Council on Nov. 3

Slate for Cambridge, the young, justice-oriented group of Cantabrigians running for public office, deserves our righteous applause and top votes in the upcoming election.

The slate of candidates includes Mariko Davidson, Nadeem Mazen, John Sanzone and Romaine Waite for City Council and Jake Crutchfield for School Committee. It wants to wipe the status quo aside and address pressing issues with an urgency we desperately need. There are a number of reasons we should be giving new candidates a hard look, instead of reflexively voting in familiar names.

Cambridge has climate change on the back burner. Our current council won’t demand multinational developers (or Harvard and the Massachusetts Institute of Technology) go net zero on greenhouse gases, and summarily rejected our own development department’s goals of protected bike lanes on major streets. Despite engineer and scientist confirmation that climate change will cause the Charles River and Amelia Earhart dams to be breached, with hundreds of millions of dollars of damage resulting (and our most disadvantaged neighbors bearing the brunt of this suffering), we’ve collectively exercised more political will debating corporate development than organizing regional protection and resilience plans. Slate for Cambridge members, on the other hand, have revived abandoned plans for transit improvement and demanded the city catch up to Boston in implementing protected intersections and Vision Zero.

The current City Council (with the exception of councillor Mazen) have green-lighted Cambridge police militarization, ignoring a a stockpile of assault rifles, a new BearCat armored vehicle, sniper teams and a perpetually increasing police budget, despite plummeting crime rates. Mazen has been the only strong critic of a military police, despite obvious evidence from Los Angeles, Ferguson, Mo., and New Orleans that this disproportionately endangers low-income and minority residents.

Much of the current political establishment has claimed office for an unhealthy amount of time – up to a quarter-century! Slate for Cambridge promises self-imposed term limits. A healthy democracy relies on committed community members cycling in and out of public service, not monopolized representation.

The current council has signed off on national corporate development fantasies, ignoring the objective academic truth that Cambridge alone cannot meet the housing demands of the entire region. Slate for Cambridge has advocated for development that respects the wishes of local residents and promises to unleash fewer damaging real estate externalities. Even John Sanzone, a strong pro-development candidate, acknowledges that the current council has done significant disrespect to neighborhoods with little benefit to housing costs.

This isn’t to say that the current council hasn’t worked hard for Cambridge and doesn’t care about this city – it is only to say that we’ve become complacent and satisfied by the status quo. Corporate real estate donations guarantee incumbent councillors a hefty campaign war chest, meaning there is little pressure on incumbents to make change in arenas of desperation. Slate for Cambridge is rejecting corporate real estate donations, not because its members don’t support and believe in the role development will play in our future, or the significant benefits of an expanded tax base, but because they believe it is unethical to take thousands of dollars from businesses interests and subsequently vote on their projects.

Slate for Cambridge deserves a strong look. Email them, call them, Facebook them – ask them why they’re worth your vote.

Joseph Poirier has has been a political volunteer for all of the slate candidates and has donated to all or most of their campaigns.