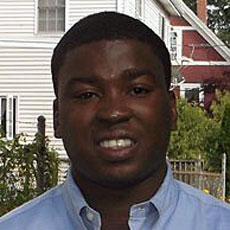 Elechi was born in Tanzania, East Africa. He came to Cambridge when he was 4 and got his entire elementary and high school education in the Cambridge Public School System. He attended the then Joseph Maynard Elementary School, Mariah Baldwin School and Cambridge Rindge and Latin High School. For college he first attended Green Mountain College in Vermont, then transferred to Brandeis University, from which he graduated with a bachelor’s degree in business with a minor in politics in the Class of 2012.

Elechi works in Cambridge at Partners Healthcare in Boston. This is his second campaign for School Committee.

Closing the achievement gap. The current generation of students has the potential to achieve the highest degree of expertise in any field they choose. Helping our young people access online educational platforms such as Khan Academy, which offers personalized learning in a multitude of subjects, can create a reduction in the achievement gap.

World language instruction and K-5 language immersion programs. The World Languages and K-5 Language Immersion Programs are vital as we prepare our future workforce for an increasingly competitive world. In the past, international powers found that learning English was necessary for success. Our children will be expected to be fluent in languages as the world globalizes further.

Early education. We have seen that universal junior kindergarten is not accessible to all our children. I strongly believe the Cambridge school system can open its arms to all of our children.

In his second campaign, Kadete is vibrant and enthusiastic. He brings a fresh perspective as someone who has recently gone through our public schools, and as a student who seemed to bridge different populations at Cambridge Rindge and Latin. His lack of experience in civic life, though, will give him a steep learning curve for translating his observations about the strengths and weaknesses of our school system to actions he can advocate on the committee. He has good goals but falls short in making clear his ideas to achieve them.