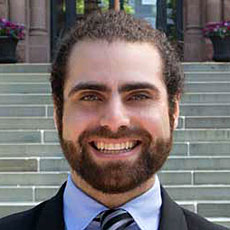 Nadeem Mazen moved to Cambridge for undergraduate and graduate work at the Massachusetts Institute of Technology but “fell in love with the city” and stayed to open two small businesses in Central Square: danger!awesome, which does retail prototyping and design and teaches the principles of working with equipment such as laser cutters and 3-D printers; and Nimblebot.com, which makes educational media and software for social entrepreneurs and also provides access to cutting-edge technology and job training.

Mazen also holds a faculty position at the School of the Museum of Fine Arts, where he teaches entrepreneurship and small-business practices. He has worked with The Boston Globe on a streaming Web television project and took the Adfest silver medal for directing a video with the band OK Go for the song “Last Leaf.”

He vows to stay in office for only four to six years before returning fully to the private sector, and intends to use technology to engage more residents in civic issues via a practice he calls “byte-size politics.” He was elected to the council in 2013.

Mazen is running with the Slate for Cambridge with council candidates Mariko Davidson and Romaine Waite and School Committee candidate Jake Crutchfield.

Mazen has maintained a relentlessly positive public face despite nearly as relentless attacks on his character and attempts by other councillors to obscure his policies – such as efforts on the campaign trail to paint his vote against zoning for a large development in Central Square as a vote in favor of a large office building, although he made clear while voting that he was concerned that the tower being portrayed as helping affordable housing would hurt far more people than it helped. In his attempt to just get that information, he asked in March with fellow councillors Dennis Carlone and Craig Kelley that the city forward its study on the topic to the City Council; when the zoning vote came up in May, the long completed draft report was still nowhere to be found.

He has also asked for a look at a progressive tax structure so Cambridge residents who don’t need a universally applied property tax break don’t get it, which would result in more money to spend on housing affordable to everyone. This has been painted on the campaign trail without that nuance, as though Mazen just wants to raise taxes on everyone, including the house-rich but cash-poor who bought in Cambridge before real estate prices soared, then soared some more, then soared some more just for the hell of it.

Over the past couple of years, Mazen has tried to get the city to negotiate more from a position of strength when it comes to development and other business demands, and he held the unpopular view of wanting real estate developer “linkage” fees to be applied at the consultant-defined ceiling of $24.30 a square foot, rather than at the $12 level where most councillors felt comfortable. This somewhat radical suggestion is another that got several of the other incumbents gnashing their teeth, drawing an ongoing outsized reaction from a council that has tolerated with far less venom a fairly steady trickle of iconoclasm and protest votes from Craig Kelley over the past decade. Mazen’s move to let the public see a “roundtable” meeting about a citywide development master plan process was killed by councillor Tim Toomey, who’s been on the council for more than a quarter-century and somehow never heard of the concept before. He said, essentially, that the bid for transparency on the meeting was too confusing and “political” to deal with.

For the young, tech-savvy and diverse voters Mazen brings to the electoral process, that may be a good anecdote-turned-metaphor to take into the voting booth: When televising a meeting of widespread interest and great importance is too confusing and “political” for more long-term councillors to handle, it’s dead certain that the one to return to his council seat is the one who can grasp and at least attempt the concept.