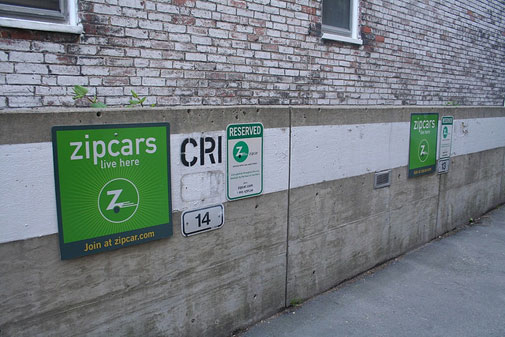 There are 280 Zipcars in 82 locations throughout Cambridge, a city memo says. (Photo: Christopher Schmidt)

The memo was presented Monday, just as the City Council advanced laws for car-sharing services such as Zipcar and Turo, which have helped lower the number of cars residents need to own by placing 321 shared vehicles in 91 locations throughout the city. One shared vehicle equals up to 13 privately owned ones, according to a Traffic, Parking & Transportation report from Nov. 18.

Sixteen percent of respondents in a January survey said that after joining a share program such as Zipcar and Turo they got rid of their car, and 26 percent said they didn’t buy a car or second car when they otherwise would have. The survey, cited in the report, was of 977 residents.

The city, which has six T stops and numerous bus stops, also has a robust program encouraging bicycle use – local surveys have found about 150 bicycles for every 100 households in the city, and up to 9 percent of residents using them to commute to work – and is considered a walkable city. Zoning is also used to limit the number of parking spaces available in the 10th-densest incorporated city in the country, and the city has recently been adding paid hours and ratcheting up the costs of parking in retail-heavy areas.

“I was a little surprised the numbers were as low as they were, but they sort of confirmed what we’ve been trying to accomplish with our overall transportation policies,” said Joseph Barr, director of Traffic, Parking & Transportation, referring to parking permit figures. “It’s further evidence those policies are being successful.”

“It tells me we’re getting close to finding a good balance” between serving residents with cars and encouraging them to fund other ways to get around, Barr said. “It’s a process of constant adjustment.”

The memo of resident parking permits does not equal the number of cars. Anyone with offstreet parking, such as a driveway or lot, might not spring for one; people living in higher-end buildings with garages, such as Vox on Two (meaning on Route 2, also known as the Concord Turnpike), have less need to get a parking permit that allows them to park on the streets in their neighborhood – and probably don’t even have street parking options within a mile of their homes, Barr said.

The Alewife example drew the attention of city councillors such as vice mayor Dennis Benzan who were pleased to find that large amounts of development in the Alewife area weren’t necessarily to blame for its often punishing traffic jams. “Part of the intent behind this was to determine if new housing development was contributing to traffic in our city,” Benzan said. “My conclusion from this is that the traffic we have in our city is not coming from this new development.”

The citywide master plan getting underway will include a traffic study to answer such questions, Barr said, but “our sense, particularly at Alewife but in other locations around the city as well, is that a lot of the congestion we see is people traveling who have no origin or destination in Cambridge.”

“As much as we do our best to try to get people not to drive, it really depends on more of a regional approach,” Barr said. “That’s not an easy one to solve.”

The memo said that a larger residential developments, such as in Alewife near the area’s red line T stop but more likely to have a dedicated parking garage, might have extremely low rates of resident parking permits per unit – only 0.13 at Vox on Two, accounting for 30 permits for 227 units, for instance – while one in a more typically residential neighborhood would have a significantly higher rate. Mayor David Maher drew attention to 40 Norris St., between but far from the Alewife and Porter Square T stops, where the former North Cambridge Catholic High School was turned into apartments in a 2011 zoning vote. In that building, there are 35 permits for 25 units, for a rate of 1.40 cars per unit.

The issue of parking garages obscures the meaning of the numbers, though.

Other findings in the memo:

Well over half of residents commute to work by walking, cycling, taking mass transit or carpooling – 63 percent in all.

Although the car-sharing zoning discussed Monday by the council has the potential to bring more vehicles owned by Zipcar, Turo or others to the city, councillors said that shouldn’t mean surprises for residents if approved in a second reading. The zoning sets rules for hosting shared cars in parking lots, but not on city streets or the driveways of single-family homes. It keeps private cars the priority in lots, although councillors reminded that any displacement of private cars by a shared car will be small, because the presence of a shared car typically replaces the need for several private ones.

“There’s a lot of misconception that all of a sudden there’s going to be Zipcars in people’s driveways in residential areas, which is not the case – it’s not in this zoning and it’s not Zipcar’s intention whatsoever,” councillor Leland Cheung said. “Zipcar, from my discussion with them, pretty much has the footprint in Cambridge that they want to have … we’re not going to see because of the zoning, a lot more cars parked on our streets.”

“They pretty much have what they need to serve their members, which is 10 percent to 20 percent of the Cambridge population to begin with,” Cheung said.

Asked if they would like car-share vehicles in residential areas in private, offstreet parking spaces, 85 percent of respondents in a 1,070-person citywide survey said they would, including a response of more than 80 percent in West Cambridge, which has almost no car-share vehicles available.