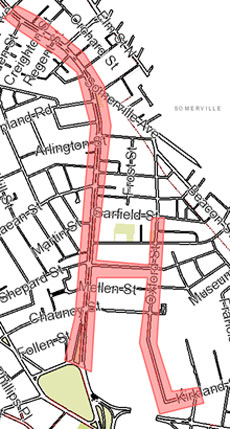 Metered parking between the squares now stretches from 8 a.m. to 8 p.m. on Massachusetts Avenue and surrounding areas, at $1 per hour.

The changes extend through the Agassiz neighborhood, which includes businesses along the avenue and plenty of Harvard and Lesley University property to the south, but also extensive residential parking needs.

The additional revenue is “conservatively” estimated at $58,000 per year, said Brad Gerratt, deputy director of Traffic, Parking and Transportation.

The extension of meter hours in Kendall were estimated to bring the city another $110,000 per year in meter revenue, he has said. Data collected from meters in Kendall – albeit complicated by the bad winter weather extending long after the Jan. 12 changeover – indicated that after the change, drivers were leaving spaces sooner and allowing for more turnover, said Joseph Barr, director of the department.

That means more parking availability that helps bring customers to area businesses, which Barr said was also the hope for the changes in Agassiz.

“This section of Massachusetts Avenue has a great mix of restaurants, stores and services that create a vibrant and interesting experience for residents and visitors, and we want to help support this neighborhood with how we manage our streets,” Barr said in a press release. “Extending the hours on the meters will help create more parking opportunities for patrons visiting local businesses, contributing to the ongoing success of this unique part of Cambridge.”

But metered parking spaces being free and unrestricted from 6 p.m. to the following morning led to some use of the spaces as overnight parking, Barr said.

“The new hours will help limit this practice and ensure that the spaces are used as they were intended – to increase parking options for visitors and residents,” Barr said, although the new restrictions are also likely to make it harder for residents to park overnight by adding two hours of metered time.

Still, the changes hadn’t provoked much neighborhood chatter yet, said Wendell Street resident Wendy Prellwitz, a director of the Agassiz Neighborhood Council. The council meets monthly but is largely off for the summer.

The changes would “probably come up in September,” said Prellwitz, who explained that her own use of metered spaces was limited to when she couldn’t find street parking where she could use her resident parking permit.