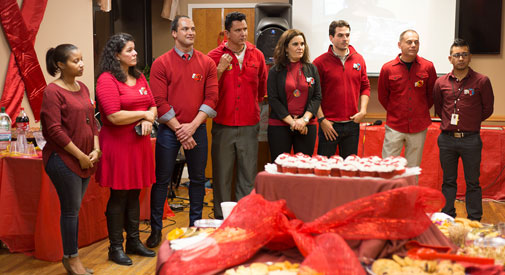 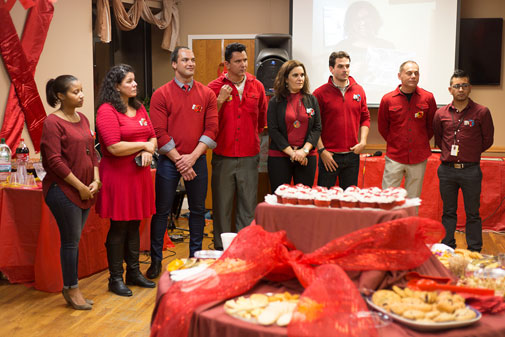 The Massachusetts Alliance of Portuguese Speakers HIV/STI Prevention and Screening Team is recognized at a Dec. 4 ceremony and celebration for its work on disease prevention.

From Massachusetts Alliance of Portuguese Speakers, Dec. 10, 2015: Almost 40 community members, staff, volunteers and friends attended the World AIDS Day commemoration event put together by the Massachusetts Alliance of Portuguese Speakers on Dec. 4 at the organization’s Cambridge office at 1046 Cambridge St. The event, which featured live Brazilian music by local artist Bill Ward, delicious food, multimedia presentations and a roundtable discussion, was also attended by the consul-general of Brazil in Boston, Glivânia de Oliveira.

Jamel Newsome, a community health worker for Cambridge Health Alliance and former MAPS employee, shared with the guests some of her experiences working closely with Portuguese-speaking communities in HIV prevention and education – a job she performs “with all her heart.” She highlighted the fact that, even though there are still risk behaviors associated with HIV, no one is immune to the disease, which makes it that more vital to keep promoting the importance of safe sex and knowing your HIV status.

Ana Ornelas, a Brazilian psychologist and sexologist who recently moved to the United States, reminded attendees of the story of the late Brazilian sociologist and activist Herbert de Sousa. After contracting HIV via a blood transfusion, de Sousa founded the Brazilian Interdisciplinary AIDS Association and fought tirelessly against discrimination and hunger in Brazil.

de Oliveira congratulated MAPS for educating the community about HIV prevention and called for a “cultural change” to put an end to misinformation, prejudice and discrimination. MAPS executive director Paulo Pinto acknowledged major funders of the organization’s HIV/STI Prevention and Screening Services, including the Centers for Disease Control and Prevention and state Department of Public Health. He highlighted the fact that MAPS provided free, quick and confidential HIV/STI testing to more than 500 people just in the past fiscal year. “This year, we hope to surpass that number, testing at least 1,000 people,” he said.

Milena Mello, director of the agency’s HIV/ STI Prevention and Screening Services, thanked her staff for their dedication and hard work and presented a certificate of recognition to the many volunteers attending the event, whose help and selflessness “are vital to the success of this crucial program.”

The HIV/STI program offers testing and risk reduction information regularly at the health and social service organization’s offices in Somerville, Brighton and Dorchester, as well as free weekly walk-in clinics in those three offices and MAPS’ Framingham location.

For information or to schedule an appointment, community members may call the Somerville office at (617) 764-2091, Brighton office at (617) 787-0557 or Dorchester office at (617) 825-5897. The agency also provides a variety of other health and social services at all those locations, as well as its other offices in Cambridge and Lowell. Visit maps-inc.org to learn more.