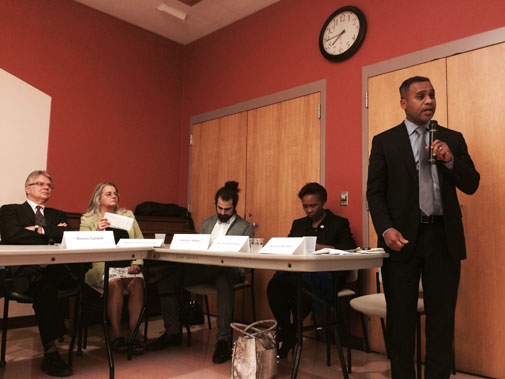 Departing vice mayor Dennis Benzan is considering a run for the state Senate seat of Anthony Petruccelli, who is leaving to join a Boston lobbying firm.

Speaking after a Monday roundtable about transportation, Benzan said the botched green line extension plan was one reason he wanted to run – because the region, as well as Cambridge, could benefit from the passion he would bring to Beacon Hill on issues such as mass transit, housing issues, the opioid drug crisis and workforce training around science, technology, engineering, arts and math.

“I would also serve as a bridge between underserved communities and the State House,” Benzan said. “We have accomplished a great deal on the council in last two years, and the state can benefit from what we are doing in Cambridge. I want to provide that leadership, so I am taking a strong look at the seat.”

He is not currently in Petruccelli’s First Suffolk and Middlesex District, which includes parts of Cambridge, Beacon Hill, East Boston, the North End, Revere and Winthrop, but he has been looking for a larger home for his family – and this would require a move of only three blocks. His political base extends outside of Cambridge, he said, “to East Boston, Revere, Chinatown and parts of Back Bay as well.”

Petruccelli, a Democrat who lives in East Boston, was elected to the House in 1999 and moved to the Senate since 2007. He announced Dec. 4 that he will be joining the firm Kearney, Donovan & McGee. His leave-taking in January will trigger a spring special election to fill the seat.

Revere Mayor Dan Rizzo has been named as a potential candidate for the seat, along with Winthrop attorney Joseph Boncore. On the North End Waterfront website, reporter Conor Finley listed other potential entrants in the race:

Beacon Hill’s Rep. Jay Livingstone, Rep. RoseLee Vincent of Revere and Rep. Adrian Madaro of East Boston. City Councilor Sal LaMattina from East Boston could throw his hat into the ring as well as the North End’s Stephen Passacantilli, aide to Boston Mayor Marty Walsh and formerly LaMattina.  Also from the North End, former City Councilor At-Large candidate and President of the North End / Waterfront Neighborhood Council, Philip Frattaroli is considering a run. Frattaroli is a small-business owner with his Ducali Pizzeria and plans to open Cunard Tavern next year in East Boston.

Benzan is a lifetime Cantabrigian: He grew up in Columbia Terrace, graduated from Cambridge Rindge and Latin School in 1990 and went to Howard University and the Roger Williams School of Law, working his way through college as a carpenter and builder while squeezing in time to direct the City of Cambridge Youth Summer Jobs Program in the early to mid-’90s. His first experience organizing was in high school, when he formed Students Against Violence and for Equality in response to the violent death in the community of two young men, Jessie McKie and Rigoberto Carriòn. Later he worked as a community organizer for the Cambridge Algebra Project, which promotes math literacy.

He is a senior associate at the Altman & Altman law firm in Cambridge. He is the father of 8-year-old twins, India and Matteo, and the husband of Tanya Bacci-Benzan, an upper school vice principal in Cambridge. He has a brother who is a Cambridge police officer, and another brother managing restaurants in the Boston area.

He was elected to his first council term in 2013, and his fellow councillors elected him vice mayor.

Benzan was a confident candidate in the fall election season, and many were shocked when he lost his council seat in the Nov. 3 count. The city’s ranked form of proportional representation voting left Benzan out of a seat despite his 1,159 No. 1 votes – ninth-highest in a nine-seat election. Dennis Carlone, a first-termer like Benzan, got 157 fewer No. 1 votes, but kept his seat.

He previously ran for the state Senate in a 2010 special election to fill the seat vacated by Anthony Galluccio. Before that he ran for the state House in 1996 and 1998, losing that year to Jarrett T. Barrios.