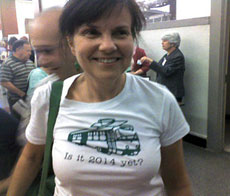 City manager warns: ‘It’s going to get worse before it gets better’
By Marc Levy

Karen Molloy, of Somerville, wore a custom T-shirt to a 2010 meeting about the MBTA green line extension, back when the project was expected to be complete in 2014.

The MBTA green line spur to Somerville’s Union Square from Lechmere – which affects Cambridge’s nearby Inman Square as well – is just as vulnerable to budget overruns and potential cancellation as the rest of the state’s stalled Green Line Extension project, said Joseph Barr, director of Cambridge’s Traffic, Parking and Transportation department.

Even Lechmere, where an existing green line station is to be moved closer to the NorthPoint neighborhood, is at risk.

City councillors heard the news Monday at a transportation roundtable coincidentally scheduled to be held only hours after a state-level transit meeting.

“It’s not a rosy picture,” said City Manager Richard C. Rossi, explaining that he expected more information Tuesday or Wednesday that could provide a look at the future of Lechmere, Union Square and other projects.

The light rail extension took shape in 2009 as a $600 million to $1 billion project with seven stops in Somerville and Medford stretching to Route 16. The rethinking began quickly, though, with that final stop moved to a second phase for lack of funding by the summer of 2010 – a time most stops were still expected to be installed by the end of 2014. 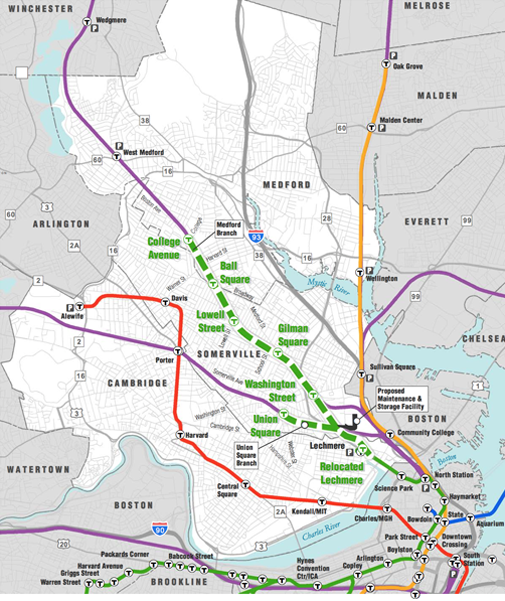 “By far the most expensive”

This year, it was revealed costs have ballooned to up to $1 billion more than anticipated, with the federal government to provide $996 million of the $3 billion price tag. All of the contractors and consultants have been fired, and the project could be scuttled entirely if costs can’t be lowered, despite the state being legally obligated to finish the project as part of a clean-air settlement related to the Big Dig.

“If they cancel the project, there would almost certainly be a lawsuit from the CLF,” Barr said. It was a state settlement with the Conservation Law Foundation environmental group that led to transit commitments such as the extension project.

Still, Barr said, “If built as budgeted, this would be by far the most expensive light rail project in the United States.”

Rossi said he expected to hear from Secretary of Transportation Stephanie Pollack that the state was going to hire new consultants and start the process over again. “This will be a long process,” Rossi predicted. “It’s going to get worse before it gets better.”

Media reports said the board is considering saving money by cutting late-night service again, bringing back alcohol ads and shrinking the service area for The Ride, which serves people with disabilities.

Since the state plans to provide no more money toward the project, keeping it on track will depend on finding more federal dollars or funding from third parties such as the Boston Metropolitan Planning Organization or developers – or asking for money from the cities that will benefit most, including Cambridge.

Having heard the warnings, Mayor David Maher closed out the meeting with an expression of shock. “I’m totally perplexed how the state was so far off” in its cost calculations, he said. “It seems to me the taxpayers should be raising hell and saying, ‘How did this ever happen?’”

“It’s a shame what happened with that green line,” he said.

Green line station plans have been elaborate and extensive, but “reducing costs could involve scaling back station design,” Barr said. The green line extension stops could wind up being more like the bare-bones stations to the south rather than like full, premium stations such as the new Assembly Square stop on the orange line.

Revised designs are expected by the spring, Barr said. Union Square could become a one-track shuttle rather two tracks of light rail, or even be a bus shuttle. Lechmere could lose its escalators and turnstile-style fare control and use the slower system used elsewhere on the green line trolleys, so riders have to board at the front where the driver sits.

“Our goal is to see the project move forward. We would not support canceling the project,” he said.

But Rossi, confirming that design reductions and requests for financial contributions were likely in the city’s future, suggested there were limits to what could be done locally.

The developers of NorthPoint, which would host a relocated Lechmere station, has already invested more than $40 million in preparation for the project and told the MBTA it’s willing to take on some maintenance after the project is built, Rossi said, “but there’s a big leap” to taking on the costs of construction. The 42-acre private development changed hands in August from HYM Investment Group to Divco.

“As information comes to us, we will bring it forward,” Rossi said, “but we might be seeing a much longer delay.”

A rendering imagines the Lechmere T stop after it is rebuilt in the NorthPoint neighborhood. (Image: MBTA)

There could be one positive aspect to the green line troubles, according to Barr and councillor Dennis Carlone: By paying more of the costs for Lechmere, the city should get more input into its design.

“An earlier design from the 1980s had a major architectural expression,” Carlone said. “The current design has none of that. It’s a suburban station.”

Overall, the green line extension project was supposed to move Cambridge’s Lechmere stop to the NorthPoint development side of Monsignor O’Brien Highway; add a one-stop spur to Union Square, roughly where Prospect Street and Webster Avenue meet; and lengthen the line through Somerville into Medford, including to Brickbottom, Gilman Square, Lowell Street, Ball Square, College Avenue and finally to Route 16, to a site near the Starbucks, Whole Foods Market and U-Haul depot.

In Union Square, where real estate prices have been skyrocketing in expectation of the T stop coming in, a plan by Somerville officials designated nearly 117 acres there into a revitalization district where the city would acquire seven key “development blocks” for future disposition to developers.