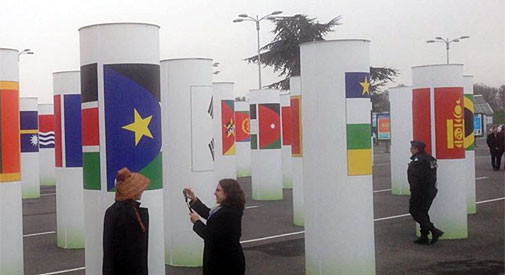 The 21st Conference of the Parties concluded this weekend in Paris, producing the first-ever global climate change agreement. Through the agreement, all 196 countries in the world have confirmed their intention to keep temperature rise “well below 2 degrees Celsius above pre-industrial levels and to pursue efforts to limit the temperature increase to 1.5 degrees Celsius.” Residents of Cambridge, and the United States more broadly, may wonder what relevance such an agreement has to us, especially as it does not specify any measures that must be taken to reduce our contributions to climate change.

As president of the Climate Action Business Association, and through the sponsorship of the American Sustainable Business Council, I was able to attend the second week of the conference in Paris as an observer. As members of the civil society, and officially recognized as non-party stakeholders, we had direct access to negotiators, United Nations and U.S. officials and globally recognized climate activists. I got to see the process up close and personal, and while the agreement was reached through negotiations by government officials, it is ultimately all about us as residents of this planet.

Precisely because the agreement does not specify how we are to achieve the unprecedented and drastic reductions in emissions required to achieve the goal of returning below 1.5 degrees Celsius warming by the end of this century, the result depends entirely on us. The battle for climate safety will be fought and won at the city and state level in the United States, especially with our Congress still completely wrong-footed on the issue. If the Paris Agreement called COP21 is to mean anything to our future, it is up to us to take serious action on climate change, and we can do a lot right here in Cambridge.

As a member of the Cambridge Climate Action Protection Committee, I helped advocate for the recently completed Climate Vulnerability Assessment that will soon lead to a climate adaptation plan for Cambridge. As president of Green Cambridge I’ve helped bring about the 25-year Cambridge Net Zero Action Plan that is to take greenhouse gas emissions from all buildings in Cambridge to zero by the middle of this century. We are calling for a similar plan to take our transportation emissions to zero by midcentury as well.

By taking such actions on climate change, we are not only doing our part in reducing our own emissions and protecting ourselves in Cambridge, but also helping to set an example other communities can follow. Already I’ve been traveling to neighboring communities with former mayor Henrietta Davis to spread the word about our Net Zero Action Plan, and we plan to continue next year.

I returned from Paris on Sunday, euphoric with joy at our achievement – not because the Paris Agreement will solve climate change, but because it gives us, for the first time in history, the global mandate we need to take the necessary action that gives us a chance to survive. The real work begins now, and unlike most international agreements, this one offers all of us, every single person, countless opportunities to contribute directly to its successful implementation. We’re all in this together, and we can all be part of the solution.