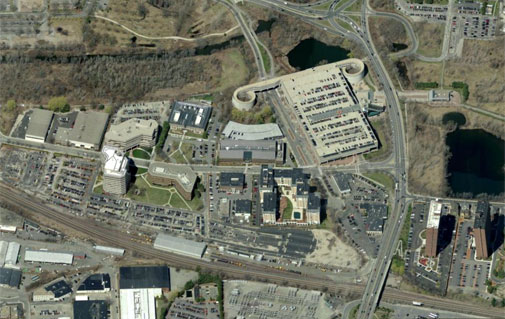 The Fitchburg rail line, seen running along the bottom of this photo, could be covered over by a platform and get an Alewife commuter rail stop in a plan discussed Monday by city officials. (Image: Bing)

The booming population in Alewife is remaking the pedestrian and bicycle bridge over the North Cambridge railroad tracks before the bridge has even been built.

A couple of years ago, city planners explored it as a $20 million bridge from Cambridgepark Drive to Fawcett Street, a revival of an idea in the 2005 Concord-Alewife Plan to connect the so-called Alewife Triangle (the 60 acres north of the commuter rail tracks and between the Alewife Reservation and Alewife Brook Parkway) and Quadrangle (the 130 acres south of the tracks between the Cambridge Highlands neighborhood and an area shopping center). The City Council awarded $375,000 in August 2013 for a design study.

The concept emerging from Monday’s meeting of the council is for a potentially $50 million passageway and commuter rail station on a platform over the tracks, with “air rights” sold to businesses to help pay the costs. The council agreed unanimously to fund a $190,000 feasibility and design study – including a look at how to handle an adjacent rail repair facility.

“The idea of building a commuter rail station in Alewife has been looked at in the past, but the density of development was not enough to support a station,” Iram Farooq, assistant city manager for community development, said in a letter to the council. But with the building of thousands of units of housing and identification that ongoing traffic issues result in large part from nonresident drivers passing through the area, an examination since 2013 “favorably compares this to similar commuter rail stations in the Boston area.”

The commuter rail stop would be Cambridge’s second on the red line and Fitchburg rail line, and only two stops from the existing connection at Porter Square. But a study last year showed Route 2 carrying 53,000 average vehicles per day and the connecting Alewife Brook Parkway about 45,000, with weekday entrances at Alewife Station increasing 19 percent since 1998. The state Department of Transportation expects growth in bus and T trips as well, and a commuter rail connection promises to lower the number of cars clogging Cambridge streets being used as a passageway between the suburbs and Boston.

“Secretary Pollack said that from a transportation planning point of view [it’s] very exciting. It’s the kind of project they like,” he said.

But the city was turned down two years ago for a federal Transportation Investment Generating Economic Recovery grant related to the Alewife bridge project, Farooq said – disappointing because the government often sends construction money after it grants design money.

“The sense we have, particularly from the state, is that Cambridge does not need as many resources to support our projects as other cities in the commonwealth do. And there’s some truth to that,” Farooq said, referring to the city’s relative riches as a center for innovation industries and real estate investors, which has helped generate a pot of free cash this fiscal year of $175.9 million, a jump of $15.4 million from the year before. “But for significant projects like this, it’s very difficult for the city to do it on its own.”

Money for the project, which Rossi said might cost about $25 million for a bridge and another $25 million for a commuter rail station, isn’t in the city’s long-range financial plans. Considering ongoing construction costs for three schools and the state being almost certain to come looking for funding to pay for overruns in its light rail green line extension plan to Somerville and Medford, budgets are looking tight, the city manager suggested.

State and federal lobbying efforts on the part of councillors could be helpful, Farooq said, and councillor Dennis Carlone argued that the impact of cars from state road system made “a great argument for commuter rail to take some of the burden away,” implying state and federal officials would see a rationale for providing funding.

But councillors Craig Kelley and Leland Cheung were fans of an air-rights sale.

“That’s the only way this will be built, with up to $50 million worth of project,” Kelley said. “I personally don’t see any way, no matter how many friends we make on Beacon Hill, that the T or anyone else [will give us] $25 million to $50 million.”

Cheung – whose policy order was the latest to prompt action on the bridge since its origins a decade ago – said his conversations with Alewife property owners suggested a platform was preferred to a bridge anyway. “It’s going to be a much better solution for us. It’ll be much better for us in terms of tying the area together,” he said.

The need for an at-grade crossing and commuter rail station was seen at least as far back as 2006 by Al Wilson of Wilson Cambridge Realty Trust, Mayor David Maher noted.

Solutions to the Triangle-Quadrangle split go even further back, to the Alewife Revitalization plan of 1979 sometimes called the “fish book” (an automatic download of a PDF is here) that imagined a solution remaking the neighborhood’s map a different way, solving the problem of railroad tracks with an earlier name:

“Alewife Boulevard would be the major new local artery – a four-lane street with a landscaped median. Most importantly, it would connect the Quadrangle and the Triangle across the Boston and Maine [railroad] tracks, thereby linking the Quadrangle areas directly to Route 2 via Ramp Street, and the Triangle parcels to Concord Avenue. The present intersection of Concord Avenue and Smith Place would also be improved to accommo­ date the new Boulevard.”

Rossi identified it as a mission for early next year to meet with the T “and get a sense from them of how real this can be,” but resisted thinking of it any more formally “until we really can determine what has to happen to make this all work.”

In 2005, Lesley University had hopes to expand its Porter Square campus in an 85-year lease of air rights over rail in Porter Square, but the plans collapsed amid the recession that arrived in 2008. The Massachusetts Bay Transit Authority considered a similar plan in 2011, with the help of Utile – a company now running Cambridge’s citywide development master plan process.