With Simmons at the helm, school officials reject ‘precedent’ of reconsidering test vote 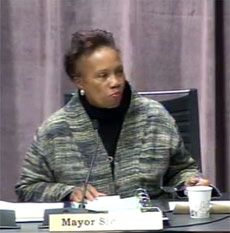 With Simmons at the helm, school officials reject ‘precedent’ of reconsidering test vote

The newly sworn-in School Committee had its first meeting Tuesday, opening with an equally new chairwoman in Mayor E. Denise Simmons and a light agenda. The group spent considerable time discussing issues related to student testing, with a motion to convene a “community discussion” in February and a last-minute motion by first-term member Emily Dexter to reverse a December vote to move to the PARCC standardized test this spring.

The community discussion motion was set aside for further development; Dexter’s motion failed, with no one voting to pass it.

Simmons immediately set a different tone in this inaugural meeting than previous term. Whereas David Maher, mayor and chairman of the committee for the past two years, had a relaxed style, sometimes massaging Robert’s Rules of Orders to allow further comments or even veer slightly off-topic, Simmons made it clear she plans to run a tight ship. Carefully having Fred Fantini move for “suspension of the rules” to allow her to make some opening comments, Simmons welcomed the group, saying it was “great to be back here at the School Committee” for the first time in six years, the last time she was mayor:

“I look forward to a term that is as productive and efficient as possible. I will endeavor to always start our meetings on time. If for any reason I am not here at the appointed hour, [vice chairman Fred Fantini] is advised to start the meeting. I think it says to the folks that we take our work seriously and we take their time seriously.”

She added that she will use Robert’s and committee rules vigilantly, including having public comments kept strictly to three minutes per person. To keep a “fair” and “robust discussion,” she said, she will make sure to circle through all members at the beginning and end of the discussions. “I know that this committee will always come prepared,” she added.

Returning to the formal meeting, and with no public comment, the group moved quickly through the six financial items on the agenda requiring a vote and a ratification of the four-year, $228,000 contract with incoming superintendent Kenneth Salim, which was passed in December but needed approval by the new committee.

A vote in the Dec. 15 meeting opting to move to the “Partnership for Assessment of Readiness for College and Careers” test this spring from MCAS continued to make waves. The 4-3 vote – with Maher, Fantini, Kathleen Kelly and past member Fran Cronin voting in favor – came after public comment by teachers and parents with all but one parent speaking against the change. Committee members and teachers’ union president Terry Gist had not been aware a switch was on the table until the committee agenda was sent Dec. 10. After public comment, member Patty Nolan gave her reasons for planning to vote against the switch, when Kelly moved immediately to a vote with no further discussion. Tuesday was the first business meeting since.

Fantini and Kelly put forth a motion this week to “have a community conversation about testing and assessment,” asking the superintendent to work with the committee to set a date in February. This echoes a 6-0 vote taken May 19 asking to delay statewide implementation of PARCC and to “proceed with a community-wide forum” in Cambridge. That forum did not happen because, members and administration have said, their attentions needed to be turned toward the superintendent search. Tuesday Kelly explained her new motion:

“I reflected after our last meeting on the fact that we had never had the community conversation regarding testing and assessment. That was very unfortunate, with the discussion that took place and the rush that everyone is feeling. I also was reflecting on the fact that with the superintendent search we had a lot of wonderful community conversations … When I start talking with teachers I realize that it is a much broader concern [than just MCAS and PARCC]: assessment and climate in classrooms. The other part is that I felt that there was a different kind of feel with public comment on Dec. 15 than I would like to see happen. Teachers have a lot to offer to us in terms of professional experience and their knowledge, and I would like to have more opportunity to ask teachers about their experiences in the classroom.”

Members all supported the idea of the community discussion, but several were concerned that the motion needed a better sense of structure and specific goals of the meeting. “The discussions around the superintendent search worked because there was a clear, defined goal with a beginning and an end,” first-term member Manikka Bowman said. “What would be the end goal here?”

Fantini said one goal would be to “inventory” current assessments “to determine where we can cut back,” and floated the idea of thinking about an “innovation school” that could use alternative assessments. Harding suggested a “world café” survey-style to collect people’s thoughts, but said, “this has to be a conversation that is very specific, or we will be caught spinning our wheels.”

With Simmons’ guidance, Fantini and Kelly opted to table the motion until the next meeting, when, as Fantini said, they hope “to come back with a more fleshed-out plan” after working with the superintendent.

A late order by Dexter furthered the testing dialogue. Saying she had received “a number of comments from constituents” about the Dec. 15 vote, Dexter handed out a written motion, read aloud by her and Simmons, asking the superintendent to alert the state Education Department that Cambridge would take the MCAS again in the spring. The motion lists eight reasons, including stress on students – particularly the four schools moving buildings – and the appeal from the educators’ union to not use the new test this spring; that only three schools opted to take the new test on the computer, reducing any advantages to practicing with its technology; and the fact that several communities took advantage of the offer to get an extension on the decision and have still not decided.

“As we said at the meeting in December,” Young said, “we considered the choices that were put before us and came forward with [that] recommendation for a number of reasons which we outlined.” Noting that “a couple of assumptions” in Dexter’s motion “are not precise,” he said, “we have to move forward, not backward.” Harding later picked up that comment, saying that “I do think that all eight bullets are not factual, something that the superintendent alluded to.”

Asked afterward about imprecise assumptions, Young said he was referring mainly to what he saw as Dexter’s suggestion that taking the test on computer was critical to his original decision. Although his December recommendation including experiencing technology among the four considerations, Young said it had a “relative lack of importance.” (It turns out that, given the option after the December vote, only three Cambridge schools will be taking the PARCC on the computer; the rest will use paper and pencil.) The primary reason for his decision, he said, was the “higher standards associated with the PARCC.” (With the possible exception of the technological emphasis, Cambridge Day fact-checking found no errors in the eight reasons in Dexter’s motion.)

Members debated again the merits of the test, but the crux of the committee’s decision lay elsewhere: with the propriety of voting to overturn a decision of a previous committee. Harding and Fantini said repeatedly it would be a “dangerous” precedent.

Bowman was more measured: “For me this is really respecting the process and the decision-making of body that made a vote. For good governance I think it’s really important to respect votes … To undermine that does not set the right example, regardless of the fact if I agree with it.” Referring to Nolan’s argument that the December vote was rushed, she added, “This feels thrown at us and not prepared as well.”

After each member, including student representative Ben Austin, commented, Simmons asked Dexter if she wanted to comment or wait “to be the last person to speak on this.” Dexter asked to wait, at which point Fantini asked for a vote: “I move for adoption. This is going to prevent us from working as a team and as a body. I think we ought to put this to rest now.”

Simmons asked Fantini if he would rescind his motion to vote to let Dexter make her comments. He refused, and a vote was taken.

Dexter and Nolan voted “present.” Kelly, Fantini, Bowman and Simmons voted against. Harding was out of the room for the vote and the last part of the discussion.

Fantini – guided by Simmons, who led him to suspend rules before making an off-agenda statement – made a cryptic “cautionary comment” late in the meeting about the danger of unintentionally violating the the open meeting law restricting private communication among members. Simmons agreed, and said with new members and a soon-to-be-new superintendent, there was value in reviewing some rules and standards.

Fantini asked immediately for adjournment, and Simmons again asked if he would rescind that motion to let Dexter speak on her motion. This time he did.

“I very much appreciate the generosity of everyone here for giving time to this,” she said. Noting that she was uncertain as a first-time member of protocol and “whether this was even a legal motion,” she acknowledged that she had presented the motion “awkwardly” but was very thankful for the “indulgence of the committee.”

Simmons thanked her for “raising important points” and acknowledged the committee for their “really clearly dedicated” discussion of the issues before adjourning the meeting.

Asked afterward about his reference to open meeting law, Fantini had no comment.