‘13 Hours’: Plenty of bad guys in Benghazi, but Hillary isn’t around in serious Bay flick 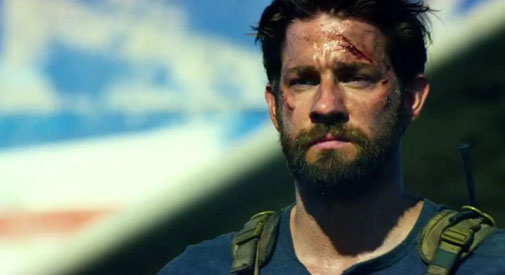 ‘13 Hours’: Plenty of bad guys in Benghazi, but Hillary isn’t around in serious Bay flick

Much will be made about the political ramifications of “13 Hours: The Secret Soldiers of Benghazi,” but Hillary Clinton is never mentioned. The movie does, however, cast an unflattering light upon the nameless U.S. officials monitoring from afar via drone while boots on the ground take fire from teeming insurgents amid insurmountable odds. Politics in this landscape are unavoidable, yet at the core, “13 Hours” is a tale of grit, courage under fire and the semper-fi brotherhood forged between a half-dozen men who draw paychecks from the CIA to keep unappreciative Ivy League-educated wonks safe in revolution-flipped Libya on the eleventh anniversary of 9/11. 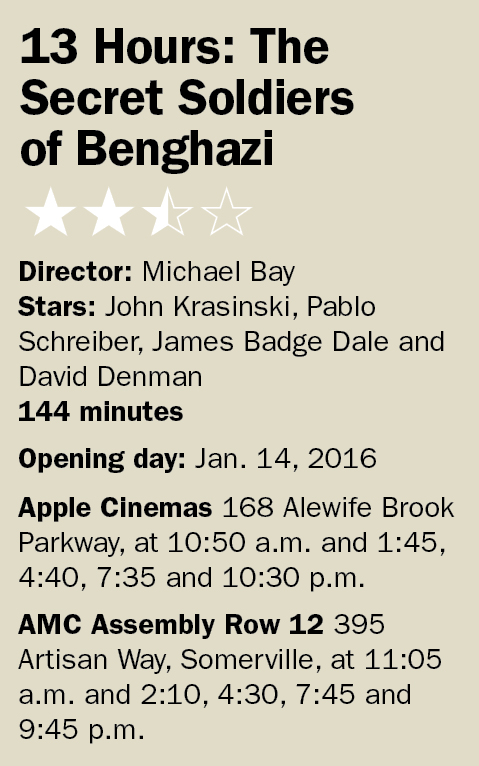 The memories of the siege of the U.S. Embassy in 2012 are painful, and the death of ambassador Chris Stevens still feels raw, but the film, adapted by Chuck Hogan (“The Town”) from Mitchell Zuckoff’s similarly titled book, casts a bigger net than what was captured in news clips and political spin at the time.

Near Stevens and his small entourage at a “diplomatic outpost” is a covert CIA annex – and most every Islamic terrorist from Tripoli to Benghazi seems to know about it. To get there we sit on the shoulder of Jack Silva (John Krasinski) a former Navy SEAL saying goodbye to his family and heading overseas for the inevitable shitshow. Right after Silva is picked up by his Global Response Staff lead, Tyrone “Rone” Woods (James Badge Dale), there’s a showdown with some heavily armed unfriendlies in a crowded alleyway. Bravado and bluster get them through, but these buff, bearded lads can back it up once the first trigger goes off.

Did I mention that this is a Michael Bay film? It comes with all the macho, drum-thumping trimmings you’d expect. Bay, the heavy hand behind the “Transformer” movies and “Armageddon,” has made claims of doing something different and real here, and to a degree it’s true – but it’s all relative. Bay turned the World War II into a schmaltzy comic book with “Pearl Harbor” but more recently dialed it down tight for the surprisingly edgy tale of the American Dream gone murderously awry in “Pain & Gain.” In that regard “13 Hours” is more the latter, casting shades of “Zero Dark Thirty” and “Black Hawk Down.” And while it’s not on par with either of those movies, it is more thought-provoking than the straight-up chest-pounding of “Lone Survivor,” the Taliban-hunting Peter Berg film from 2013.

The attack on the nation-building outpost run by the idealistic Stevens (played by Matt Letscher) lasted through the night and spilled over onto the CIA annex down the street, where 26 operatives sat in a bunker and the six-man GRS force had to hold off never-ending assault waves. The action scenes, often shot from drone and security cam POV that call to mind the big blazing “Scarface” finale, are deftly nerve-racking – and also, also at times, confused and muddled. The best is the pursuit of a SUV fleeing the diplomatic compound and trying to make it to the annex but going the wrong way, deeper into hostile territory. (Bay also pays homage to himself, recycling the ordinance-cam shot of a falling bomb from “Pearl Harbor” as if it were the Odessa Steps.)

Besides the terrorists, the baddies come in the form of Libyan police who drive spiffy Audi coupes and seem to be in the service of the militants; the faceless U.S. officials who don’t staff Stevens’ security adequately and then fail to pick up the phone when the shit hits the fan; and the CIA annex head (TV actor David Costabile) who threatens the GRS team regularly with termination for being unprofessional and delays them from aiding Stevens and his staff (at the end, the film notes he received a commendation for his service). The film does a yeoman job of laying out the complex series of events and the context and getting at the daunting disorientation of being a marked foreigner in a hostile land where the language barrier alone is enough to get you killed.

It’s a bit of a trip to see Krasinski from “The Office” go buff and mean, but it works. Pablo Schreiber of “Orange is the New Black” successfully trades duds and genres too and Dale, full of spit and swagger, should find more lead roles following “13 Hours.” What Bay and Hogan have done here is to sidestep the politics of naming names and, in honoring the heroics of six brave men, have subtly painted the politics of a changing global landscape and a government willing to put its own in harm’s way without the mettle to back them up.