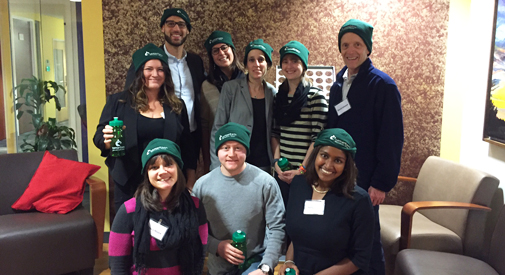 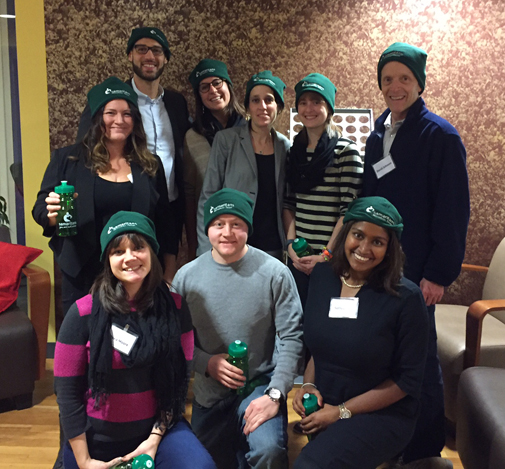 Some of the Samaritans suicide-prevention program Marathon team running in April. Three members are Cambridge residents.

The organization has a 13-member team that includes people from as far away as Eden Prairie, Minn., Texas and Los Angeles, and eight from throughout Massachusetts. Together they are trying to raise $130,000 – and, as of Saturday, had raised more than two-thirds overall. Each member has an individual goal contributing to that that figure.

The Cambridge runner with the farthest to go in his goal is Jeff Price, a program manager for the U.S. Air Force at Hanscom Air Force Base who hopes to raise $11,000. In addition to running for the Samaritans, Price is a weekly volunteer on its Statewide Helpline. His motivation is to prevent suicides among members of the military.

“Our military has seen a rise in suicide rates over the past several years. As a group, active-duty and military veterans take their life more frequently than the general population,” Price said. “Many airmen, Coast Guard, soldiers, sailors and Marines struggle with intense life experiences and professional stressors while serving our country that are extremely difficult to cope with. Working for the U.S. Air Force, I have unfortunately seen some who have lost this struggle.”

Sathya Silva, an Atlanta transplant, pilot and doctoral student in Aeronautics and Astronautics program at the Massachusetts Institute of Technology, has raised 58 percent of her $7,000 goal. She’s running in April, in her first full marathon, in memory of a best friend and flying partner. At the time of the marathon, he will have lost his fight with mental illness a year earlier.

(The high-pressure institute, which has suffered seven suicides in two years, has various student- and administration-run efforts underway to prevent self-harm.)

Michael Monestime has already raised 80 percent of his $7,500 goal in memory of Cambridge’s Christian Calderoni, who became a friend after Monestime launched a music marketing company in 1996, joining him on annual trips to Puerto Rico and tours with a local hip-hop group.

“He was one of those special people I always looked forward to hanging out with,” said Monestime, who moved to New York in 2003 to grow the business and, two years later, was “heartbroken” to hear Calderoni had killed himself.

“After moving back to Boston in 2011, I started running to help cope with my own depression,” Monestime said. He completed his first Boston Marathon in 2014 – and has since run two Ultra Marathons, each 50k. (Ray Neves, a Roslindale resident who grew up in Cambridge, is also running and fundraising in memory of Calderoni.)

The team’s fundraising page is here.