Future of historic Harvard Square kiosk gets slowed by step: A council committee 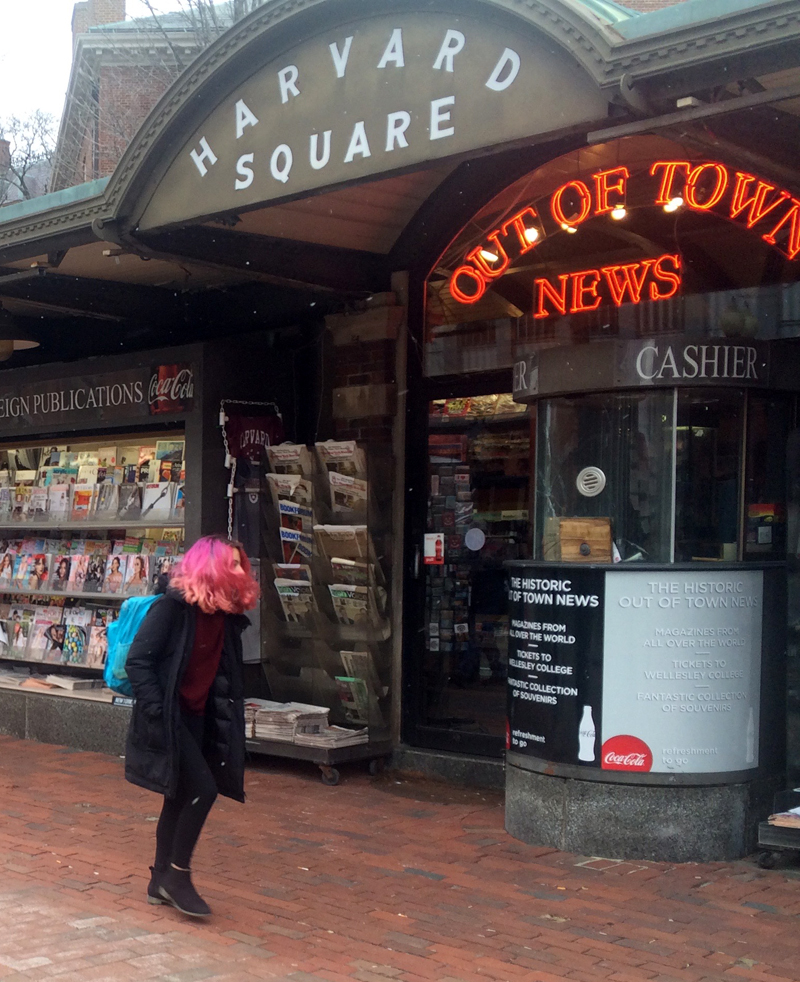 Future of historic Harvard Square kiosk gets slowed by step: A council committee

The Out of Town News kiosk in Harvard Square is city-owned will likely be remade with a more public role. (Photo: Marc Levy)

Another step has been added to deciding what happens to Harvard Square’s iconic Out of Town News kiosk, as city councillors voted Monday to discuss the project in their Neighborhood and Long Term Planning, Facilities, Arts and Celebrations Committee before the creation of a “working group” for the city-owned kiosk and surrounding plaza.

The council policy order aimed at figuring out the kiosk’s future also included a public/private partnership between the city and Harvard Square Business Association when it was introduced Feb. 29, but the order was put on hold by councillor Dennis Carlone. The version that passed when it returned Monday removes the business association.

The association will have to compete to partner with the city on operating and programming the kiosk, Carlone said.

“It will be a strong contender, and I understand why there’s interest in that – they’ve done great things,” Carlone said.

City Manager Richard C. Rossi stressed that the process would be open to all and not be limited to the business community or Harvard University, a major land owner in the square. “This has a long way to go before we would be saying ‘That’s the deal’ – there is no deal,” Rossi said, although the business association and university “might be the people we want to rely on to help keep the area clean, to help us with planning and programming.”

“Ultimately it is a City Council decision on how we repurpose and use the building,” Rossi said.

He did seem to advise against putting the council process first, though, asking that “we be allowed to move along as we were, and if we decide we need to have a more formalized group at some point, we will report that back to the council.”

On Feb. 29, it was primarily Carlone and councillor Nadeem Mazen who were disturbed by language in the policy order that seemed to set plans for the kiosk and plaza on an ordained course, starting with $600,000 in studies of the area set aside in the adopted budget for the current fiscal year and leading to a projected $2 million in construction costs in each of the next two fiscal years. On Monday they were joined by councillor Jan Devereux, who said she was excited about the project but put off by the language of the order and the “number of times the word ‘commerce’ was used without the word that goes with it: ‘community.’”

The business association “has done wonderful things, but doesn’t represent even the entire business community in Harvard Square and West Cambridge,” Devereux said, supporting resident concerns heard during public comment that “the working group have a broader composition and that we really think carefully about how it’s composed.”

Councillor Marc McGovern, a co-sponsor of the original order by David Maher with Leland Cheung and Mayor E. Denise Simmons, agreed that while many other parts of the city were the concern mainly of residents living nearby, Harvard Square was unique. “I don’t think people in North Cambridge feel a sense of ownership over Central Square necessarily,” McGovern said. “Harvard Square – everybody in the city feels a sense of ownership.”

That continues despite the criticisms of many that the square has lost some luster over the years, he said, noting that his own son has haunted the area in much the way he did as a kid – except that while McGovern went to The Tasty, his son goes to Tasty Burger.

Start before the study

Indeed, the square is “a vitally important part of the community,” Maher said, and despite what “conspiracy theorists in the community” may have feared, his motion was intended simply to energize discussion of plans for the kiosk after many years in which planning was overshadowed by other priorities. He has originally discussed the kiosk with the previous city manager, years ago.

“My intention was simply to light a little fire,” Maher said, “rather than wait for the engineering study to come out and then get started.”

Rossi agreed that the structure, which dates back to 1928 as a subway entrance and to 1984 – after a slight relocation – as a newsstand, is in dire need of work after years of neglect, but that work comes with some challenges: The structure is historic and cannot be altered, and will be refurbished with significant input from Charles Sullivan, executive director of the Cambridge Historical Commission. And it sits over the roof of the Harvard Square T stop, which makes adding technology and even plumbing “somewhat complicated.”

“We think of that area as belonging to all citizens … there should be a use for that building that appeals to everyone,” Rossi said. “We have no final plans, we have no final deals. We’d like to talk to people who’ve developed such properties around the country and have a sense of how we can use or repurpose  – that’s really was the direction the city was headed.”