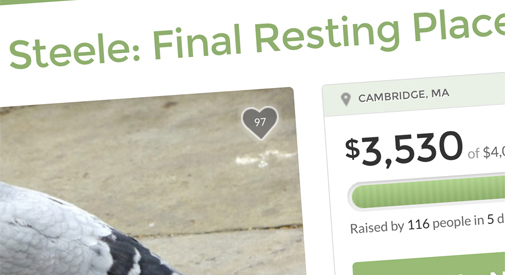 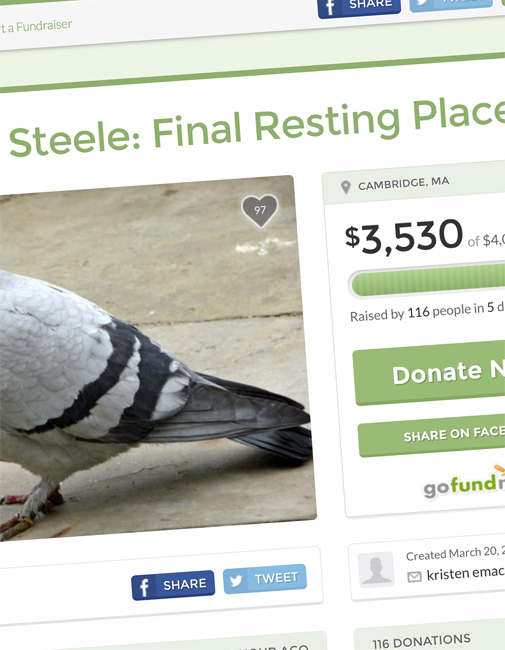 Click on the image above to see the Dorothy Steele: Final Resting Place crowdfunding page.

A crowdfunding campaign in honor of Dorothy Steele, the 77-year-old who died after a Feb. 28 hit-and-run incident, is near its goal of $4,000 needed to pay for cremation and cemetery fees.

Although the campaign is only five days old, 116 people had donated $3,530 by Friday, or 88 percent of what’s needed.

“One of the things about losing Dorothy that hurt the most was that I was afraid she would disappear from our lives without anyone really knowing,” said Kristen Emack, a photographer and friend of the wheelchair-bound Steele who said she’d helped the older woman with various tasks in recent months and even began work on a family tree. “The messages and anecdotes donors have been leaving [on the crowdfunding website] have helped me understand that our Dorothy had friends everywhere.”

Steele was living in an East Cambridge senior housing complex, from which she would go “wheeling around the neighborhood feeding the birds and squirrels” and take her breakfast in a hospital cafeteria, Emack said. She was gregarious and out at all hours even when it was cold – which is how she came to be out on Columbia Street at about 4:40 a.m., when Henry Park, 62, of Somerville, is said to have struck her with his sedan and left the scene. Police found the car from the incident March 3 and identified Park as their suspect while Steele lived out her last days in an intensive care unit. She died March 15.

A lifelong Cantabrigian, Steele was born and raised on Harvard Street, attending the Longfellow School and graduating from Cambridge Rindge and Latin School in 1956 (when it was called Cambridge High & Latin). She later lived on Amory Street. “This city was her home,” Emack said.

There is only one living relative: an 81-year-old brother on a fixed income who needs help ensuring “his dear sister can have her final resting place beside their parents,” said Emack, who started the crowdfunding campaign upon learning of his need.

Donations have ranged from $5 to $200 – an institutional gift from The Cambridge Homes senior and assisted living facility – and several people have taken the opportunity to share memories of Steele. “My dog Charlie and I enjoyed visiting with Dorothy many days in Inman Square,” donor Diane Griggs said, while another, Janet Randall, spoke of how she once would chat with Steele between runs at Fresh Pond after Steele would walk over from Central Square. At some point, Randall said, she realized she hadn’t seen Steele in a while.

“Just the other day, out of nowhere, I suddenly thought of her. And today, heard about this awful accident, and that she had been in a wheelchair,” Randall said. “I was honored to know Dorothy. She was an inspiration to me.”

The crowdfunding campaign can be found on GoFundMe.