‘Neighbors 2: Sorority Rising’ striking blow for equality, but one gross-out gag at a time 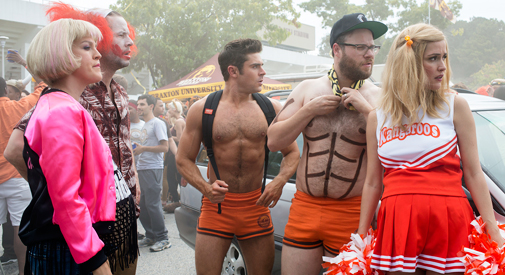 ‘Neighbors 2: Sorority Rising’ striking blow for equality, but one gross-out gag at a time

“Neighbors 2: Sorority Rising,” with its overwhelmingly good intentions, marks a shift in the Seth Rogen camp of filmmaking. Bro humor has been such a constant in comedies lately that I was genuinely gobsmacked by how positive and genuinely socially conscious the Rogen team is this time around. “Neighbors 2” might not achieve the comedic heights of its predecessor, but it demonstrates a remarkable ambition. Comedy sequels are tough and, “22 Jump Street” aside, few succeed. There’s too much risk in repeating jokes with diminished payoffs in the punchlines. Despite erratic direction and more simplistic gross-out humor than the first, the film succeeds mainly with its impressive cast and a storyline that will ring true with many. 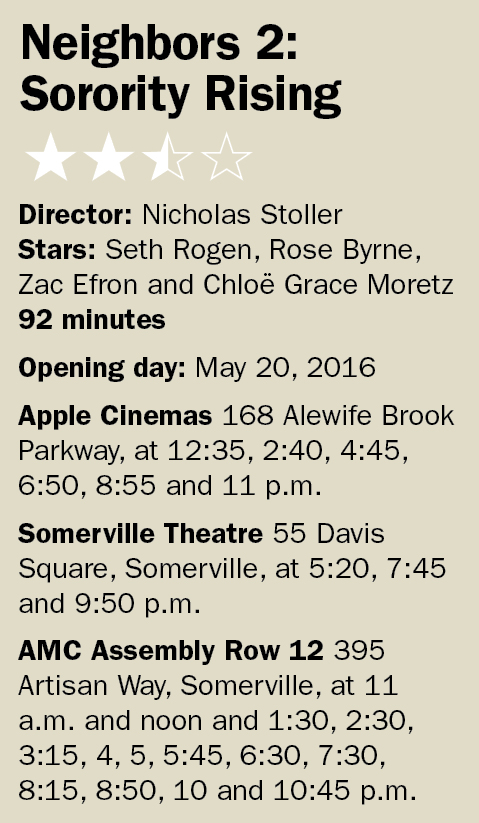 The pranks aren’t much different this time, but instead of a fraternity living next door, it’s a sorority led by Shelby (Chloë Grace Moretz), a first-year college student. Shelby and new friends Beth (Kiersey Clemons) and Nora (Beanie Feldstein) soon come to the absurd – and treated appropriately as such every time it is mentioned – realization that not only are sororities not allowed to host parties, but that the frat parties that can are typically hostile to girls. The result is that they create an independent sorority and rent a place where they can host their own parties – and once again a raging party house ends up right next door to Mac (Rogen) and Kelly (Rose Byrne), who have a second child on the way and are trying to sell. What ensues are pranks that escalate too quickly, an entertaining if distracting subplot with from frat guy Teddy (Zac Efron) trying to find his value in life and Mac and Kelly once again failing to find a way to compromise before everything dissolves into childish behavior.

Where the film separates itself is in a refreshing thread of progressiveness so rarely seen in comedies. The writing team don’t make the girls and their femininity the butt of the jokes. When men are called out for being sexist, they nod and listen. The female actors are allowed to be just as funny as the men. And the core of the film is about defining your own path, no matter what one life has already cleared off for you.

Moretz is serviceable, though almost immediately eclipsed by the combined charms of Feldstein and Clemons as her roommates – to the point one has to wonder what the film would have been like with either as the co-lead. Rogen and Byrne once again demonstrate a comfortable, comedic dynamic, even if the latter feels underused. It’s Efron who steals the film as the adrift, oblivious dreamboat who can’t seem to let go of his glory days in college. He plays Teddy’s love of his bros and dim sincerity for fantastic comedic effect. Future filmmakers, take note: Using Efron’s beauty as the punchline is the perfect use of his skill sets.

The film’s biggest flaw is its direction, which jumps from scene to scene with such varying tones that the first five minutes – when smash cuts reintroduce us to the characters – feels like a wildly different film than the montage not too much later of girls dancing blissfully. Director Nicholas Stoller’s direction is a patchwork that can’t handle the larger cast and shorter running time without feeling feeling a little weakly strung together.

“Neighbors 2: Sorority Rising” isn’t the best comedy you’ll see this year, and it’s certainly not single-handedly knocking down patriarchy in cinema, but the difference between it and other comedies is its obvious wish to try. It understands it can make jokes that are inclusive, don’t offend any underrepresented group and can still be funny, and that’s it’s biggest asset. There were laughs to be had and heartfelt moments, but it most importantly struck a note in how we should hope comedies continue.