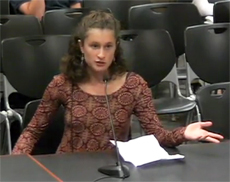 The student dress code for Cambridge Public Schools ran into new conflict as the School Committee held its summer meeting Tuesday, thinking the second reading of revisions on the code would be the final.

Language such as “clothing will be deemed inappropriate if it is disturbing to other students in any way” was eliminated, and more care has been taken to be gender-neutral. Still, there were concerns among some members, and the motion was ultimately tabled for still more discussion.

The issue of appropriate language for dress codes began at last summer’s committee meeting, when Cambridge Rindge and Latin School students expressed objections. While the committee was voting on the addition of the sentence, “students are permitted to dress in compliance with this dress code in a manner consistent with their gender identity,” a statement by CRLS student Charlotte Rosenblum was read into the record objecting to other parts. As read by fellow student Will McArthur, the objection was that the dress code was directed unfairly and solely at females, and arbitrarily enforced. The code “inappropriately sexualizes” women, Rosenblum said.

Principal Damon Smith was to discuss the code with students, an effort that continued throughout the past school year. The issue arose again in the June 7 committee meeting about revisions to the Rights and Responsibilities Handbook, which makes reference to the dress code and repeats some of the same language.

A revised code was presented to the committee this spring through the School Climate subcommittee and up for final approval this week.

Rosenblum spoke during public comment, saying she had heard that the dress code was on the agenda only the day before. “Most of what’s on this paper was written by me,” she said, referring to the revised policy. “I’ve been working on this issue for two years,” with much of the language sent in an email correspondence with Smith. She was obviously pleased with the results, with one exception – an addition that she had not seen until this week: “All students must be covered from mid-thigh to top of chest in non-see through material.”

“This restriction is not feasible for in terms of clothing for 14- to 18-year-old girls. Most skirts and shorts do not come to mid-thigh,” she said, noting that athletic shorts don’t begin to meet that requirement. “This one sentence is the only concrete thing that I think teachers will latch onto. I feel that it is insulting that this was added against what students have been asking for for the past two years and working so hard for.”

During committee discussion, vice chairman Fred Fantini said he was ready to strike the sentence in question and move to pass the remaining code. “The student voice has been heard on this. We’ve had ample time to negotiate this. Let’s put this to rest,” he said, suggesting that students and staff could revisit the policy in a year after seeing how it worked.

“I was the person who brought some of that language in,” she said, referring to her work as member of the School Climate subcommittee. “That language is not specific to women,” she said. “It includes men who sag their pants. The challenge is how to find language that creates an environment that allows people to express themselves as well as acknowledge that you are in an educational setting.”

As other members chimed in, Deputy Superintendent Carolyn Turk added that since learning about the dress code language the previous week, she has met with Smith, who was unable to be present at the committee meeting. “He and I are both very much committed to having that conversation, to take a closer look at that particular language,” she said, adding that Smith would contact Rosenblum later in the week.

Turk also clarified that, although the discussion has focused on the high school students, the dress code is districtwide.

The policy was tabled at the suggestion of Nolan and Fantini for further discussion.