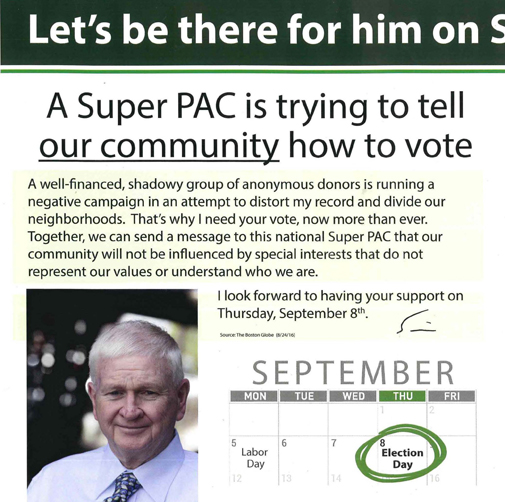 A mailer from the campaign to reelect Tim Toomey to the Legislature refers to a Super PAC and Boston Globe article, but evidence of each is elusive.

The Tim Toomey reelection campaign has made allegations in a mailer sent to voters of a “well-financed, shadowy group of anonymous donors” attacking Toomey, eventually citing Our Revolution, the movement springing from Bernie Sanders’ run for president, as the group.

The group “is running a negative campaign in an attempt to distort my record and divide our neighborhoods,” Toomey says in the mailers, which arrived in mailboxes Saturday – less than a week before the Democratic primary on Thursday.

Toomey has been serving for 24 years as state representative for the 26th Middlesex District, which includes Eastern portions of Somerville and Cambridge, and is also a Cambridge city councillor. His challenger is Mike Connolly, an activist and attorney who has been racking up a number of endorsements from organizations such as Progressive Massachusetts, Mass Alliance, Sierra Club and the National Organization for Women; from current and former Cambridge and Somerville elected officials Nadeem Mazen, Dennis Carlone, Jan Devereux and Minka vanBeuzekom, Patty Nolan, Emily Dexter and Lee Erica Palmer; and from academics Noam Chomsky and Lawrence Lessig.

“That’s why I need your vote, now more than ever,” Toomey says in the mailer. “Together, we can send a message to this national Super PAC that our community will not be influenced by special interests that do not represent our values or understand who we are.”

The mailer points to an article in The Boston Globe, apparently as a source for the charges of a political action committee taking action to sway the election, but a search of the Globe archives online shows no article on that day – or at all – about the race between Toomey and Connolly or about Toomey and a Super PAC. Toomey campaign manager Jefferson Smith was contacted by phone Monday but declined to speak on the record, asking instead for an email detailing questions; an email sent immediately afterward seeking more information about the Super PAC and a link to the Globe article has gone unanswered. A final voice mail left just before publication of this article got no response.

Smith was also offered the chance to contribute information and comment to this article after publication, and that it would be updated to reflect what the Toomey campaign had to say.

The Connolly campaign said it too contacted the Toomey campaign for more information, but two days later still has heard nothing back.

Update on Sept. 5, 2016: A blog post that went live late Monday on Toomey’s campaign website pointed a finger at Our Revolution, which has endorsed Connolly as well as state Sen. Pat Jehlen. The Aug. 24 article, which comes via The New York Times, says “backers of Sanders, whose condemnation of the campaign finance system was a pillar of his presidential bid, [worries] that the group can draw from the same pool of ‘dark money’ that Sanders condemned for lacking transparency.”

One cause for confusion in Toomey’s mailing: Our Revolution is not a Super PAC, but another kind of organization known as a 501(c)(4) that gives rise to similar complaints about spending and involvement in political campaigns. As the Toomey blog says:

In recent days, someone has begun flooding Somerville and Cambridge neighborhoods with unattributed campaign mailings on behalf of Mike Connolly that contain no return address and no “paid for” disclaimer. Much of the mail is negative and contains distortions of my record as a state representative … These mailings only started to appear after pre-primary campaign finance reports were due.

Chris Addis, campaign manager for Connolly, issued a press release responding to the Toomey mailing, but before the Toomey campaign specified its complaints.

Chris Faraone, news editor of the alternative newspaper DigBoston, which has endorsed Connolly, wrote Monday on Facebook that “Instead of working hard and campaigning over the long weekend, Mike’s opponent Toomey sent out a deliberately false mailer … The liars even cite a nonexistent Boston Globe article, a tactic that you’d hope would propel the paper to back Mike in the final stretch. It’s all infuriating, but expected for Toomey.”

This is the second time Connolly has run against Toomey for the state representative seat. Four years ago, he drew a quarter of the votes in a race in which he accepted in-kind donations of goods and work, but no money – even running as Mike “No Money” Connolly. Toomey took 68 percent of the vote and Somerville Republican Thomas Vasconcelos took 6 percent.

In that campaign, Toomey ran a forceful defense of his seat. Among the more prosaic back-and-forth of policy discussion among candidates, Toomey criticized Connolly’s employment by Hewlett-Packard’s Autonomy division, which Toomey felt was morally suspect because it had been a vendor for oil companies and Halliburton and provided eavesdropping and email-monitoring products to government. “You chose to work for this company … That would not be a company I could ever work for,” Toomey said.

Connolly, noting that Hewlett-Packard employed 300,000 people around the world in a variety of divisions – and that his own work involved nothing more controversial than a tool allowing lawyers to search documents quickly – called Toomey’s charge an attempt at “distraction.”

The Republican candidate in the debate, Vasconcelos, dove in, calling Toomey a hypocrite: “This whole spiel, ‘How dare you work for this company,’ when our government does far worse,” he said to Toomey. “You yourself are part of a system, this bureaucratic machine that hurts so many people around the world and your own citizens.”

Connolly said Saturday that he wanted answers about the mailer that arrived that day, but also to get back to talking to voters about substantive local issues.

“I am disappointed by these falsehoods. I think this is precisely the kind of tactic that makes people distrust their elected leaders, and that’s unfortunate in a local race like this,” Connolly said. “With all that is going on nationally, we ought to set a more positive example here in Cambridge and Somerville. I want to correct the record, but mostly I want to continue making the case for why I hope to serve our community.”