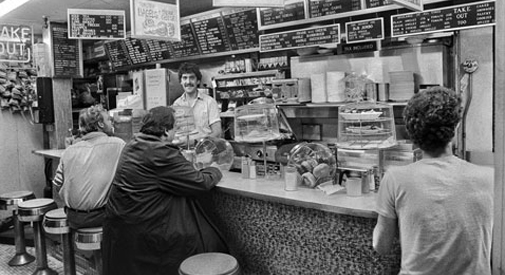 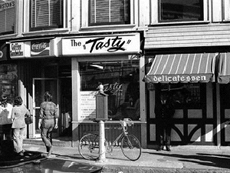 From Gus Rancatore and Merry White, Sept. 8, 2016: Stuck in the back row of Sullivan Chamber at City Hall on Thursday evening, hearing gigantic developer Equity One talk of its 112 properties and its local architects and advocates talk of the glories that will be their 113th – the “it’s not a mall” Harvard Collection, featuring national and international brands – after it takes over, remodels and adds a faceless façade to three historical buildings in Harvard Square, we thought of a better collection to be housed in their “restoration.”

Let’s simply restore the real Harvard Square, which so many of miss. Let’s fill its shiny glass structure and penthouse with lost and lamented businesses that will really please alumnae and Brattle Street’s affluent liberals!

The food court alone will bring tears to the eyes of former residents: Elsie’s, St. Clair’s, The Tasty, The Window Shop, Underdog, Buddy’s Sirloin Pit, ZumZum, the Wursthaus with its picture of Henry Kissinger and, for the tipplers, Cronin’s and its pulchritudinous hostess, Kitty.  We’d never thought so, but we already miss the recently departed Pizzeria Uno.

And for the bohemian crowd: Tulla’s, the Café Mozart, Mandrake’s and Mrs. Tutin’s Starr Bookshop. More books? The 24-hour Paperback Booksmith. Musical memories can be found in the Minute Man Record Shop, its little booths filled with high schoolers swooning to LPs, and Jonathan Swift’s. Club 47 can bring back Joan

Now there’s a mall worth restoring. (For the record, these developers do plan to keep the Dewey, Cheetham & Howe sign. Although some might suspect a lack of irony in its preservation.)

They kept saying “we are custodians” or “caretakers” of the legacy of Harvard Square, but does that mean Pratesi sheets and Kate Spade? Cambridge is not North Miami.