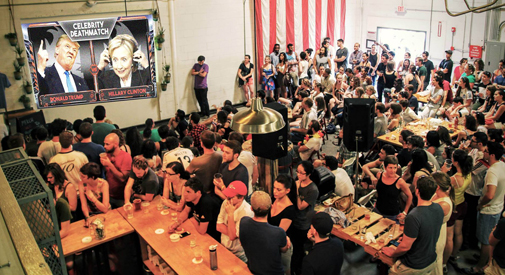 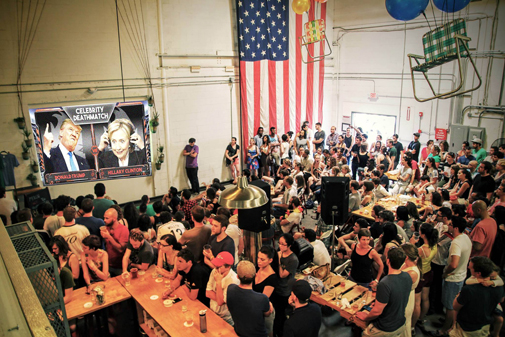 Crowds take in the first presidential debate Sept. 26 at Aeronaut in Somerville. Another watch part is scheduled for Sunday. (Photo: Aeronaut Brewing)

The second presidential debate arrives Sunday with some not-very-juicy disclosures about Democrat Hillary Clinton’s corporate speeches, courtesy of Wikileaks and Buzzfeed, and the sleaziest of revelations about Donald Trump’s guy talk, in which the Republican talks about how he makes unwanted advances toward women (“I just start kissing them … I don’t even wait” and “Grab them by the pussy,” as The Washington Post reported) and how he gets away with it (“When you’re a star, they let you do it”).

That, more so than a town hall-style format that allows direct questioning of the candidates by supposedly undecided voters (really? come on) in the audience, is sure to liven up the debate running from 9 to 10:30 p.m. Sunday, but two local breweries are leaving nothing to chance.

Aeronaut Brewing, 14 Tyler St., near Union Square, Somerville, hosts its second #Aerodebate event from 7 to 11 p.m. Sunday. “Our first debate-watching party in the taproom was wild beyond any of our expectations,” managers said on Facebook, describing the scene as having “a raucous-yet-focused crowd, three massive screens, loads of snarky tweets broadcast on our giant tweetscreen, debate bingo, and free swag giveaways.” (The snarkiest tweets of the night and winning bingo cards earn prizes.) Interested? Bring laptops or smartphones, or both, and show up early – seats are first-come, first-served and filled almost immediately last time, Aeronaut says.

The debate will also be showing at Bukowski Tavern, 1281 Cambridge St., Inman Square, with custom appetizers called The Trump (small buffalo chicken fingers – get it? – with maple dust and ranch dressing) and the Clinton (an onion ring tower with a “private server” of sauces); and at Brass Union, 70 Union Square, Somerville, where a 70-inch television and cocktails created for the election season drew great crowds in September, a worker said, and likely will again Sunday.

Know of other debate-watching parties? Leave them in the comments.