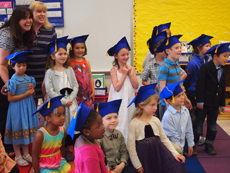 A state law mandates lead contamination testing for all children under 4 and requires evidence of testing for kids entering kindergarten. These kids graduated Peabody School kindergarten in 2013. (Photo: Nesson Marshall)

Cambridge health officials want to get more kids tested for lead, but have no authority to enforce a state law that mandates testing for all children under 4 and requires evidence of  testing for kids entering kindergarten, according to a statement issued Thursday by the city’s Public Health Department.

The department released the statement after Cambridge Day reported that about 20 percent of Cambridge children under 4 aren’t getting the required tests. A reporter had asked about the testing gaps in April.

The city’s lead testing performance beats the statewide average by a few percentage points – last year, 80 percent in Cambridge versus 76 percent statewide – but the health department “would like for the [Cambridge] screening rate to be higher,” the statement said.

To this end, the city intends to participate in an effort to raise testing levels statewide, the statement said. According to the Cambridge officials, the state Department of Public Health intends to add lead testing requirements for kids going into licensed daycare or pre-school programs, in addition to kindergarten. The state will also mail lead testing “report cards” to all pediatricians informing them of the testing mandates and disclosing testing performance in their communities. The state is also “creating other educational materials for medical providers and families that will emphasize the importance of screening,” according to Cambridge.

“The Cambridge Health Department intends to work with the state to promote this program locally,” the statement said.

Again according to the city, state health officials already “reach out to pediatricians and the local board of health” in any community that “has a low rate of screening or is a high risk for lead poisoning.”

Omar Cabrera, a spokesman for the state agency, did not respond to questions about the issue last month and again Thursday.

Lead can cause lifelong deficits in thinking, behavior and academic performance, and scientists say there is no safe blood level for children. Early screening is important to alert parents, doctors and community officials to prevent further exposure to lead, by taking actions such as testing homes and surrounding soil for lead paint; having children wash their hands before eating; and feeding kids foods high in calcium and iron.

Lead contamination of drinking water has been in the news recently since scientists and residents of Flint, Mich., discovered extraordinarily high lead levels in city water caused by a decision to switch to cheaper water from the Flint River. Cambridge has its own reservoir water treatment, but drought conditions and low rainfall has caused the city to start buying and introducing Massachusetts Water Resources Authority into Cambridge’s system starting Tuesday, with $3.6 million quarterly requests for funding from the City Council. The drought is predicted to end in the fall of 2017.

The city’s statement said lead-testing figures for kids in Cambridge and other communities might have underestimated performance because children who hadn’t received all required tests in one year – and so were not counted as having been tested – might have gotten their final test the next year, when they would be counted. The city’s level has varied between 73 percent and 86 percent from 2010 to late 2015.

The state law requiring children to present evidence of lead testing before entering kindergarten doesn’t exclude them from school if they don’t meet the standard and has no other enforcement mechanism, the city said. The School Health Program doesn’t keep statistics on the number of incoming kindergarteners who don’t show that they’ve been tested, but school nurses “follow up” with some kids who have not received tests.

Next up in regulation

The state’s proposed changes in lead testing regulations don’t include new enforcement measures relating to school or preschool entrance, according to the proposal posted on the state health department website. As the rules are written, it’s doctors, clinics and “health maintenance organizations” that must test children under 6 at required intervals.

The new regulations do require followup testing and other services for children who exceed the latest “level of concern” of 5 micrograms of lead per deciliter of blood, or 50 parts per billion.

The city runs a lead poisoning prevention program that helps families in Cambridge and 33 other communities, the city’s statement said. It mostly serves kids referred by a doctor or the state’s Childhood Lead Poisoning Prevention Program, but also responds to questions from other families, the city said. Health department workers also speak about lead poisoning prevention at community events and in programs targeted to immigrants and homeless families.