With policy to get more kids into sports, School Committee returns to business 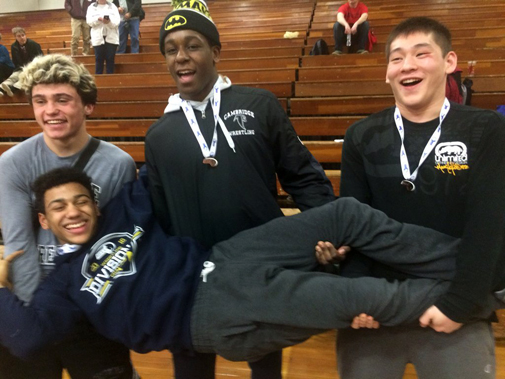 With policy to get more kids into sports, School Committee returns to business

The committee had a harmonious and fairly in-depth discussion about the content of a policy motion – their first in some time. A motion by vice chairman Fred Fantini and member Richard Harding to adopt a “non-cut policy for freshman sports” passed, with a revision to direct the superintendent to “explore” rather than “explain” how to implement the change.

“This is not going to be easy, and we do understand that,” said Harding, referring to scheduling time and play space, as well as handling potential coach resistance and ensuring kids don’t stay on the bench. “This is aimed at scholars who want to be athletic. This is an important time [in their lives] to encourage kids to be part of athletic activity.”

The motion came in part out of public comments on the difficulty some Cambridge kids have getting access to organized sports of any kind – competitive or intramural – at Cambridge Rindge and Latin high school, particularly in light of steadily increasing ninth-grade enrollment.  “I don’t see any indication that people are planning for the significant CRLS enrollment growth,” parent Jennifer Kay Goodman said. “The story in Cambridge is that in many sports you have to be playing since you were a little kid to be competitive enough to even try out, or … that kids sit on the bench the entire game.”

For 20 minutes, members discussed the importance of activity, of being involved in groups in school and of having access to games and team sports; the relative benefits of being accepted or sitting on the bench or even being cut by competitive teams; some personal history of involvement in athletics; the logistics of serving all students in a community with limited playing fields and courts; the roles of partner organizations and student input in changing the policy and the possible financial implications of expanding freshman sports.

“I really appreciate this motion. It is very responsive to feedback we’ve gotten from families,” member Emily Dexter said after other members’ considerable input, while pointing to other priorities. “It troubles me that we are spending this much time talking about after-school sports. I wish we were spending this much time on the curricular challenges of this overcrowding. The main mission of CRLS is academic.”

Dexter joined others in passing the motion to explore the option.

The non-cut policy was one of the few policy motions the committee members have discussed in depth this calendar year. In January, they considered school testing and agreed to create “world cafés” with parents and staff. In May, they passed a motion encouraging an elementary school world language program and asking for a report from new Superintendent Kenneth Salim by December. But much of the other policy motions on the agenda since January have been referred to Budget or Ad Hoc Transition subcommittees or to a summer retreat for “deeper discussion.” The Budget Subcommittee meetings have not started, and at the summer retreat, there was no discussion on the issues, which were instead kicked farther down the road to the Ad Hoc Transition Subcommittee for “prioritizing” for Salim while he undertakes a six-month “Learning-Based Entry Plan.”

The transition subcommittee run by Manikka Bowman met Sept. 22, and the result was a motion on Tuesday’s agenda reassigning yet again many of the issues to other subcommittees: a four-month-old motion to formalize connections between committee members and individual schools is referred to the Community Relations Subcommittee; a June proposal to review class sizes goes to the Budget Subcommittee; achievement gap and staff diversity issues, also from June, are referred to a new Goal-Setting Subcommittee, and so on. This motion to reassign eight issues raised over the past several months was passed unanimously with little comment.

The Goal-Setting Subcommittee – whose creation was assigned to Fantini during the summer retreat – was established through a motion Tuesday. Member Patty Nolan asked for a critical change, though: to have it be a “subcommittee of the whole,” instead of a subcommittee proposed by Fantini to be made up of Nolan, member Kathleen Kelly and himself. Nolan later cited the importance of the entire committee to be “involved in this critically important work,” and for all stakeholders to have opportunity for input. Fantini, Kelly and Nolan will instead be “co-chairs,” in a move that drew some skepticism from Mayor E. Denise Simmons. “This is a little bitty committee,” she said, adding about the three-way leadership, “you are more daring than I.” The revised motion passed unanimously.

The committee also passed a related motion by Dexter to add six additional issues raised at the summer retreat to the Goal-Setting Subcommittee’s plate, including expanding pre-kindergarten programming and fully integrating special and general education programs.

It passed unanimously, but only after Simmons asked for a formal “second” to move the motion forward for discussion – and Harding refused. Simmons, Bowman and Harding spent considerable time discussing what role if any Bowman’s subcommittee should have in Dexter’s list of issues, with Simmons even wondering with frustration, “Where should these issues go?” She refused to allow Dexter to clarify that her motion was explicitly about the Goals-Setting Subcommittee, saying, “Ms. Dexter, Please allow your other colleagues to speak to it.”

A $1.6 million deficit in the current budget from growing costs of out-of-district special education has been narrowed to $561,000 with the finalization of “circuit breaker” state funds to partially reimburse districts, reflected in an additional $215,000 out-of-district expenditure passed Tuesday. The reimbursements were revised upward by about $100,000 for last year’s budget and finalized at $4.3 million for this year, which comes in about $210,000 higher than last year’s total.

The district faces similar shortfalls each year because of the widely fluctuating need and costs for out-of-district tuitions, which have seemed difficult to accurately predict for Assistant Superintendent for Student Services Victoria Greer and her predecessors.

“We are paying close attention to [the deficit] and hope to close it,” Salim assured. Previously, end-of-the year savings and unused funds have filled the gap, partly due to conservative estimates by the district’s chief financial officer, Claire Spinner.

Budget Subcommittee co-chairman Harding said he and co-chairwoman Kelly have met with administration staff on the issue already and are anticipating more budget meetings this year than usual to focus on this and “other major programmatic budget implications.” He was not specific about what those were, but they likely include his motion for expanded freshman sports opportunities.

Although not on the agenda, a recent report from Salim – answering a request for an overview of an upper school math initiative – drew comment from Nolan.

Part of the Innovation Agenda included developing an accelerated math program with the goal of dramatically increasing how many eighth-graders complete Algebra I. The report has not been made public, but Nolan reported that it revealed “a complete lack of progress in students completing Algebra I in eighth grade. [The rate] is still 15 percent, the exact same as it was six years ago” at its inception. In Brookline public schools, she said, the goal for eighth-graders is at 100 percent completion.

Harding and Kelly chimed in with deep concern. “I don’t want this to be a negative conversation,” Harding said, “but there is an urgency with which we have to recalibrate the upper school math program.” He noted with alarm that at one upper school, only one student passed the advanced algebra test.

“I also feel the clarion call,” Kelly said. “We have never had enough support put into the system for the on-grade level or below-grade level math students. Until we are willing to put in significant resources for each tier of the sixth-through-eighth math program,” she said, there will be no progress. “This will become a budget concern in this budget.”

Even in a routine first-reading vote of five revisions to student policies, Fantini saw broader implications for curricula, scheduling and possibly even budget. He asked the school’s legal counsel, Maureen MacFarlane, to summarize the changes. The revisions of policies regarding physical exams and other student health screening, substance abuse and sex education, communicable disease and health education policies were made to better reflect current practice but also to align the district with new state regulations, she said.

Fantini said he pulled the motions for discussion to highlight the growing requirements for broad health education across the grades, and for the administration to consider “the policy implications and how we will respond.” He cited the requirement for ninth-graders to take a gym and health class as one of two electives if they are not in school sports as evidence of the impact these seemingly little policy changes can make.

With a growing focus on health curriculum in grades six through 12, Dexter noted, perhaps there needs to be a shift to looking for warning signs of depression or anxiety, and at an earlier age. “I don’t think kids start smoking cigarettes or drinking alcohol because they don’t have enough information,” she said. “They do it for other reasons.”

Thirteen parents spoke at public comment, with several emphasizing their support for the committee asking in May for elementary world language rollout to begin in the 2017-18 school year. They stressed they were “looking forward” to a report on implementation requested by the committee and due from Salim in December.

There were also comments asking for improved special education services, particularly focused on integration of general and special education; repeated concerns about whether there is sufficient response to increased enrollment at CRLS; and pleas for urgency in expanding pre-kindergarten opportunities, with emphasis on the cost to families who are shut out of city pre-kindergarten through the chance of a child’s birthday being after April. (Only children born before March 31 are eligible for pre-kindergarten in Cambridge.)

In other business, Simmons passed over without comment a motion she proposed Sept. 6 to “convene a preliminary discussion on how members are to be identified, addressed and recorded for public record.” The motion remains on the agenda.

The committee also passed a $52,000 one-year contract extension to the Cambridge Economic Opportunity Committee to continue teaching the fifth grade “Know Your Body” curriculum. This contract was slated for cancellation last year, but was saved by the committee in part because members felt the organization deserved more warning. With a new superintendent, it has been given a one-year extension. “If it’s the decision that we don’t move forward with CEOC going forward,” Harding told Salim, “I ask that you give them good notice. They are a longstanding partner of over 30 years.”

In addition to the student policy revisions and the special education recommendations, the committee also passed unanimously and without comment contracts for the $327,000 purchase of one electric school bus for a pilot program and $75,000 for Apple computer hardware; and acceptance of a $129,000 grant to supplement English Language Learner education, a $464,000 grant for the Rindge School of Technical Arts and $2,100 in miscellaneous gifts. Also passed was a motion by Simmons to enter into contract negotiations with committee executive secretary Judy Martin for a contract extension, with sharp words from Simmons that her contract was allowed to expire in an “oversight.”

This post was updated Oct. 28, 2016, to make it clear that the Cambridge Economic Opportunity Committee has received its only one-year extension.