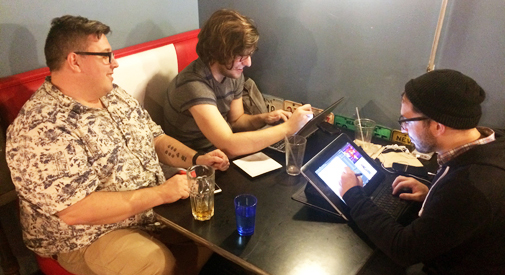 Two-day Massachusetts Independent Comics Expo is this weekend, but there’s always a mass of creators in Cambridge, Somerville
By Marc Levy 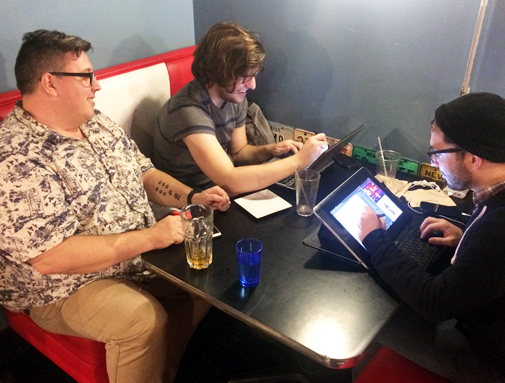 People are coming from as far as Los Angeles, Seattle and France for this weekend’s Massachusetts Independent Comics Expo, but for some local comics professionals the gathering never ends.

In addition to the Comics Roundtable that meets weekly at Cambridge’s Main Library, artists and writers gather regularly at each other’s homes and crowd around tables at select places throughout Somerville, creating impromptu bullpens reminiscent of the smoke-filled apartments crammed with drafting tables in the early days of the industry. These days, the artists are more likely to be working digitally, sketching, refining and mixing sophisticated color palettes on Cintiq tablets, but that they have a chance to gather at all is a virtually unique and unquestionably special quirk of geography.

“There are a lot of comics people in Georgia, for instance, but Georgia isn’t laid out like New England, and it’s not laid out like Boston or Somerville. Things are very far apart there,” said Joe Quinones, an artist who pops into Davis Square’s Diesel Café almost daily to work on his comics pages – including his just-finished run on Marvel’s “Howard the Duck” – or a variety of other projects. In contrast, his buddy Adam Hughes “might live near this other artist there, and they’re near in relation, but they’re 45 minutes away from each other. They’re not going to hang out every day. Maybe they’ll do dinner once every couple of weeks.”

Quinones, though, is often seated with artist and writer Ming Doyle (“Constantine: The Hellblazer”), Jordan Gibson, his colorist on “Howard,” and writer Kevin Church (“Adventure Time” and “Regular Show”). On any given day Raúl Gonzalez (“Lowriders in Space”) might come through with his kid for a coffee and Sarah Kaiser will be draped across a padded bench working on her Web comic, “Eagle Ordinary.” There are rare spottings of Liz Prince, author of the graphic memoir “Tomboy,” and Maris Wicks, whose marine biology background led her not only to science-based comics, but some “SpongeBob Squarepants” as well. Zachary Clemente, who helps run the Mice conference, maintains a blog about comics culture, and Tim Finn doesn’t just publish minicomics, consult on “G.I. Joe” and “Transformer” box sets and teach animation and graphic storytelling at Lesley University – where Mice has taken place since its co-founding by Dan Mazur, a Cambridge cartoonist who also works with the roundtable – but owns and runs Hub Comics near Somerville’s Union Square, where Diesel’s sister cafe, Bloc 11, attracts its own group of comics professionals and avid amateurs.

Exactly how many people in Cambridge and Somerville are making comics regularly or professionally?

“Maybe it’s hundreds,” Quinones said. Certainly there are more around and popping up than any one person can know. “I was with Ming on our way to the Boston Comic Con and stopped at Bloc to get get breakfast on the way and there was this girl working on a Cintiq. We could tell she was working on comics, and we were peeking over to see what she was doing. We should have said hello.”

Felisia Sainz, who coordinates the art exhibits at Diesel, Bloc 11 and the third cafe in the chain, Forge – which, with its strong light and smaller crowds, also pulls in artists – said she has been inspired to renew efforts on her own artwork. “I kind of put my art career and all the comics stuff I wanted to do on the back burner and was like, ‘Okay, this isn’t necessarily going to happen. Maybe I’ll just get a regular 9 to 5 job after a transitory period at a cafe.’ But meeting these people reinvigorated me,” Sainz said. “Seeing Joe every day, seeing Ming every day, even just looking at their Instagrams and knowing they’re working on stuff within our little home, it’s like, ‘Why am I not doing things?’”

During the summer, Diesel and Bloc 11 had concurrent comic art shows – with the Davis Square show more focused on the superhero world of Marvel and DC illustrators and the Union Square show more focused on indy comics, in essence co-curated by Clemente. At his suggestion, Sainz included K.L. Ricks, an artist often working in horror and sci-fi with whom he’d collaborated on the book “Remnants,” whose experience casts an interesting perspective on the local scene. 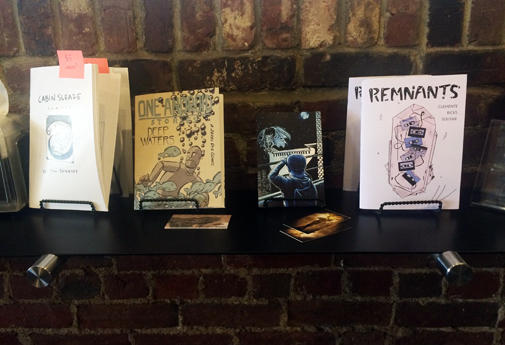 Bloc 11, in Somerville’s Union Square, hosted a summer exhibit focused on independent comics, with “Remnants” by Zachary Clemente and K.L. Ricks at the right.

Like Quinones and others in the Cambridge and Somerville comics scene, Ricks is a graduate of the Rhode Island School of Design. But while Quinones spent a year afterward in rural Maine going crazy from the isolation before moving to Somerville, she lived for a year in Boston and opted to move away to the quiet of Worcester County. “I like having control over my privacy,” she said. Stuck in Maine after graduation in 2003, Quinones built community early on via websites such as Fisticuffs and Project: Rooftop, where people submitted designs for friendly critiques – it’s where he first encountered Doyle, who lived in Boston’s Back Bay. Living outside Worcester, the younger Ricks still finds the Internet crucial in linking her with other artists. “Remnants” happened only because Clemente saw her work on Twitter and asked to collaborate, she said, and these days that sort of thing “happens all the time.”

She’s looking forward to attending this year’s Mice – it’ll be her first since the conference began in 2010 – and, at least, briefly, diving back into the kind artistic populace she knew from college.

“Just because RISD’s there, Providence has a really indy-centric comics scene. Boston is distinct in that it’s so Marvel- and DC-centric, and you don’t really see that high density in other communities. It’s very interesting to see how that works, especially to see those people interact with the indy people and how they influence each other,” Ricks said. 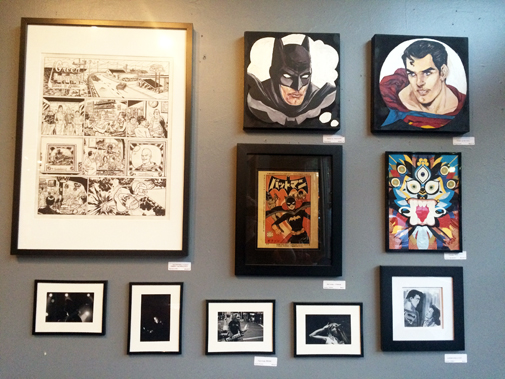 Some of the comic art on display this summer at Diesel in Somerville’s Davis Square, all by illustrators who gather there.

“Cartoonists are, sort of stereotypically but also in reality, even if they don’t mean to be, sort of hermitic. But just being able to walk somewhere as opposed to driving to have leaving the house to see people is a big plus,” Ricks said. “I’ll email stuff back and forth and ask other artists their opinion, but any time I get to do it in person, I jump at the chance.”

Art students will typically be part of a group studio, where they’re constantly hanging out and looking at other people’s work and having those people comment back, perfect for feedback and networking and not a little competitive. Leaving college means losing that enforced environment, and at the Massachusetts College of Art and Design, teachers even warned Sainz that illustration was going to be a solitary, alienating thing. “You will be alone,” she said, recalling the lessons she absorbed from as recently as 2010. “You will be competing with every single member of your class and this is going to be you in your studio and it’s not going to be fun anymore, it’s going to be work.”

But what she learned from working at Diesel – she spotted Quinones, Gibson and Doyle on her first day at work, running dishes back and forth, but it took her a while to realize the same Joe Quinones she followed on Instagram was the one in her cafe – was that there was no reason that dynamic had to end.

Doyle moved to Somerville from Boston with her husband Neil Cicierega, an Internet artist and animator (as well as filmmaker, comedian, actor, puppeteer, singer and musician), and Sainz relocated within the city as well. They all wound up on the same block, with Sainz assuring Quinones, “I promise that I didn’t do this on purpose.” The proximity makes it easy to have a late night gathered around a terrible movie, everyone working away on their laptop or drawing board.

“It’s just the dynamic of comics that you work all the time. It’s not like a 9-to-5 where you punch in and out, and it’s easy to just let it kind of take over your day and have it be the only thing you do. I feel like on most days I’m putting in 12 hours at least drawing, and it can get pretty monotonous and it can get boring, especially if I’m just chained to my desk,” Quinones said. 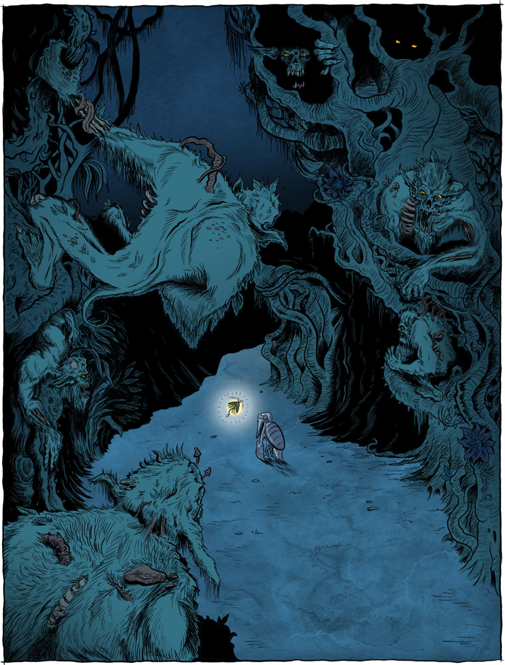 “The Tales of Reverie” is the work of Gregery Miller, who recently moved to Somerville from Brooklyn.

That’s where an artists’ group chat can come in handy – if people are interested, Quinones can head to Diesel and work for a couple of hours, keeping an eye open for a booth. This kind of meetup is possible in only a few places, including New York, Chicago and possibly Seattle, and it’s an attractive concept. Gregery Miller, creator of “The Tales of Reverie,” recently moved to Somerville from Brooklyn; even Babs Tarr, the “Batgirl” illustrator in South Carolina, and Kate Leth, the Canadian “Bravest Warriors” and “Patsy Walker, A.K.A. Hellcat!” writer, have considered moving to Somerville, Quinones said. He had no way of knowing if the mass of creators, Comics Roundtable, Mice conference and programs at Lesley and other universities were drawing in even more people. But he wouldn’t be surprised.

“Maybe it’s just a human thing, but I feel like you’re naturally seeking out community. There’s lots of people in comics where even though we seek out these communities we’re relegated to only indulging in these communities either online or at comic conventions,” he said. “But it’s what I have here in Somerville.”

It can make for some interesting double-takes for locals who read comics, and not just because they might be walking past the people drawing the books they’ll be reading a few months later. Quinones has inserted settings such as the Somerville Theatre in his work. Gibson and girlfriend cosplay expert Bethany Fong have appeared in a number of comics (just look for a tall guy with a moppy head of hair next to a shorter woman with bangs and a bow on her head), and Quinones himself has appeared in “Squirrel Girl.” His cat is even more famous.

They even try to get seated near each other when displaying their wares at conventions. And as part of their secret identities as artists among ordinary mortals, they even have a kind of team name.

“It’s sort of our moniker when we go to conventions and such,” Quinones said. “We call ourselves The Somervillains.”