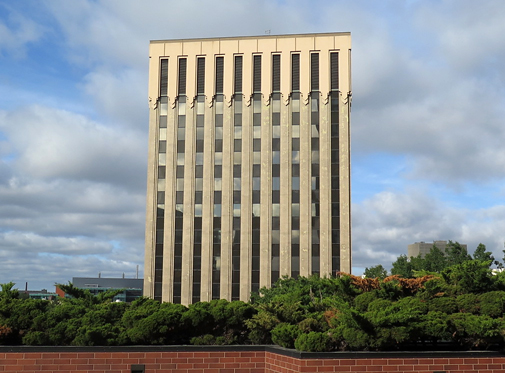 The Massachusetts Institute of Technology has been selected by the federal government to be its partner in developing the John A. Volpe Transportation Center and its 14-acre parcel in Kendall Square, the General Services Administration announced this afternoon.

MIT beat out 12 other firms who had qualified in a three-stage process that began in 2014. The government qualified bidders last year and released a final request for proposals this June. Bidders were to identify key personnel for the project, including a choice of three potential “lead designers” from separate architectural firms. Their responses have not been made public by the government, citing procurement confidentiality laws.

“The next step of the process will be the joint selection of the design team by the federal government and the exchange partner for the new federal facility,” said Patrick Sclafani, spokesman for the GSA.

It remains unclear what the future Volpe parcel will actually look like. The city has been waiting for the government to select a partner before finalizing zoning for the area. The Planning Board had recommended a zoning package last fall, but the City Council felt there was too much uncertainty in what the government would need for it to agree on zoning, so it shelved the process.

City officials recently appointed a Volpe Working Group to provide an “urban design framework” to the site developer – now MIT – and to inform the city’s zoning for the area. That group had its introductory meeting Oct. 20, but has been waiting for the federal process to move forward.

Peter Crawley, president of the East Cambridge Planning team and a member of the working group, said the institute was “an excellent choice, given the pool of applicants. I think MIT has the longest timeframe view … universities typically have 50- to 100-year timeframes that they plan along. In terms of building something with lasting value, I think they’re the top choice.”

Iram Farooq, Cambridge’s assistant city manager for planning, agreed: “I think having an entity like MIT be the selected is actually positive, because they are very rooted in Cambridge. Having somebody with that level of commitment is a good thing for a project.”

“It also is important that what happens on the Volpe site has a lot of impact on MIT’s campus, and so they have an investment in it, not just from a financial perspective, but from wanting a positive outcome long-term on the site, because it abuts their campus,” Farooq said.

MIT spokeswoman Kimberly Allen was unable to address the details of the proposal, including whether it would be exclusively commercial or might contain academic uses; who the proposed three design firms are; how it might interplay with MIT’s existing real estate projects in the area; or how many decades it might take to fully develop the parcel.

But MIT Executive Vice President Israel Ruiz said in a statement that the institute was “delighted” to be chosen. “We look forward to working with the federal government, the City of Cambridge, our Kendall Square neighbors and the MIT community as this process advances,” Ruiz said.

The selection comes as the institute is neck-deep in a permitting for a major development to build 1.5 million square feet across six buildings along Main Street in Kendall Square – one graduate dormitory, one residential building next to One Broadway, three commercial lab or office buildings and one small retail building. The overall project plan for those buildings has been approved by the Planning Board, although it has yet to review individual buildings.

As the selectee, MIT will construct an approximately 400,000-square-foot building to house the Volpe Center, which does transportation research. In exchange, it gets to develop the remainder of the Volpe Parcel at 55 Broadway, which is bounded by Broadway, Third and Binney streets and the 6th Street walkway (excluding the Third Square apartments at 303 Third St.).

According to the GSA’s bid documents, the award was based on three non-price factors and one price factor. The non-price factors were: development, construction and design qualifications; technical approach; and financial qualifications and plan. Details of the price factor have been omitted from public documents, but it appears to reflect the estimated cost of designing and delivering Volpe’s new building, plus a “value equalization amount” that bidders may choose to pay.