Trump vow to end funds to sanctuary cities: What it might mean for Cambridge citizens (update) 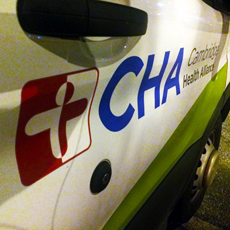 Trump vow to end funds to sanctuary cities: What it might mean for Cambridge citizens (update)

Policies of the incoming Trump administration could mean “a challenging and worrying time” for some Cambridge Health Alliance patients, a trustee of the system says. (Photo: Marc Levy)

City officials are grappling with questions of what President-Elect Donald Trump’s promise to withhold federal funds from sanctuary cities such as Cambridge might mean for the community.

Many consider it too soon to tell the impact, but the tone of officials’ comments showed a commitment to remaining a sanctuary for undocumented citizens, where they are safeguarded against deportation on the grounds of their immigration status alone. Cambridge became a sanctuary city in 1985 in response to the refugee situation arising from the Salvadoran Civil War.

Neighboring Somerville is also a sanctuary city, having adopted the distinction in 1987. Its Mayor Joe Curtatone has defended the status, noting that – contrary to fears whipped up by Trump in speeches – crime is down 41 percent since that year.

With a roundtable on the Envision Cambridge development master plan scheduled for Monday, city councillors and other officials didn’t get a chance to discuss how the city might fare under a President Trump. But Mayor E. Denise Simmons told WBUR’s “Radio Boston” in September that the city was united behind the sanctuary city principle.

His plan to “end sanctuary cities” by refusing to provide them with federal funds could affect everything from education to health care and housing.

Law enforcement is another area where Trump’s proposed policy has sparked concerns. Jeremy Warnick, director of communications and media relations for Cambridge police, however, suggested Trump’s decree would have little effect on operations.

“Per our policies, the enforcement of the nation’s civil immigration laws are the primary responsibility of the federal government. Accordingly, the Cambridge Police Department shall not undertake immigration-related investigations and shall not routinely inquire into the specific immigration status of any person(s) encountered during normal police operations,” Warnick said in an emailed statement.

“This prohibition does not preclude the Cambridge Police Department from cooperating and assisting with federal immigration officials from the DHS Immigration and Customs Enforcement agency when formally requested as part of an ongoing criminal investigation, or from notifying those federal officials in serious situations where a potential threat to public safety or national security is perceived.”

He emphasized that community members should be unafraid of seeking help or protection from police “regardless of their specific immigration and/or documentation status.”

Greg Russ, executive director of the Cambridge Housing Authority, was skeptical Trump’s administration will be able to withhold funds from housing programs. “I am not sure he will be able to do this legally,” Russ said, “as the aid provided is not connected in any way to immigration. So the law would have to change first.”

Mike Johnston, deputy executive director of the agency, added that since it is a separate entity from the City of Cambridge, “it is unclear whether the CHA would even be included in any measures taken by the Trump administration.”

Some are not so optimistic. Tuesday, during a meeting of the board of trustees of Cambridge Health Alliance, vice chairman Joshua Posner said Trump’s election creates “a challenging and worrying time for our community, especially for immigrants and marginalized people at the heart” of the health care system’s mission.

David Cecere, director of corporate communications for the Health Alliance, noted that despite concerns, the impact of this proposal – and the incoming administration’s goal of repealing the Affordable Care Act– is yet to be determined. Cecere said in an emailed statement that “While last week’s presidential election result may reshape our nation’s health care landscape, we believe it is too early to speculate on the impact on components such as funding.”

Though much is still unknown, some offices are starting to consider quantifiable impacts of the proposal. Claire Spinner, chief financial officer of Cambridge Public Schools, said the district gets about $4.5 million to $4.7 million in federal grants each year to support its budget, “so we’d have to assess what that impact were to be when some actual action takes place.” The operating budget for fiscal year 2017 is $173 million.

The district’s federal aid comes primarily in the form of an Idea grant, which provides support for students with disabilities, and Title I funds, need-based grants designed to allocate extra staffing to schools with a lot of economically disadvantaged students. Spinner said these grants make up $2.7 million and $1.2 million of the current budget, respectively.

“This is all very new, and we don’t know what will happen,” Spinner said, “so we’ll have to wait and see.”

Update on Nov. 17, 2016: Simmons and City Manager Louis A. DePasquale sent out a press release “Regarding Cambridge as a Sanctuary City:”

The recent national political climate has generated considerable concern and anxiety on the part of many Cambridge residents, especially members of our immigrant communities. The City of Cambridge wants to clearly state to our community that it is committed to supporting and promoting the safety, health and well-being of all of its residents. As a sanctuary city, Cambridge affirms the basic human rights and dignity of every human being and provides education, health and other services to all residents of Cambridge, regardless of their immigration status.

“The City of Cambridge has been a sanctuary city since April 1985, when the City Council first took steps to protect and support refugees fleeing from political violence and human rights violations in El Salvador, Guatemala and Haiti,” said Cambridge Mayor E. Denise Simmons. “In 1999, the City Council expanded that support to all residents, regardless of immigration status, and has regularly reaffirmed that over the last 20 years. Today, the City of Cambridge remains just as committed to all of our residents as we have been over the past 31 years.”

The city provides support and resources ranging from a Cambridge Immigrant Rights Commission to programing at the Cambridge Community Learning Center to a Community Engagement Team that works to connect hard to reach populations with City services.

“Every Cambridge resident – regardless of their status – is encouraged to seek and obtain assistance from the many resources available to the Cambridge community. Cambridge remains a welcoming community for all,” said Cambridge City Manager Louis A. DePasquale.

Furthermore, a core principle of the Cambridge Police Department’s community policing philosophy is that all community members are encouraged to seek and obtain police assistance and protection, regardless of their specific immigration and/or documentation status. The enforcement of the nation’s civil immigration laws are the primary responsibility of the federal government, and the Cambridge Police Department does not undertake immigration-related investigations and does not routinely inquire into the specific immigration status of any person encountered during normal police operations.

As mayor and city manager of Cambridge, we remain committed to the City’s sanctuary city status and the services and support that we provide to the Cambridge Community.