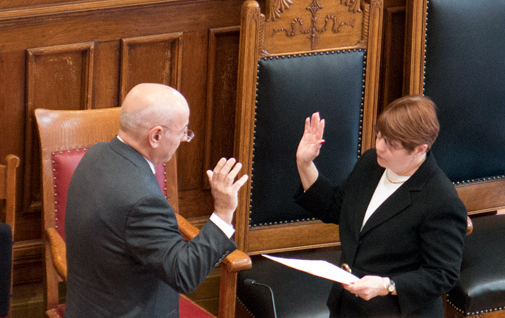 Cambridge has a new city manager, Louis A. DePasquale, and he is one week old. He was sworn in Nov. 14, and at that point, there were 34 items on the “Awaiting Report” list, the set of City Council requests to the manager that result in a report back. 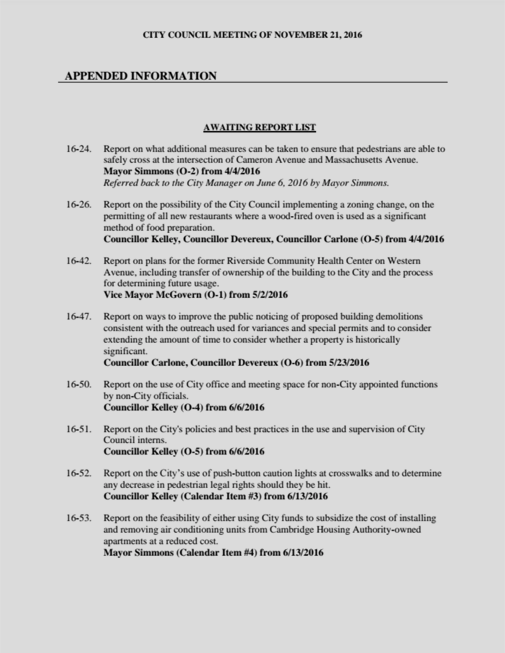 Cheung would remove three orders about bicycle safety, one on audio-visual problems in the council chamber, two about regulating wood-fired stoves and one about closing Memorial Drive on Sundays year-round, to name a few. Cheung was the lead sponsor on three of the 34, and a co-sponsor on another two.

The report list is somewhat of a crude measure, because it does not reflect policy orders that did not request a report back from the manager, even if they requested an action. For instance, the Council passed nine orders related to bike safety Oct. 17 after the death of Joe Lavins in Porter Square, but only four requested a report back from the manager (the four reports were removed from the list Nov. 7 when the council accepted a report on the Nov. 2 committee hearing that addressed them).

“It’s what we’ve historically done when we got a new city manager,” Cheung said Friday.

The council has cleaned the list twice in recent memory. Once at the request of outgoing City Manager Robert W. Healy in 2013, and also at the end of the 2014-15 council term by then-Mayor David P. Maher.

“We did it last time, we pressed reset,” Cheung said. “And then things we want to put back on, we put back on, but things are less likely to get lost if we all take a look and make sure we’re not losing anything with the new manager.”

“I am strongly opposed to clearing the awaiting report list,” first-term councillor Jan Devereux said. “The orders we adopted reflect the council’s well-considered policy initiatives, and many are in response to legitimate concerns that residents have raised. A change of city manager midterm should not erase our efforts over the past 11 months to be responsive public servants. The fact that it was done by a prior council in 2013 doesn’t mean it should become a tradition. I would hope that staff are already working on responses to many of the orders, and I wouldn’t want to convey that their time has been wasted. If there are orders that Mr. DePasquale feels are less of a priority then he has the option of leaving them on the awaiting report list.”

DePasquale said Monday morning: “I appreciate Councillor Cheung’s policy order. Really this is matter for the council to decide. We spend a lot of time on council orders, and I’ll respect whatever their wishes are.”

Vice-mayor Marc McGovern adopted a view in between: “I don’t agree with a ‘clean sweep’ of awaiting reports, and I think councillors should have the opportunity to choose which reports they feel are not longer needed and which they would like to keep on the agenda.”

“I do not know why we’d do it,” said long-time councillor Craig Kelley.

Cheung argued that clearing the list would help keep the council’s work “properly in key” with the new manager, and “we’re not letting things slide through the cracks because they got lost in the transition.” Cheung explained re-filing orders would give the council the opportunity to talk to the new manager about each one and ensure he understood the council’s intent.

“We put them back on. It’s not like they just go away,” he said.

But when the report list was cleared in 2015, things did indeed fall through the cracks. Very few orders were re-filed in the new term, and councillors later expressed regret from some orders that were no longer on the books, such as McGovern and Dennis Carlone’s request from February 2015 that city staff make documents and presentations available three days in advance of council hearings. Despite stating an intention to re-file it, no one did, and councillors continue to complain about receiving voluminous packets seconds before committee hearings.

The mayor and other councillors did not respond to queries left Thursday regarding Cheung’s policy order.