No fanfare for seven-day, 2 a.m. closings, another reversal by License Commission 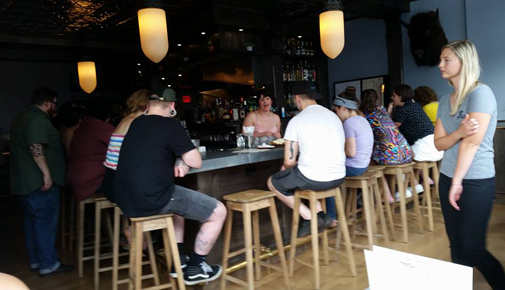 No fanfare for seven-day, 2 a.m. closings, another reversal by License Commission

Lone Star Taco Bar got a seven-day, 2 a.m. alcohol license from the License Commission last week – potentially the first of many. Click on the image to see the original photo on social media. (Photo: Beckie Hunter via Facebook)

Rules for city nightlife continue to be overturned radically but quietly, with the License Commission last week suddenly permitting businesses to stay open serving alcohol until 2 a.m. seven days a week and eliminating a requirement that everyone who is serving must go specifically through the 21 Proof program.

The actions follow steps the commission took in the spring to undo long-held policies about the value (and resulting cost) of alcohol licenses and whether the number of businesses serving alcohol could be capped anywhere in the city.

Commission officials downplayed the nature of the continuing changes, and their timing.

“I wasn’t here in 2014, so I can’t speak to what was granted then. I can’t speak for the past board,” said commission chairwoman Nicole Murati Ferrer after last week’s Wednesday meeting. She began work in Cambridge in January after the departure of Andrea Spears Jackson, who served less than two years.

On the three-person commission, fire chief Gerald Reardon is the longest-serving member, but has been missing from the past several hearings. Acting police commissioner Chris Burke took over regular License Commission duties in May after the retirement of Richard C. Haas.

That gives commission executive director Elizabeth Lint the most institutional memory, but on Monday she also downplayed the meaning of the regulatory changes.

“It’s just that other commissioners did things differently. They were [following state statute],” Lint said. “But if you go by the book, this is what we have to do … it’s what the statute says.”

The last time seven-day 2 a.m. licenses came before the commission, it was for a harsh brush-back.

Felipe’s Taqueria was granted one in late October 2014 after a meeting that included debate about its Harvard Square seasonal roof deck but not a word of comment or debate about its request for a late closing time. A year earlier, Lint told the proprietors of State Park (then to be called SlawDog) that there was no such thing as a seven-day, 2 a.m. license, and that creating one would require a public hearing – and as a result, when the commission realized its mistake, Felipe’s Taqueria was called back in. Somehow, the restaurant wound up apologizing for the commission’s error and losing operating hours.

But on Wednesday, the owners and managers of Lone Star Taco Bar at 635 Cambridge St. walked out with a seven-day, 2 a.m. license, with lawyer Leslie St. Germain saying – at the prompting of Murati Ferrer – that many customers had signed a petition in the hopes of seeing later closing times. During testimony in support of the later closing, Murati Ferrer went further, telling speakers who weren’t sure it was allowed that “I may be ignorant on this, but I don’t know what you’re all referring to.”

When speakers hesitated, Murati Ferrer nudged them toward speaking in favor of a seven-day, 2 a.m. closing. In the end, she and Burke approved the later all-week closing times.

Reached for comment last week and told of the change in licensing rules, Felipe’s co-owner Thomas Brush said he was “certainly” planning to go back to get a 2 a.m. alcohol license at some point.

“I’d like to have that option. There are certain times we wish we had a 2 a.m. license,” Brush said, noting that the nearby Noir cocktail lounge at The Charles Hotel already had a seven-day 2 a.m. alcohol license.

Noir was brought up also by James Rafferty, the attorney representing the Bennett Street Eatery, an oyster restaurant that plans to open in March in the peculiar building at 112 Mount Auburn St. and 2 Bennett St. in Harvard Square. (A former office for conductors for the Massachusetts Bay Transit Authority dating back to 1912, the building is only 20 feet wide. Even renovated, its tight square footage will require food preparation to be done in the basement and carried up to as many as 139 diners on the two floors above.)

Proprietor John Phillip Shorey Gregory arrived with a request for 1 a.m. closing times on weekdays. But upon hearing the Lone Star Taco decision, he asked if the Bennett Street Eatery could also go later. Rafferty pointed to hotel customers and other tourists, as well as university students and people getting out of late-night concerts and films, as cause to keep serving its oysters and drink later than expected.

Commissioners seemed open to the idea, and said they would decide at a future hearing – expected to be Dec. 7.

Toward the end of the meeting, they took up an agenda item dealing with 21 Proof training, which aims to reduce underage drinking in Cambridge. Lint believed the award-winning program of the Cambridge Public Health Department and Cambridge Prevention Coalition was introduced as long ago as 2006, and has been a requirement ever since for any establishment serving alcohol in the city – even if business owners, managers and servers were already certified through equivalent training. Sessions cost $250 for up to five people and $15 for each additional person, and over the years hundreds of businesses have ponied up.

It is also one of the benefits of the Cambridge Licensee Advisory Board, an adjunct of the License Commission for which Lint serves as a board member. Along with being scheduled first for business before the commission, access to on-site or other 21 Proof training is touted on the organization’s website.

Murati Ferrer puzzled over the requirement.

“It’s literally the same training as TIPS certification,” she said, referring to an equivalent program founded in 1982 that operates in 50 states and 40 countries. “Why are we making them go through another [program]?”

Burke agreed that “it doesn’t really make a lot of sense,” and they agreed to decide the issue at the next meeting, after Murati Ferrer had crafted language on which they could vote.