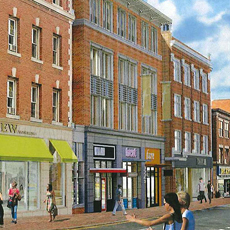 In most dramatic change, brick facade replaces wall of glass
By John Hawkinson 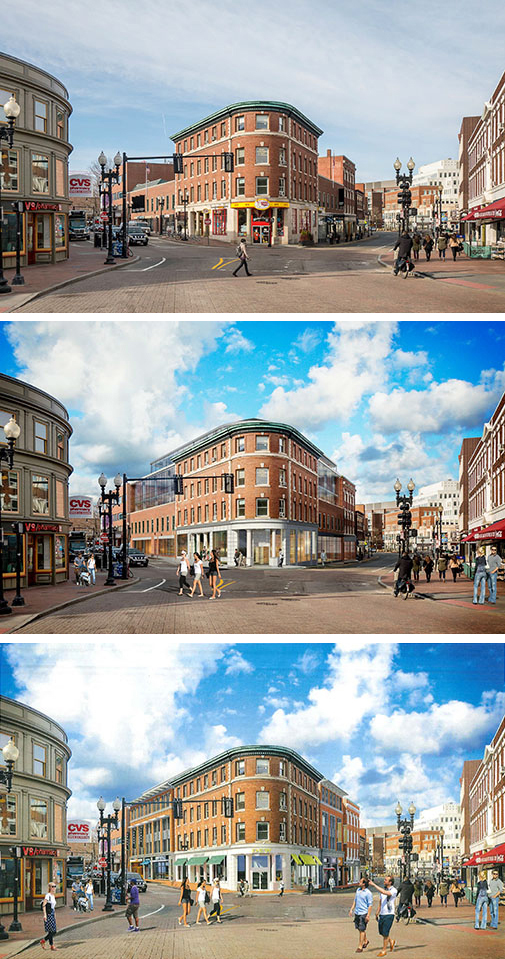 A proposal to redevelop the “Curious George” building and two attached structures in Harvard Square (top) originally saw a prominent glass curtain wall (middle) but has been revised to keep a masonry facade throughout (bottom).

A landmark petition for the “Curious George” building in Harvard Square was submitted to the Historical Commission last week, and the commission will review a changed proposal for an addition to the iconic group of three connected buildings at its meeting tonight from developer Equity One.

At stake are the Abbot Building at 5 JFK St., housing the Curious George store; 9-11 JFK St., with Urban Outfitters; and 18 Brattle St., which includes the clothing shop Tess.

Equity One, which acquired the buildings late last year for $85 million, presented its original proposal – a gut renovation of the interior with a glass addition, bringing the Urban Outfitters building to the height of the other two and adding a floor on top – to the commission at two meetings in September and October. Construction would not start until late 2017 and would last for two years.

Feedback from commission members was that they would like to see an option with less glass. “I keep looking at this and it so reminds me of a cruise ship coming at me, with an observation deck on the top and on the sides,” member Bob Crocker said.

The commission also asked for additional renderings, and questioned various design details. “One of the most chilling things I heard tonight was, ‘retail wants 20-foot ceilings,’” member Bruce Irving said. “We don’t do it that way here, in Harvard Square.”

Feedback from the public was much more harsh. The commission’s jurisdiction is generally limited to building exteriors and views from the public way; many speakers expressed concern for the fate of retail in Harvard Square with increased rents and the survival of stores during the two-year construction period, for the loss of affordable upper-story office space and for the conversion of the Curious George space at the building’s tip into an entryway to the second floor, losing a prime retail space.

Equity One submitted new designs in early November that would demolish the Urban Outfitters building and replace its facade with masonry. There are other small changes. 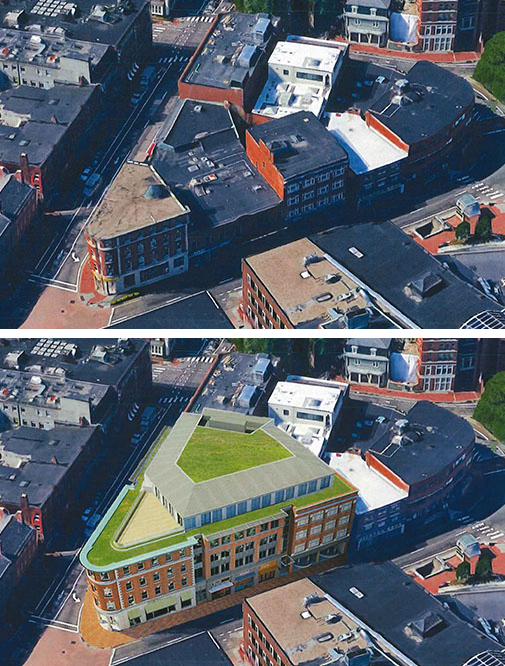 Equity One designs show a roofdeck for a fourth-floor tenant, which could be a restaurant.

On the day before Thanksgiving, 13 residents, acting as the group Our Harvard Square, submitted a petition to the Historical Commission requesting it landmark the Abbot building. Because the building is already in the Harvard Square Conservation District, it is already protected in a way similar to landmarking – a certificate of historical appropriateness is required from the commission to make alterations to the building, and Equity One is already seeking one.

The landmarking study – if the commission opts for one – could take the better part of a year.

Asked what would be different if the building was landmarked, commission Preservation Planner Sarah Burks said, “nothing.”

Suzanne Blier, an architectural historian at Harvard and a signer of the petition, said a landmarking study would allow the commission to more fully understand the historic aspects of the buildings that would be worth preserving. She thought the petition could help change the way the commission staff interacted with developers:

“I think the problem with the Conservation District right now, and specifically with the role the Cambridge Historical Commission is being asked to play, is that they serve as essentially go-betweens and negotiators between community activitists deeply concerned about architectural preservation – historic preservation – and the interest of commercial owners,” Blier said.

Bill Brown, an executive vice president at Equity One who has been the face of the project, did not seem worried by the prospect of the landmark petition, although he had not yet spoken with his attorney. “The building envelope we’re maintaining … we’ve been very clear on that,” he said Monday, referring to the part of the building protected under landmarking.

Our Harvard Square recently petitioned the commission to designate the nearby Out of Town News kiosk as a landmark, and the commission voted to initiate a study. At the time, chairman William B. King expressed concern that doing so for the kiosk building might bring into question the preservation status of other buildings in the area, but the board felt the symbolic gesture – giving the building a “badge” – was warranted by the degree of public concern.

The biggest change in Equity One’s new designs, submitted Nov. 9 to the commission, is to the Urban Outfitters building. The glass addition is gone, as is the historic facade. Instead, the entire exterior is replaced with stonework at the ground level and brick with windows on the upper stories.

Charlie Sullivan, the commission’s executive director, wrote in a file letter that this was a “major change” and would make approval significantly more difficult.

“I think after listening to six hours of questions and comments, etc., we tried to be responsive to the community,” said Equity One’s Brown. “We tried to be responsive to the commission. We’re hopeful they will see we have come a long ways from what was proposed to where we are today, and we think it’s a great solution not only for the community, but for the future tenants.”

In addition to the façade changes, Brown said, the new design expands the area at the tip of the building that serves as the entry to the second-floor tenant in what is now the Curious George space. “The rationale is to provide an opportunity for merchandising [for that second-floor tenant] at street level … we’ve expanded it, we’ve tried to compact the vertical circulation, whether stairs or elevator, and in doing so we were able to grab some floor space,” he said. “I think the stair and elevators were getting a little bit dominant in that space.”

With respect to the new floor on top, “we’ve pulled back the upper fourth floor off the Abbot Building, so that it pulls away from the Harvard Square from a line-of-sight perspective. That’s probably what the biggest view is,” Brown said. “We’ve changed some of the cant of the roofline. We’ve raised the exterior wall, dropped the peak of the pitch, flattened it [into] much less of a ridge. I think that that helps in the perception from street level.”

It was announced last month that Regency Centers would be acquiring Equity One in a deal expected to close in the first quarter of 2017. Brown said it wouldn’t lead to any changes: “Regency’s buying into the pipeline that Equity One’s created. They’re 110 percent committed not only to our Harvard Square project, but our entire pipeline throughout the country. We don’t see anything changing as far as direction or motivation to complete.”

Brown said he anticipated remaining the point person for the project after the acquisition. 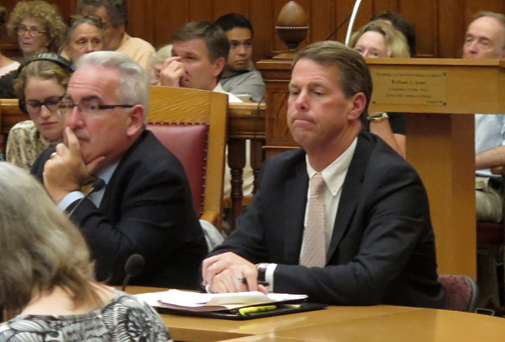 Bill Brown, right, an executive vice president at Equity One, expects to continue as the face of the Harvard Square project after a purchase of the company by Regency Centers. (Photo: John Hawkinson)

The commission has received scores of letters about the project – uniformly negative.

Hugh Russell, an architect and member of the Planning Board who moved his offices out of the buildings recently, expressed a concern that “the usual sequential review process of development in the square” (the Historical Commission reviews first, then the Planning Board reviews a special permit proposal, followed by Inspectional Services and other city departments) “may not best serve the city’s and public’s interest in getting the best possible outcome – one that addresses all of the concerns. Some forum, that also includes the City Council, needs to be found to put all of the issues on the table and solutions developed before final Historical Commission action on the project,” he wrote.

Russell said Tuesday that he favored landmarking the Abbott building, and wrote that the new masonry design “is an improvement over glass curtain wall,” although he remained concerned with the double-height second story.

Blier, the Harvard historian, wrote that “the proposal to raze the brick buildings adjacent to Abbot for a new brick building is unwarranted … these buildings seem overall to be in fine structural shape and the whole ethos of ‘raze and rebuild’ is not only wasteful but goes against core [commission] values of keeping the unique and diverse textures of the architectural fabric.”

Many commenters, in writing and at past meetings, expressed the fear that Equity One intended to create a “mall.” Brown had repeated over and over at the meetings: “It’s absolutely not going to be mall. It’s absolutely safe to say that it will not be a mall,” going on to define a mall as an interior common corridor with storefronts opening onto that space. “Everything will be open to outside; you will have point of entry at grade.” Brown said the second-floor would be a single retail tenant.

But some are not convinced.

“Clearly Equity One – now Regency – is simply interested in leveling the floors so they can create their mall. Malls are Regency’s thing,” wrote Susan Miller-Havens, an artist with an office in 18 Brattle. “It is not appropriate to demolish a historic building that is not in need of demolishing. To say nothing of what this project will do in terms of shutting down the square and destroying small businesses.”

“This proposal, if blessed by you, will contribute to the further dehumanization, homogenization, sanitization, corporatization and passing of unique, funky, vibrant, zany-rare Harvard Square,” wrote Carole Perrault, a professional architectural historian, responding to the original design.

The City Council has also expressed concern about the retail situation in Harvard Square. Councillor Jan Devereux, chairwoman of the council’s Economic Development committee, has scheduled a meeting for Dec. 13 to “discuss recent and anticipated development projects and commercial and institutional leasing in Harvard Square, and how such changes may affect the future of Harvard Square.”

The meeting invites not only Equity One, which says it will attend, but also developer Gerald Chan, who has bought up much of Harvard Square and has several properties remaining untenanted; also Colliers International; the Dow & Stearns Trust; Harvard University; and the Harvard Square Business Association.