Foundry redevelopment process is halted, with call for refinements on a second try 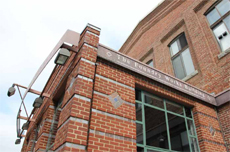 Foundry redevelopment process is halted, with call for refinements on a second try

CRA: Disagreement about goals could lead to repeated problems
By Chloe Reichel

The Foundry building in East Cambridge has been owned by the city since 2012.

The Cambridge Redevelopment Authority halted the redevelopment process for the Foundry building Wednesday, effectively opening the door to start over again on the project. Board members voted unanimously on the motion.

In addition to ending the current procurement process for a developer, the decision called upon the city manager, the Foundry Advisory Committee and members of the public to work with the agency to develop a new strategy to move forward.

The decision to stop the process comes after months of intense City Council and community debate. Councillors, community organizations and residents expressed concerns about the proposal selected at the conclusion of the first request for proposals, in which Graffito SP, the Cambridge Innovation Center and Hacin + Associates – joined as Kendall Square Foundry Development Partners – was the only submission.

The 37,500-square-foot Foundry, at 101 Rogers St., was deeded to the city in 2012 as part of a development zoning deal that specified “a preference for its use for municipal or community uses.” It could take around $25 million to revitalize the East Cambridge building, but only $6 million was set aside in May 2015. The Partners’ plans within that funding didn’t match up to community expectations.

Now those plans are canceled, though residents have said that if there were to be a new process, the Partners would be strong contenders for the CRA to select.

“I don’t think this is the conclusion that either party wanted to reach,” said Tom Evans, executive director of the agency. “It’s not that CIC/Graffito did anything wrong in the process, and I certainly don’t think we did anything wrong in the process, but … it certainly did not help to only have one bid. In any procurement, it’s good to have other bidders. So that may have been a sign that we were creating a very difficult situation.”

The termination of the process means the city can now designate additional funds and develop new parameters for the project. Adding funds during the procurement would have automatically triggered a new request for proposals, disrupting the Redevelopment Authority’s work.

“The city has been very respectful that this is the CRA’s process and [of] the desire to let the process play out,” Evans said. “That being said, I think the sense is the process is ours, and it’s a little stuck.”

Board members described the initial procurement process as a productive learning experience. Ideas were discussed for next steps, such as emphasizing science, technology, engineering, arts and math functions in the reformulated call for proposals, offering additional design guidance and in general refining the RFP to speed up decision-making. It would be helpful to have “a little upfront work before going out again – to have that more defined so we don’t have that debate on program on the back end,” Evans said.

Evans and Kathryn Madden, strategic planner for the agency, suggested the importance of maintaining connections to the private sector, both to manage redevelopment costs and because it could lead to “something a bit more dynamic” than what an exclusively public-run building might accomplish.

Many members of the board expressed concerns about public expectations compared with what a redeveloped Foundry might realistically be able to accomplish. With all the community expectations in the first round, it was “really hard to get a definitive handle on the program for it,” said Kathleen Born, chairwoman of the board.

Similar issues could affect the second try, said Margaret Drury, vice chairwoman. “We heard a lot of deep divisions in the public” during the first procurement, she said. “There really needs to be some work on that if we want to have a successful second process.”

Though the agency expressed optimism, there were doubts whether factors contributing to the low rate of submissions to the first RFP were changeable. “The private sector didn’t flock to this project – partly because of the financing, but partly just because it’s so hugely political, and it’s only going to be more political,” Madden said. “As some of our advisory committee reminds us, capital has other choices of where to go.”

During the meeting, board members discussed briefly the recent petition to initiate a landmarking designation study for the Foundry, which was built in 1890 and expanded in 1910. Some expressed concerns on additional delays this might add. Born suggested the agency not offer a stance on whether the building should receive landmark status, though she noted that such a designation does not necessarily require the full restoration of the building.