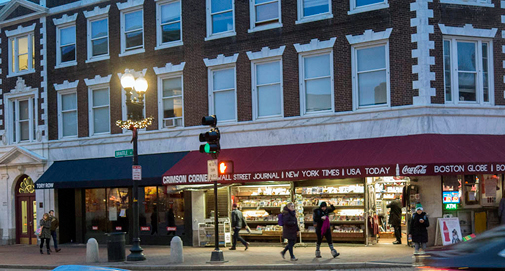 Harvard Square’s Crimson Corner newsstand, once Nini’s Corner, is gone at the end of this month. It loses its lease in favor of an incoming &pizza, set to occupy the newsstand and the storefront to the left, most recently the Tory Row restaurant and before that an eatery called The Greenhouse.

Chris Kotelly owns Crimson Corner, and it’s been in his family for 54 years. When Out of Town News, just across Massachusetts Avenue, was expected to close in 2008, Kotelly said there “would always be a place” for a newsstand in Harvard Square. Out of Town News is still expected to leave – it’s on a month-to-month lease from the City of Cambridge, which is exploring options for the kiosk space.

“We are very open on programming for the kiosk to include continued use for a portion as newsstand,” Deputy City Manager Lisa Peterson said Tuesday. “We will have to see what comes out of the public/working group process.”

“It’s kind of ironic,” said Kotelly, wearing a New York Times sweatshirt. He expected to outlast Out of Town News. 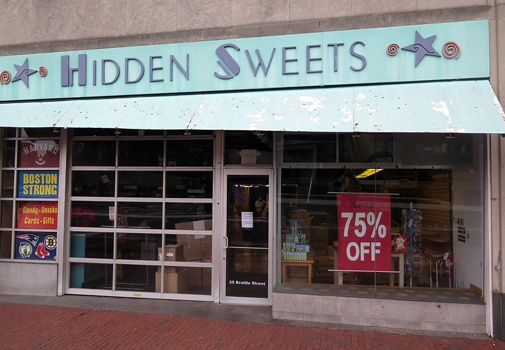 Hidden Sweets, at 25 Brattle, closed last month, and the neighboring Sound Lion store at 35 Brattle is still vacant after closing last year. Across the street, Pinkberry frozen yogurt is expected to close, to be replaced by a Pressed Juicery, a nutrition-focused cold-pressed juice chain based in California.

All this is against the backdrop, literally, of the Curious George children’s bookstore having to find a new home when two years of gut renovation starts on its home, the Abbot building, and two adjacent properties. Vision House, Tess, Urban Outfitters, Tealuxe and other retail and office tenants will be ousted from the three connected buildings, which are to be combined into a retail and office project called The Collection at Harvard Square.

Pizzeria Uno on JFK Street closed last year. So did City Sports farther up Brattle – both still vacant. Also Fire and Ice. The Tannery restructured its ownership and changed names.

Sweet Pizza got zoning approval last month to open up at 56 JFK St. 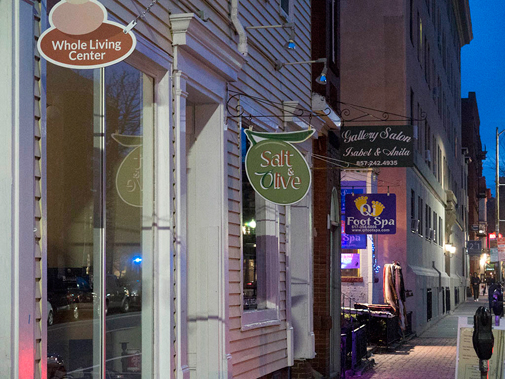 “We are exploring expanding into the space next door,” Salt & Olive owner Mary Dean Taylor said, noting that the boutique’s owner is retiring. “We aren’t a big business, we aren’t a chain, and we want to represent the independent spirit of Harvard square.”

It’s a whole lot of changes, and city councillors are worried.

“It feels to many of us as though Harvard Square is need of something of an intervention,” councillor Jan Devereux said at a hearing she convened in mid-December to discuss the future of the square.

“If we let market forces just continue to drive all of these decisions, we’re in in jeopardy of losing important cultural landmarks and legacy businesses that have made the square what it is. And I know this is a perennial conversation, but I think we’ve reached a point where we need to have that perennial conversation again.”

Some “can’t pay the rent” 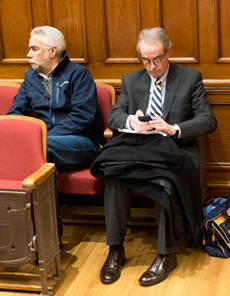 All those properties on the east side of Brattle – Tory Row, Nini’s Corner, Hidden Sweets and Sound Lion – are owned by the Dow family, which changed property managers a few years ago to Colliers International; these changes are Colliers’ first big ones.

“The key to any retail or any tenancy in a commercial building is the quality of the tenant you have there,” said Dennis Callahan, an executive vice president for Colliers who handles these properties. “We want to bring tenants into our building who have the wherewithal to provide a service to the community.”

“We are not terminating leases where tenants are doing well and want to stay in the building and do well,” Callahan said. “you will see some vacancies where that formula is not working for the retailer, and it’s not working for the owner, and there’s a mutual understanding that the way forward is not going to work for them.”

“There are some that can’t pay the rent,” he said.

Tenants, mostly on five-year leases, said they went for months without hearing any reply from Colliers about renewal, leaving a lot of painful uncertainty.

Callahan was at the council’s December hearing, but he declined to come to the table and speak, unlike the other property owners and managers. He sat in the far back corner of the gallery and watched silently.

The Dow family owned about half of the buildings that were sold to Equity One, a national developer that is transforming the Abbot building and its neighbors. Pamela Dow Brown of Newburyport and Wells Dow of Plymouth, officers of family entities that own the remaining properties, did not respond to requests for comment. 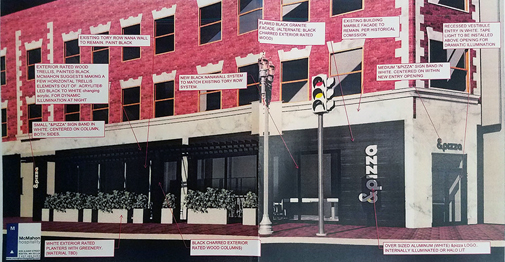 Crimson Corner would be combined with the former Tory Row restaurant space to form space for an &pizza eatery with this storefront design.

Many of the new businesses need some kind of regulatory approval from the city.

The &pizza joint is on the Cambridge Historical Commission agenda Thursday to present its storefront design replacing Tory Row and Crimson Corner. At the same meeting the commission will consider a proposal to landmark the Abbot building, sometimes called “the Curious George building.” But landmarking won’t affect the current development proposals, which don’t change the historic façade.

Fast-order food businesses in Harvard Square need special permits to operate, granted by the Board of Zoning Appeals with advice from the Harvard Square Advisory Committee, to guard against traffic problems and ensure each fulfills a need – but special permits are a lot easier to get than variances. If you meet the written criteria for a special permit, the board usually grants it.

The advisory committee is to hear &pizza Monday, and then the zoning board the next Thursday.

The Monday meeting will also hear a presentation from Pressed Juice, but the company has not submitted materials or responded to requests for comment. The Thursday hearing also covers Salt & Olive’s expansion.

When the zoning board approved Sweet Pizza in December, nobody showed up to speak for or against the proposal.

“There’s always a need for a pizza joint, ” owner Steve Stefanopoulos said to the board. He was approved. 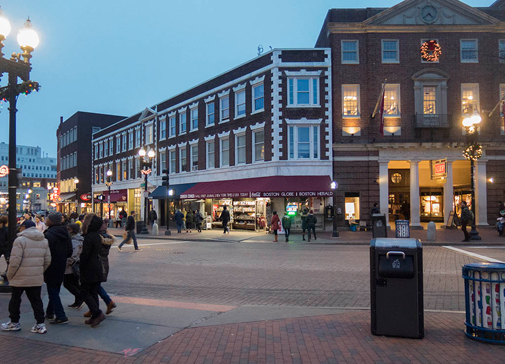 What kind of retail is necessary to succeed in Harvard Square?

“Foot traffic. Creating foot traffic. That’s the basic formula,” said Dick Getz, who came to Harvard Square in 1987 and managed the Brattle Street properties for the Dow family until he was replaced by Colliers.

“End the foot traffic and you’re not going to have much business. You can’t have every store that’s replicated in every town. Finding those small mom and pops or those regional stores is very very hard. Especially that can make it in Harvard Square. It’s a constant balancing act,” Getz said.

Parking is the critical factor that makes Harvard Square different from other retail districts, Getz said – there isn’t much of it.

“People won’t come there as much as a destination without the parking,” he said. “Your market is pretty much going to be people that live in the area. They can walk into the square. Parking is very important.”

“Harvard Square was different when the Red Line ended where the Kennedy School of Government is. That’s when things were really going well in the square,” he said, reminiscing about a time commuters parked cars and walked to and from the T.

“Then they extend the Red Line. Foot traffic slowed down at that point; people weren’t getting off the Red Line. They took all those pedestrians and put them out to Alewife. That’s where a big change came from.”

“It was done before I got here,” Getz said.

This post was updated Jan. 4, 2017, to correct into which storefront Salt & Olive is exploring expanding, and to note that the possible expansion comes with the retirement of a neighboring store owner. It gave updated information on The Tannery on Jan. 5, 2017.