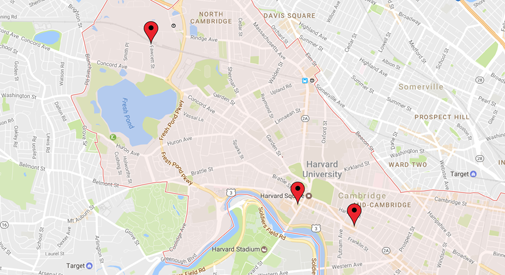 The rules avoid “clustering,” but councillor Leland Cheung acknowledged “you may have multiple – two or three – in places like Central Square.”

The amendment provides for “limited establishment” of dispensaries as authorized by state law. The main features of the zoning are that dispensaries must be at least 1,800 linear feet away from each other, to avoid clustering, and at least 500 feet from any area where children commonly gather.

It passed 6-3 after some debate and the adoption of two amendments to the language of the ordinance.

Councillor David Maher expressed doubts about the minimum distance – which started at 1,500 feet before an amendment by councillor Jan Devereux – and its efficacy as a buffer, suggesting it might be possible to end up with two dispensaries at either end of one street, but Cheung countered that the distance was more than four football field lengths apart, and had the additional provision about areas where children congregate.

Vice mayor Marc McGovern echoed this, saying, “We’re not going to have clusters. When you look at the map, it’s not going to pan out that way.”

The council retains an additional “layer of discretion” regarding dispensaries because it still has to issue a letter of approval or non-opposition before an applicant can go to the Planning Board, McGovern noted.

This is the first medical marijuana zoning initiative passed by the council to address the issue on a uniform, citywide basis. Prior accommodations included medical marijuana districts in Alewife and North Point, and an independent zoning petition to allow for a dispensary near Harvard Square.

The Planning Board opposed the amended zoning despite being “very supportive of medical marijuana over the years,” chairman H Theodore Cohen said in an official opinion, because there is “a great deal of uncertainty regarding the recent non-medical marijuana law.”

Councillor Craig Kelley contributed another of the three votes against the ordinance. “This isn’t perfect, and in its imperfections, it would be creating property rights,” he said. “Whoever comes down the pike, we can’t then go back and say, ‘Hey, we got it wrong last year or we got it wrong the year before, you can’t do this anymore.’”

Many expressed, and ultimately acted on, a desire to move forward despite the potential changes. McGovern encouraged his fellow councillors to pass the amendment, and John Greene, chief executive of the Greeneway Wellness Foundation – making a second bid to open a dispensary in Cambridge – exhorted councillors during public comment to do the same. “Don’t delay,” he said. “Patients in Cambridge cannot wait.”

Cambridge has yet to see a dispensary open, despite a few earlier attempts since November 2012, when voters statewide passed a Massachusetts Medical Marijuana Initiative legalizing the sale of the drug for patients with a physician-recommended, state-issued registration card. In Cambridge, 79 percent of voters were in favor of this ballot question.