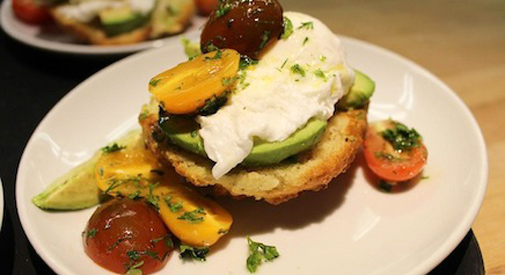 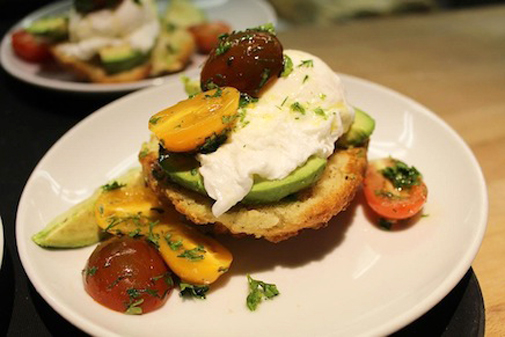 An Avocado Benedict is among the offerings at Club Passim’s Live Music Brunch, starting this weekend.

There’s been two weeks of tests, said Michael Bissante, manager of the Kitchen at Passim, leading to “subtle changes to the menu” and staff preparedness for paying crowds.

“We’ve confident that we [can] offer a really unique brunch experience,” Bissante said, listing some of what’s offered: Avocado Benedict, Stuffed French Toast, Parfait House Granola, a Passim Breakfast Sandwich and BKK Street Bread – bread slathered in a mix of sugar and butter and griddled. All menu items will be created from scratch with fresh and locally sourced ingredients, he said, and vegetarian and vegan options are available. A brunch menu and music schedule is here.

Passim closed its popular Veggie Planet pizza and salad kitchen in August 2014, leaving the kitchen dark until bringing on chef Brandon Arms in March 2015, promising globally inspired New American cuisine on sharing plates and in entrees such as a Grass-Fed Burger, Butter Poached Lobster, Pan-Seared Salmon and Southern Fried Chicken. The plan was to add more music, breakfasts, lunches and weekend brunches to make the club a place people could visit all day long, but the plans got walked back a bit. Dinner, too, is simpler under Bissante, with burgers dominating and nothing else much more complicated than a ravioli made fresh in Somerville’s Davis Square.

Though it’s late arriving, “brunch will make Club Passim a destination from morning to night” on weekends, said Jim Wooster, executive director of the nonprofit.