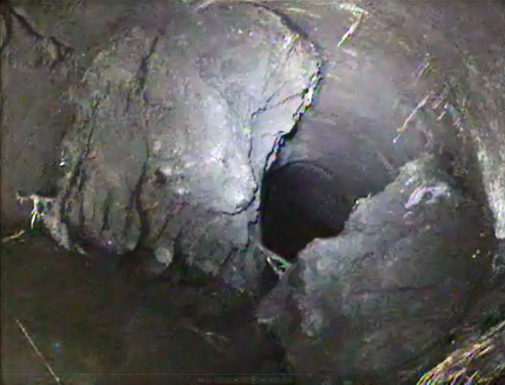 A large root ball from an overhead tree infiltrates Cambridge water pipeline at the Stony Brook Conduit in Watertown, near the Watertown Mall off Arsenal Street, in an image provided by the Cambridge Water Department.

The removal of 23 trees in Watertown was bad public relations for Cambridge, officials acknowledged, and they would try to do better – but the work was made necessary by the invasion of giant roots into the pipeline bringing water into the city.

The pipeline – installed in the 1800s along railroad tracks and now following Watertown’s Linear Park – runs seven miles starting in Waltham, bringing water from the Stony Brook and Hobbs Brook reservoirs. Cambridge owns the 20-foot-wide strip of land overhead, and went in for several days starting in early February to take out trees judged close enough to the pipe to be a threat.

Root infiltration is seen in parts of the pipeline where trees were cut down last month in Watertown in images from Water Department video.

In several cases, the threat was immediate.

“Trees look for water, and there’s water flowing through these pipes. It happens in our sewer systems and our basin systems in the city as well: Roots find their way into these pipes. And sometimes they grow enormous – roots can be four or feet in diameter in the pipes themselves, causing the pipes to rupture,” said Owen O’Riordan, commissioner of the city’s Department of Public Works, at a Monday meeting of the City Council. “And there are a couple of instance we have uncovered in sections of this conduit where you have root balls of that size that can cause significant and immediate damage.”

The largest root invaders are hard to make out in images provided by the Cambridge Water Department – most are stills from video taken to show penetration of the 16-inch pipe, and conditions inside the 63-inch diameter conduit are humid and dark. But Mark F. Gallagher, director of engineering and distribution at the department, confirmed O’Riordan’s description. “Having been personally involved in the removal of one of the biggest root balls,” Gallagher said, “the volume removed completely filled the loader bucket of our backhoe.”

Still, even with announcements from Watertown public officials and reports in local media, people in both communities were shocked and upset by the removal of dozens of mature shade trees. A total of 26 had been tagged for removal.

The result was a “public relations flap” that could be repeated as Cambridge looks to gain access to manholes and protect other parts of its pipeline, councillor Jan Devereux said, asking city staff to put together a map of where warnings might need to be issues next.

Councillors Craig Kelley and Nadeem Mazen agreed. “We’re paying for the aftermath with extra work and discussion,” Mazen said, suggesting that “a fraction of this amount of communication” would be helpful in the future.

City Manager Louis A. DePasquale pointed out the degree to which the city had already reached out, despite the pipeline land being technically private property, though promising that officials “were listening” to unrest over how the tree-clearing went down. The Water Department has been asked to put together the map Devereux suggested, and some sort of good-faith gesture to replace some of Watertown’s lost tree canopy is “in discussion,” DePasquale said, though Cambridge wasn’t ready to commit. Devereux suggested at least making some meadow-like improvements to beautify the area where the cuts took place.

Residents such as Florrie Wescoat also called it “the right thing to do” during public comment before the council. The term “reparations” has been used.

The cutting was likely not over, though.

There are places where the pipeline runs only two or three feet underground and there are trees immediately next to or above it, O’Riordan said.

“It’s going to be a real challenge to protect a lot of these trees,” O’Riordan said. “We will work with consultants to make the decision on how best to protect the pipe and, secondarily, preserve as many trees as possible.”