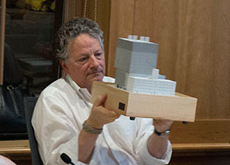 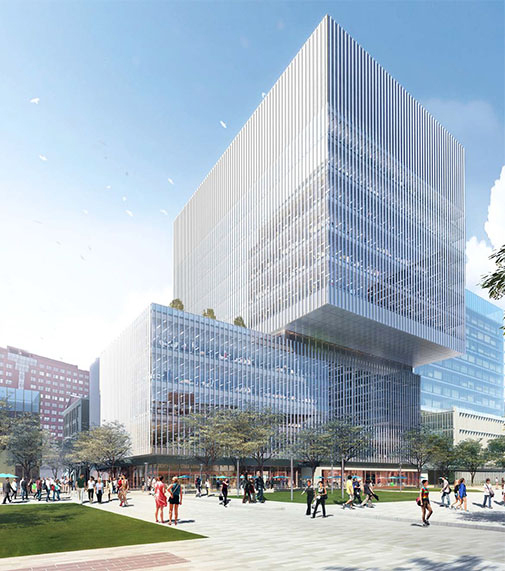 The Massachusetts Institute of Technology presented the second of its new South of Main – “SoMa” – buildings to the Planning Board for design review Tuesday, a commercial laboratory building cantilevered above and incorporating the Kendall Clock Tower Building at 238 Main St., and got sharp criticism from almost the entire board. MIT wants to start construction soon, but it will have to regroup and return to the board.

The institute received two Planned Unit Development special permits for its South of Main and North of Main projects from the board in late spring 2016. Unlike with typical PUDs, the institute had presented nearly complete architectural concepts for all of its buildings. It got approval for locations and sizes of buildings, not specific designs.

The institute also got tentative approval Tuesday for the design of open space behind those buildings, although the board’s reception was cool there as well, expressing that concerns raised at a hearing in November had not been fully addressed. MIT has plenty of time to work on the open space design while a 1,500-car parking garage is built beneath it.

Tuesday’s presentations were delayed from a Feb. 27 hearing at which a packed agenda would have started them at 11 p.m. – too late to start such complex presentations, the board felt.

The board’s schedule has MIT returning March 21 for its One Broadway addition; and March 28 for the third Main Street building, replacing the Cambridge Trust building just west of the Kendall T headhouse. But the ambitious schedule could be slowed if the institute can’t satisfy the board.

The institute has advanced the timeline of its Main Street development, said Maureen McCaffrey of the MIT Investment Management Co., after “receiving significant interest from potential tenants.” (Video link)

Only two members of the general public – regulars – attended the hearings, and they spoke only to lighting issues, not architectural ones. No one from the MIT community (including its architectural school) attended. 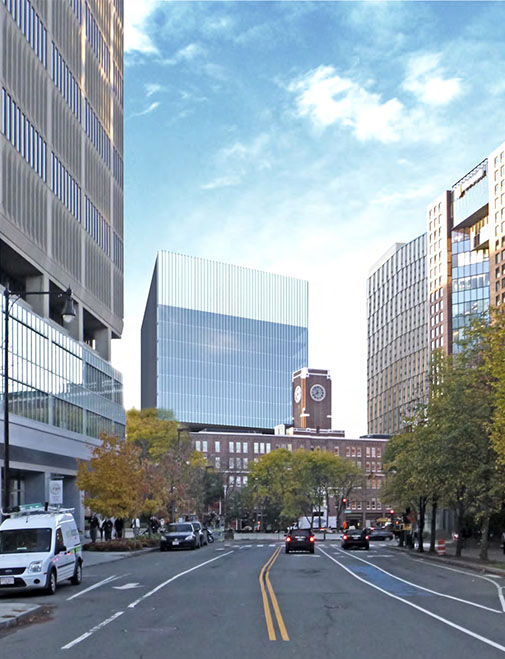 Planning Board members looked at how a proposed building incorporates a historic clock tower.

MIT’s SoMa Building 3 is a 12-story, 235-foot-high building with 380,000 square feet of floor area, designed by Perkins+Will. It starts with five stories south of 238 Main St. (the Kendall Clock Tower building); the next six stories rotate a quarter-turn and rise above the existing historic building, cantilevering out over open space to the rear. A five-story glass atrium connects the two buildings; the façade is glass curtain with nine-inch aluminum fins projecting every 2.5 feet. The first floor will have retail, including a large space earmarked for a pharmacy.

“MIT’s got one chance to build Kendall Square – one chance to get it right. And if they don’t get it right the students will go to Stanford and they won’t come to MIT, and that would be terrible. We have to be really, really careful with each of these buildings.”

“This is a really, really, thoughtful, careful, extraordinary firm,” he said, referring to Perkins+Will. But it has produced a project where “I just don’t understand what I’m looking at. I’m deeply deeply puzzled by this.”

“I share Tom’s inability to understand and comment. I think I understand the first-story elevation from the renderings, and I think that’s fine,” said architect and board member Hugh Russell. “Yet I can see it’s going to work visually – if you’re trying to get something that’s absolutely featureless.”

“All of these buildings have puzzled me. I was pleased that the next building developed a palette of color, a scale to the curtain wall that you can relate to in some ways, even though it’s 27 stories tall. So I don’t know what to say about this. And I’ve been a practicing architect for almost 50 years,” Russell said.

Russell and Sieniewicz said the façade of the new building was featureless compared with the texture and scale of the historic clock tower building it abuts.

Chairman H Theodore Cohen, an attorney, continued the trend: “I have difficulty with the building too. I don’t quite understand the comment that it relates to 238 Main St. If the idea is that it’s a blank wall setting off 238, maybe that works? But I don’t see how the buildings relate to each other at all. I thought my not understanding was just my ignorance: that I was not an architect.” 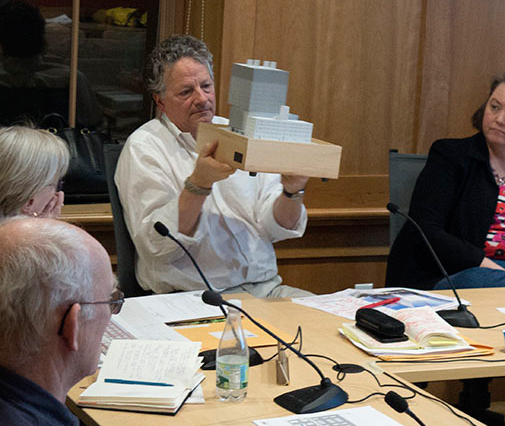 More interesting than its renderings?

Builder and attorney Steve Cohen offered a more tempered view: “To some extent I reacted the same way that: I wasn’t really sure what I was looking at, and what it’s was going to really look like and feel like in the real world. But I frequently feel that way about buildings.”

“It seems to be obviously primarily about the interesting geometry of one form and turning it 90 degrees. If there’s one statement, one descriptive thing to say about the building, it’s that geometric twist – which is interesting to me, and very strong — but especially when you look at the perspective rendering on the cover.

“When you look at all the elevations, they’re misleading. They’re flat and stupid-looking because you don’t see that geometry. You’re just seeing a two-dimensional projection of that geometry.”

“My gut feeling is that the building in three dimensions in the world is going to be more interesting-looking than many of these flat elevations make it look. And if the fins which are projecting out from the building are going to make some interesting texture, I imagine as light changes during the day, it’s going to move and change.”

Pierce passed around a physical model of the project to the board: “We had a hard time drawing orthographic flat elevations of the building, because they really don’t tell the story of the kind of dynamism of the skin.”

Speaking to Sieniewicz, Pierce said they had looked at the SoMa project holistically: “It’s hard to look at this building in isolation. It really has to exist within the larger context of all the other things that are happening around it. When you look at [the dormitory east of the T headhouse], which is very articulate and does have more color and a lot of relief in a different way, we feel like they complement each other well.”

“The volumetric move is kind of the main, the big thing … resolving the desire to present a more slender face to Main Street, and as a backdrop for 238 Main St., and at the same time resolving that desire for the east/west connection connecting the Infinite Corridor with the Sloan School. It’s really resulted in this kind-of unique solution.”

“It’s true there’s very little similarity in terms of scale and articulation between 238 and the new building,” Pierce said, but “we spent a lot of time looking at the views form Third Street looking down, not just how this affects the way sun reaches Main Street, but also how this exists behind the historic building at 238 Main St., and as a very respectful backdrop. I think we felt this was a very strong response to that.”

Sieniewicz praised the atrium between the old and new buildings, calling it “extraordinary,” before turning back to the design of the new building: “Do we really need to insist that it’s going to be exactly the same in scale all the way around because it’s going to be some crystalline and pure form? … It’s a one-liner. When it begins to play in the light, I’m sure it will be dynamic, but still, everybody understands the world in varying degrees of light and I just think it could have more dimension. In terms of ideas and architecture. In terms of the way it might deform and recognize its place within our city – its specific place within our city … looking for a sense of it being something of where we are, this extraordinary place on the planet at MIT.” 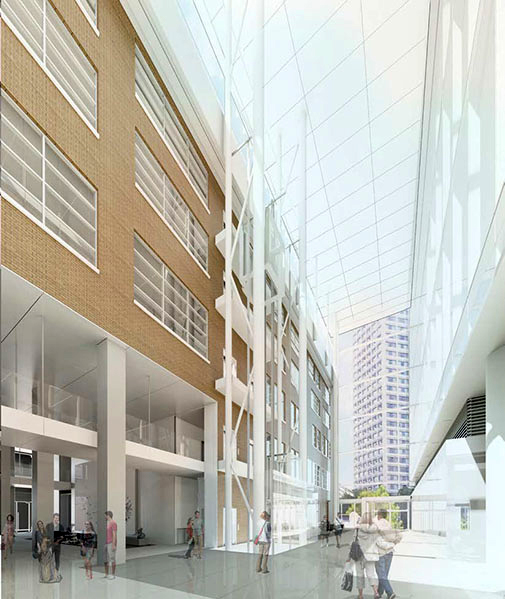 A five-story glass atrium in the proposed building drew praise from Sieniewicz.

H Theodore Cohen questioned the view from Boston: “Coming over the bridge, what you’re going to see are two glass cubes … but when you go up Main Street, or if you’re looking down from Third, you’re just going to see a big glass cube.”

Pierce had referred to the PricewaterhouseCoopers building at 101 Seaport Blvd. as a reference for the glass façade of this building, but the board did not take it well.

“It’s unfortunate that you referenced the Seaport,” H Theodore Cohen said, “because I think the biggest complaint I hear about it is that it’s just glass cubes. … A lot of them are very dark glass cubes. It seems like that’s what we’re doing here. It gives me pause.”

Sieniewicz then switched gears: “Let me try to be helpful,” he said. Sieniewicz cited the example of the Phillips Exeter Academy Library in Exeter, N.H., “an incredibly simple volume and from a distance you would say, ‘that’s the dumbest building I ever saw’ … it looks like a brick warehouse … but then when you step up close to it … it is profoundly beautiful. It has to do with the way it’s made, and the surprises you meet that are unexpected. You enter on a corner. The scale of the way in which it’s all put together is profoundly cozy … and human; it’s really an extraordinary thing when you get involved in it and there are lots of surprises and it’s made beautiful by basically three materials. So there’s a minimalist spirit about it which is extraordinarily profound.”

Convince us, the board says

“And I think what you’ve been trying to do tonight is to convince the board that actually this building’s operating in the same way,” Sieniewicz said. “That you’ve got fins that extend pretty far out – that’s a bit of an engineering feat there, coming out nine inches off the face of that building – that are going to capture the light – are going to operate on some level the way that Lou Kahn’s building works at Exeter. There’s a level of detail that’s human, the way in which that works visually when you look at it more closely, the way it plays in light that’s going to be profound and going to be cozier than your first acknowledgment of that you’re seeing before you. … That would be the task.”

“You weren’t so successful in convincing at least this Planning Board member that that’s the way the building is operating, but I think you believe it’s operating that way and that’s what you’re trying to do. To be helpful, I would suggest I maybe need some more convincing, or maybe there’s a way in which we can look at the details in that light and come back to the Planning Board and say okay, here’s ways in which the building deforms the way that Exeter does in its subtle and beautiful ways, and you didn’t see it before, or here’s a way in which you might have modified and adjusted the design to make it operate that way.”

Pierce suggested that he needed to come back with a better expression of how the building changes from different points of view, and suggested time-lapse images or video “or something moving around.”

Sieniewicz also suggested that Perkins+Will should build a more realistic mockup model of the façade; the one on display at 195 Albany St., lacks depth.

H Theodore Cohen summarized: “Many members of the board are not comfortable at this point with this particular design. Suggestions have been made. Maybe there are some design changes that the architects and client wish to do. Or if they don’t wish to do that, then to try to explain to us better why this is the appropriate design, and why it really works. And I think that’s up to them.”

“But other than that, we love you,” Steve Cohen said.