MIT dorm, 28 stories over Kendall Square, coming before Planning Board on Tuesday 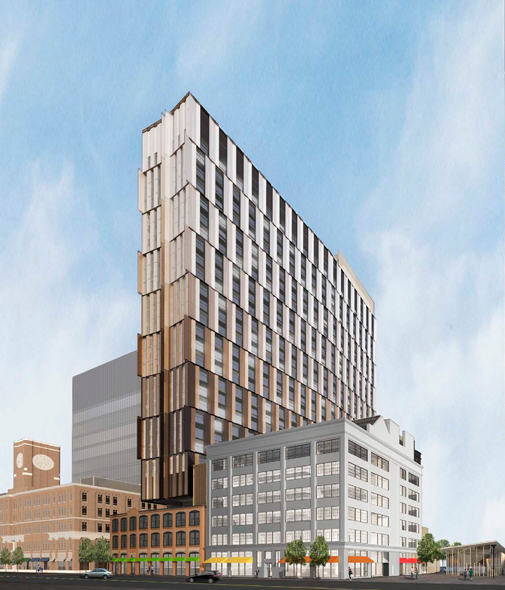 MIT dorm, 28 stories over Kendall Square, coming before Planning Board on Tuesday

Some details emerge on Volpe parcel, with academic use unlikely
By John Hawkinson

An architects’ rendering shows the Massachusetts’ Institute of Technology’s proposed dormitory, seen from the north side of Main Street in Kendall Square. (Image: Nadaaa and Perkins+Will)

The design for a new, 28-story Kendall Square dormitory south of Main Street and an open space plan for its five-building complex are to be presented Tuesday by the Massachusetts Institute of Technology to the Planning Board.

The plans are unrelated  to the announcement two weeks ago that MIT was the winner of a government procurement process to develop the federal 14-acre Volpe parcel in Kendall Square, just a block from its south-of-Main development. The institute has not responded to press inquiries on its Volpe plans, citing a request from the government to maintain confidentiality.

A big question is whether the institute will use the Volpe acreage for its own academic or institutional purposes, rather than behave like the other bidders: as a for-profit developer. The answer seems to be it might – but not at first. The project will be required to include residential and commercial space under the city’s expected zoning for the area. 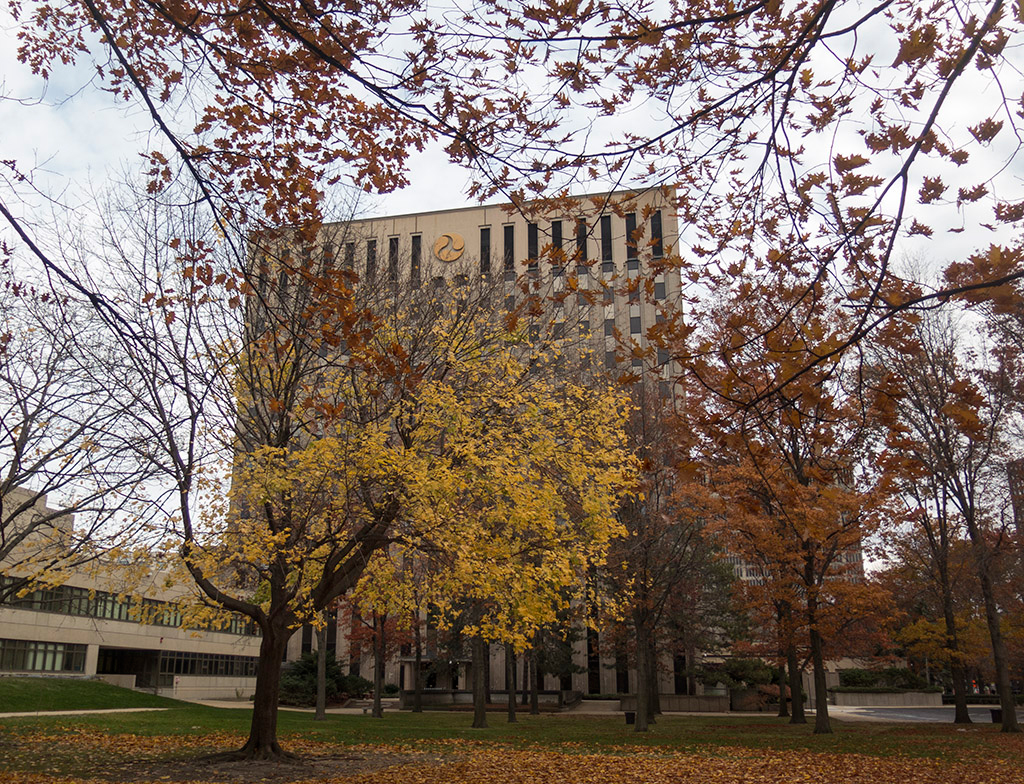 Future uses for the 14-acre Volpe parcel, which the institute plans to develop, are unknown. (Photo: John Hawkinson)

Institute President L. Rafael Reif announced at a Nov. 16 faculty meeting that the initial use of the property would have to make money, and Executive Vice President Israel Ruiz said in a published statement, “we don’t anticipate that the Volpe property will house academic buildings in the near term.” Provost Martin Schmidt said a faculty advisory committee would be established, and Ruiz confirmed: “We intend to engage MIT faculty, students and staff in this process.”

Joseph Maguire, a senior vice president at Alexandria Real Estate Equities, suggested that by not winning the bid, his firm “may have won” – an allusion to the fact the economics of the Volpe project remain uncertain and it’s unlikely to be a cash cow for MIT. But Maguire also said he and other bidders were still in the running in the event its deal fell through.

Because the institute was selected, Volpe development could take a lot longer, because well-heeled academic institutions are not driven by the same time pressures as commercial development firms, Maguire and others said.

The Planning Board looks at the design of the first of the institute’s new Kendall Square buildings at about 8 p.m Tuesday. It approved the institute’s five-building array for south of Main Street with a Planned Unit Development special permit this summer, but individual buildings get their own design review. (Although not advertising the hearing as public, the board is required to take oral public comment on the design.) It will also review the landscape on the far side of the buildings, away from Main Street.

The building is proposed as a 420,000-square-foot, 319-foot building with 28 occupied floors; its façade is multi-story bronzed anodized aluminum panels at slight angles, interrupted by three-story groups of windows. It will incorporate the existing two buildings at 292 Main St. (what the institute calls E38, until last month the site of the MIT Press bookstore), and 290 Main St. (E39, housing Rebecca’s Café and Cosi) while maintaining their historic facades. They will make up 68,000 square feet of academic office space with 21,000 square feet of ground-floor retail. A three-story “podium” building will be added behind, in what is now a parking lot, to rise 26 more stories in a tower above the podium, cantilevering over E39. The tower will be graduate student housing, with approximately 450 beds.

Referred to as “SoMa Building 4” for “South of Main” (and unrelated to the institute’s existing Building 4 in the center of its campus) and not yet assigned an MIT building number, the dormitory is designed by Nader Tehrani of the firm Nadaaa along with Perkins+Will. Tehrani was head of the institute’s architecture department from 2010 to 2014.

The institute has not yet decided on the ground-floor retail tenants, but the podium building will contain a new institutional use called the “MIT Forum,” a public event space. Its admissions office will also relocate to the renovated E38, placing it next to the Kendall T headhouse and addressing an often-heard criticism: that it is hard to find the school from the Red Line.

The institute’s submission discussed its existing retail tenants: Rebecca’s Café closed when its lease ended in July; the MIT Press’ bookstore has relocated temporarily to 301 Massachusetts Ave.; Kendall Market & Deli’s owners have retired; and Cosi is “considering its options amid its recent bankruptcy filing.”

City planning staff released their design review memo (PDF) Wednesday, saying they are “comfortable” with the building design. Staff called the bronze color gradations of the tower “a much appreciated playful and creative addition to the project,” and said they were “very supportive.” 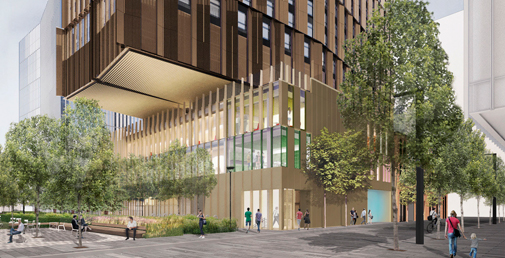 The southeast corner of the new dormitory could be subject to 25 mph winds. (Image: Nadaaa and Perkins+Will)

Staff did express concern over the wind impacts at the southeast corner of the building, where wind speeds worsened from 22 mph (in an April design) to 25 mph (in the submitted design). The institute said it would try to mitigate the uncomfortable wind condition with “strategic planting,” but city planners sounded skeptical, preferring changes to the building.

The staff memo asked for more details of the underside of the cantilevered tower and for “perspective views of the entire building from afar.”

The Planning Board will also review a large tree-covered landscape to be added behind the institute’s proposed buildings, on what are currently open parking lots and the remains of recently demolished buildings along Carleton Street.

Although the institute describes its outdoor landscape as “continuing the Infinite Corridor” to the east, it is somewhat of a fib. Its Infinite Corridor stretches 821 feet from Massachusetts Avenue toward the center of campus; it does not come close to the new open space, but instead ends 1,400 feet to the west. A series of related connected corridors and basement passageways do nearly reach the proposed new space.

“The landscape vision for the space is total transformation from surface parking lots to a highly active open space, mixing students, neighbors, workers and tourists, with an evolving calendar of programmed activities and events,” MIT’s submission says.

The staff memo expresses some concerns with the landscape compared with the version the Planning Board saw this year at special permit hearings, that it: is more “rectilinear,” losing some of the earlier curvy spaces; could use more lawn areas and less hardscape; presents potential for bicycle/pedestrian conflicts; and that plaza space around the MBTA headhouse has not been detailed.

At a January board hearing, member Tom Sieniewicz, an architect, asked where students would deploy hacks in the newly extended campus:

“I somehow imagine that in this civic space there will be some program elements that are so uniquely MIT – I think of it cartoonishly like the equivalent of the piano drop,” Sieniewicz said. “Of course every year at MIT there is this tradition where they throw a piano off the top of a building. I was wondering where the piano drop was going to happen in this plan? But that’s the kind of detail, kind of ritual or unique, authentic thing – I don’t literally mean the piano drop, but something like that that should be measured and understood to be here.”

In their memo, planning staff noted Sieniewicz’ comments had been translated into a need to clarify how the space would help “experience the groundbreaking activities of MIT (‘MIT‐ness’),” but the school hadn’t achieved it: “It is unclear how these ideas have been adequately translated into the proposed landscape design,” staff said. “Some activating features are discussed in the narrative, such as the possibility of projecting movies onto the bicycle parking access headhouse; however, such ideas are not fully explained or represented in illustrations.”