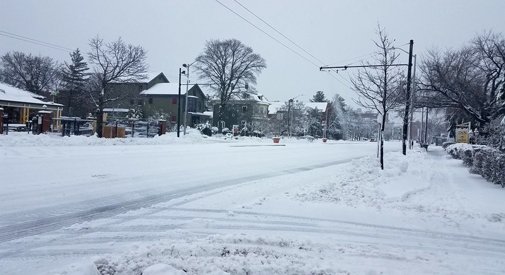 There was a run on grocery staples such as bread and milk at the Trader Joe’s at Alewife in anticipation of Tuesday’s storm. (Photos: Charles Teague)

A Tuesday storm dumped an estimated 6.2 inches of snow on the city and temporarily cut off power to more than a thousand residents – among nearly 70,000 statewide – as high winds took down tree branches and power lines, public works and utility officials reported.

While other parts of the state saw snowfall of 15 inches or more, here snow turned quickly to rain and sleet, said an expert at the National Weather Service office in Taunton. Still, some parts of Cambridge saw wind gusts of 52 mph.

The snow was expected to end Tuesday, and Cambridge officials were ending a citywide snow emergency parking ban at 7 a.m. Wednesday. City offices would be open, and some meetings – such as of the Cambridge Redevelopment Authority – would go on, while other bodies canceled Wednesday events. The License Commission cited the weather as cause for canceling its meeting.

As of late Tuesday, city schools were reported to be open as usual Wednesday.

But freezing temperatures overnight made roads and sidewalks potentially dangerous for travel Wednesday, the National Weather Service said, and some school districts, including Somerville and Medford, decided Tuesday afternoon to be closed Wednesday.

As of 7:20 p.m. Tuesday, the Cambridge School Department’s Twitter account was giving a more ambiguous message than the municipal Snow Center website – that officials still hadn’t decided whether to open schools the next day, tweeting only to refer parents to a tweet seven hours earlier saying a decision hadn’t been made. “We understand that it may be challenging to plan ahead in situations such as this, and we regret any inconvenience,” officials said in a note online. “If schools are closed tomorrow, the closure will be announced as soon as possible. Unfortunately, we may not be able to make that judgment until late Tuesday evening.”

A decision has not yet been made on whether or not school will be in session on Wednesday, March 15 Read on >> https://t.co/XwUh9AQwau

“We encourage staff and families to have a back-up plan for Wednesday that will provide you with flexibility. We will be communicating frequently with relevant safety officials in order to give you as much notice as possible,” school officials said.

Showing increased sensitivity to criticism of a years-long tendency to announce school closings later than surrounding districts, Cambridge officials went into some detail to explain why:

“The storm’s precise path, intensity and duration are difficult to accurately predict, and we won’t be able to fully evaluate the impact of the storm until it has progressed further … Conditions may change up until the last minute – including both the storm path and potential damage or power outages.”

Many city businesses were undaunted by the snow, with the UpperWest charcuterie in North Cambridge announcing by email it would open early for people going “stir crazy” and eateries such as Central Square’s Life Alive taking to social media to let customers know it was open. The nearby Phoenix Landing even offered free bowls of Irish stew to people who made it in.

The storm may not have lived up to residents’ fears of being stranded in their homes, suggested by the stripping of grocery store shelves of staples such as milk and bread, but it did leave streets largely empty during the fiercest snowfall, in the afternoon.