‘Ghost in the Shell’: Action flick looks great, but this adaptation is an empty experience 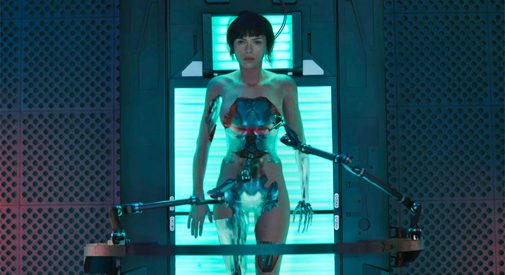 ‘Ghost in the Shell’: Action flick looks great, but this adaptation is an empty experience

Put a pretty girl in some Lycra and, poof, you got a movie, right? Well, yes and no. It worked with Kate Beckinsale and Milla Jovovich in the “Underworld” and “Resident Evil” series respectively, but not so much for Charlize Theron in “Aeon Flux” or Halle Berry in “Catwoman.” You can add Scarlett Johansson to that “not” list with this live-action adaptation of Masamune Shirow’s manga “Ghost in the Shell,” done more righteously in the 1995 animation feature directed by Mamoru Oshii. Sure, Scar-Jo looks fetching, much as she does as the Black Widow in the “Avengers” series, and the film, helmed by Rupert Sanders (“Snow White and the Huntsman”) with lush cinematography by Jess Hall, might even be more optically alluring. The “Blade Runner”-esque reimagining of a near-future Shanghai is a wonderment in its own right and perhaps worth the price of entry, but not enough to atone for an inert script and robotic acting. 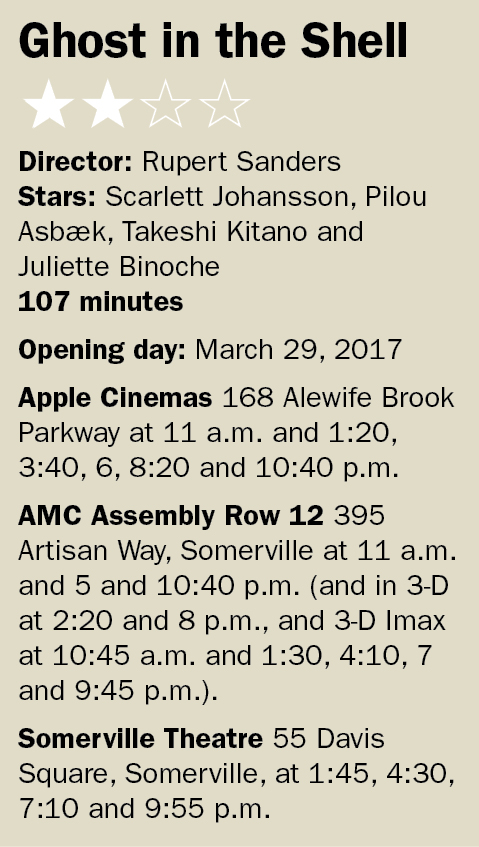 Things begin promisingly enough when Scar-Jo’s Major rises elegantly out of a synthetic pool, the first cybernetic organism manufactured by the Hanka Robotics corporation. Major’s a leap forward in human and technology fusion (the flesh and steel body being the “shell,” with her computer-infused brain the “ghost”), yanked from her scientific incubators (a matronly Juliette Binoche among them) and appropriated as a weapon to fight cyberterrorists. The target du jour is an elusive entity known as Kuze (Michael Pitt), who’s out to hack Hanka and the government to pieces. Major’s barely out of the lab when we get a glimmer of her prowess, leaping from a tall building and taking out a room full of assassins with barely a hair out of place. It’s a fiery, kinetic jolt that perhaps comes too early for its own good. The shell in which the film operates becomes quickly inconsistent in tenor and tone, bouncing from somber, semi-serious oppressive future vision (back to “Blade Runner”) to hyperbolic free-for-all and, in the process, uproots the prospect of suspension of disbelief.

Sadly too, Scar-Jo, so fantastic in “Under the Skin” (2013) and normally quite capable, comes off Ben Affleck-wooden here and is further undermined by the film’s lack of an emotional core. The device of Major struggling to tap into her “ghost” to discover her true identity, much akin to Peter Weller’s cyborg in “RoboCop” (1987), piques interest at turns, but ultimately feels tacked on and beholden to the larger sheen. The corporate and governmental double dealings, which strangely seem apt as metaphor for the Trump presidency and its shadowy ties to Russia, also could have been played for greater satire and bite but also become lazy and lackluster plot points. By the end of the film, everything’s empty and contrived. Then the “spider tank” shows up and hyperbole takes off her gown to reveal a not-so-appealing figure.