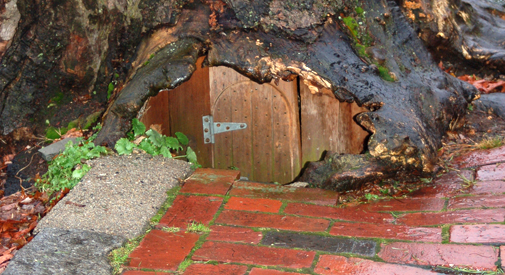 Residents: Lucky to have had something that makes goodbyes hard
By Tom Meek 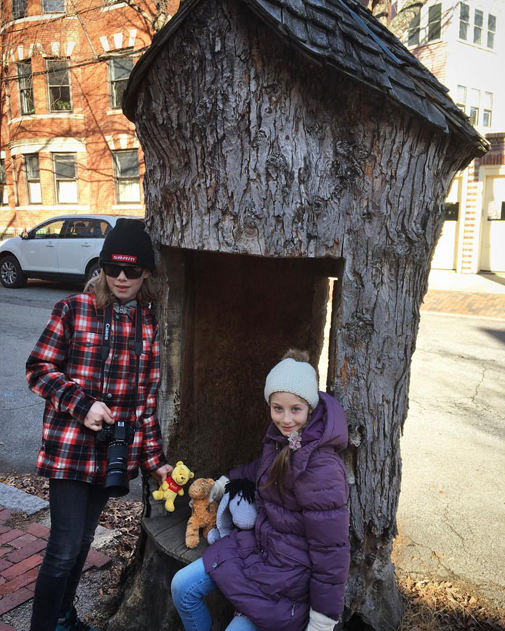 The Winnie-the-Pooh tree on Hurlbut Street drew visitors from all over – including kids on geocaching missions out of Canada. (Photo: Geo Kidz) 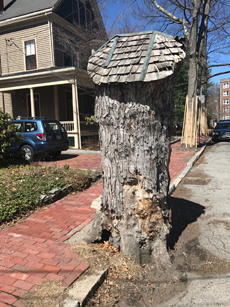 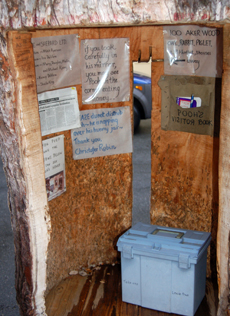 Inside are notes, a guestbook and a lending library box. (Photo: Ketzirah Lesser & Art Drauglis)

The “Pooh House,” a beloved jewel of Neighborhood 9, will be torn down in the coming weeks as part of a lead pipe replacement and repaving scheduled by the Department of Public Works, officials have told Hurlbut Street residents – the base of the stump is rotted and the removal of the stump will allow the city to make the sidewalk compliant with the Americans With Disabilities Act..

Twenty years ago, a grand silver maple that lorded over the street became a victim of a April Fool’s Day snowstorm that dumped nearly two feet of heavy, wet snow on the city. The remaining stump, initially hollowed out by Harvard anthropologist and neighbor Irv Devore, was crafted into the Pooh House by wood sculpture artist Mitch Ryerson, whose imaginative, interactive sculptures dot playgrounds across the city.

Funded in part by the Cambridge Arts Council, the belly of the tree became a living room occupied by a plump Pooh Bear with a guest book hanging inside to be signed by visitors – mostly children inspired by the chance to see a physical incarnation of A.A. Milne’s cherished creation. The eight- to nine-foot structure was capped by a meticulously laid shingled roof and a weathervane with a faded sign below for “Mr. Sanders” near a small door and window leading to the root system, a reference to Milne’s previous Pooh house tenant.

Soon the whimsical structure will be uprooted and removed.

“Sad to see it go, but 20 years is a pretty good run for an old stump,” Ryerson said.

Hurlbut Street resident Bill King recalled Devore’s caring curation of the Pooh House, which also became a take-and-return honor library of sorts, and reported that the guest book was once used to facilitate a marriage proposal (and, the next day, an acceptance).

Longtime Avon Hill resident Ruth Ryals talked about the draw of the house when her now-mature grandchildren from Pittsburgh came to visit. “It was a special place for them that helped make Cambridge special,” Ryals said. Many other area residents shared equally fond remembrances. 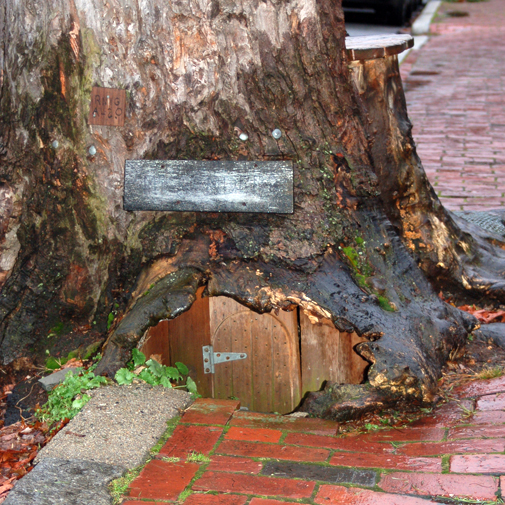 At the roots is a doorway with a faded sign for “Mr. Sanders.” (Photo: Ketzirah Lesser & Art Drauglis)

A less substantial Pooh House has been a fixture outside Harvard’s Science Center at 1 Oxford St. since 1990.

Tom Meek is a writer living in Cambridge. His reviews, essays, short stories and articles have appeared in the WBUR ARTery, The Boston Phoenix, The Boston Globe, The Rumpus, The Charleston City Paper and SLAB literary journal. Tom is also a member of the Boston Society of Film Critics and rides his bike everywhere. This post was updated April 13, 2017, to add clarity about why the tree was being removed.