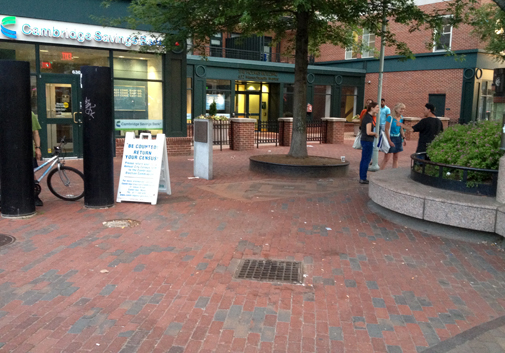 A police reporting station is planned to go on or near Carl Barron Plaza in Central Square this summer. (Photo: Marc Levy)

Plans for increased police presence in Central Square will come into sharper focus at a May 30 meeting, but officials are being careful about what it would mean for an area where encounters with drug users, homeless people and others seeking services have caused nervousness among churchgoers, families and other residents.

“I don’t want anyone to think that this is a cure for all the things that folks are struggling with in the square,” vice mayor Marc McGovern said. “I do hear a lot … particularly from the seniors, that they feel really unsafe there.”

Councillors went from talking about a police “outpost” to a “substation” when McGovern and Mayor E. Denise Simmons introduced the idea March 27. Police themselves are referring to what’s coming to the square as a “reporting station,” where officers can file reports while out on patrol without having to come back to the main police station near Kendall Square.

As discussed with the Central Square Business Association and City Council, the reporting station would be on or near Carl Barron Plaza, said Jeremy Warnick, director of communications and media relations for Cambridge police. It would not be “a substation, which would likely need to be staffed full-time.”

Rather, Warnick said, it will be like the Cambridge Police Department’s four existing reporting stations in the CambridgeSide Galleria mall, the Pro EMS ambulance company on Smith Place near Fresh Pond, the Harvard Square garage and at 5 Western Ave. near Central Square – the city’s police headquarters until 2009.

“I want that visual”

As a summertime test to see how an expanded, physical police presence in Central Square works, the reporting station would have to be prominent. “I want that visual,” Simmons said, with councillors eyeing use of an empty 3,580-square-foot retail space right on Barron Plaza. Since opening nearly three decades ago, the retail space’s longest-term renter was an AT&T store – and that was for only about five years.

Councillors saw the possibilities for improving Barron Plaza as well, as the vacuum created by the empty space has made for a blighted feel on the prime real estate. Talk also drifted to the humanitarian aspects of making the square feel cleaner and safer, maybe even flooding it with social service workers daily. “For this to be successful, it can’t just be [a police] outpost. It has to be a comprehensive solution where police inside or in the square are a minority, just part of an initiative,” Nadeem Mazen said. “I almost want it not to be a police outpost, but a social service outpost.”

But Simmons was adamant about an obvious police presence being the important thing.

“If you are visiting Central Square, you might not go to a social service outpost to get general information, but you’ll go to a police outpost,” she said.

Plans are being pieced together gingerly after debate in March and a follow-up April 3, when councillor Craig Kelley submitted a letter saying he’d concluded it was a bad idea.

To Kelley, the original call for an “outpost” sounded like militarization and the proposal continued to smack of sending in police to handle matters that should have little to do with them.

“We keep looking to them for all these things that really aren’t police work. If this is what we want, it’s not because we have a mental health issue, it’s because we have a crime or violence issue that police are uniquely situated to solve. I’m not sure that’s the case,” Kelley said.

He foresaw a time when budget cuts trickling down from the federal level would limit the abilities of social services agencies while pumping up defense, homeland security and police forces, making it “tempting to use police to do things which they are almost uniquely not equipped to do. And the result will be problematic,” Kelley said. “You say ‘do what police do,’ but police wear uniforms, they carry guns, they carry handcuffs, they arrest people.”

Relying on police to improve Central Square for issues such as disorderly people and overly aggressive panhandling could lead to bad outcomes, he said, if someone gets a police interaction on camera that could be out of context and misinterpreted.

Other councillors pushed back on Kelley’s concerns, both praising Cambridge police for their skill in interacting with the public (“We have police officers who will go above and beyond in terms of training to not just exert authority at the end of a badge and a gun, but to work with the community proactively,” Leland Cheung said, noting their work with the homeless) and saying the police would not be called upon to act as social workers – or to crack down significantly.

Though McGovern said there was crime such as drug dealing in Central Square that did demand police attention, for him and Simmons the summertime police test is a way to correct the removal of the police station from Central Square and the change in presence that came with it. A resurgence in family visits and tourism could be the result, councillors said.

“If we were asking for more aggressive policing in Central Square, we would have asked for it. People have been concerned about that move and feel less safe, and that is what this order is trying to address,” McGovern told Kelley, “nothing more, nothing less.”

Still, while plans for the police reporting station proceeded, McGovern and Mazen planned to hold a committee hearing to look at how to enhance social services in the square – with a possible eye on ensuring that what resulted didn’t draw even more homeless, worsening the situation.

Kelley’s dissatisfaction with the answers honed what he would address in his own committee meeting.

“It sounds like we want more aggressive policing around these issues, and it’s not entirely clear. Is it the public drinking we want them to police? Is it the public marijuana? Is it the panhandling? I think we owe it to them as well as to everybody else to have a conversation as soon as possible to try to clarify what people think,” Kelley said, “and what that looks like on the street.”

His Public Safety Committee hearing is scheduled for 4:30 to 6:30 p.m. May 30 at City Hall, 795 Massachusetts Ave., Central Square, to discuss “the role of police officers in the community,” installation of the Central Square police reporting station and the stationing of a uniformed police officer in City Hall.