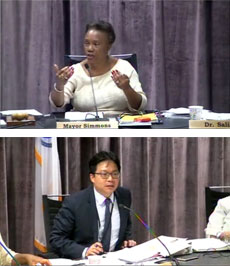 A three-year plan for Cambridge Public Schools, which took the superintendent roughly the past year to put together, was blocked from a School Committee vote of acceptance Tuesday by Mayor E. Denise Simmons.

There wasn’t enough to vote on, she said.

“I’m looking for more of a plan. I don’t have enough to adopt for right now,” she said, asking for a roundtable meeting in July at which the committee could get deeper into the details. “I want to vote when it’s finished.”

Tuesday was the last meeting of the academic year, so Simmons’ singlehanded tabling of the motion pushes off the vote significantly. There’s a summer meeting July 25; regular meetings start up again Sept. 5.

“I’m very disappointed,” said vice chairman Fred Fantini, visibly moved. He, with Manikka Bowman and Patty Nolan, were committee representatives in the document planning process. “I think it sends a garbled message to everybody in the system who has worked on this plan. I can’t tell you the pain I feel in not supporting this vote and continuing this.”

Simmons’ final comments said her move was “my way of saving this from a no vote.”

“I don’t think it has the four votes” needed for approval, she said.

Fantini, Bowman, Nolan and Kathleen Kelly confirmed they would have voted in favor, though, making a majority.

Superintendent Kenneth Salim presented the three-year plan at the committee’s June 6 meeting and at a town hall held June 13 as an “audacious vision” that will “transform” teaching and learning. It encountered many questions on specifics, including a pervading sense from many that they could not see how the vision would translate to changes in the classroom.

“It may seem like the end” of the process, Nolan said two weeks ago, “but, in fact, it’s the beginning of the actual [detail] work.”

Acknowledging the document may not feel to everyone like a plan, Salim said this week he and his team had decided to call it a “District Plan Framework” instead to better reflect that it laid out guiding principles and a “theory of action”; elements such as “timelines, people responsible for actions and specific outcome measures” would be completed in the next phase. In addition, on Tuesday committee members saw a tweaked version of the four-page draft originally presented and expanded wording of five strategic objectives to address some of the aspects many people felt were missing.

The first objective, for example, now specifies equity and access is “to increase opportunity and achievement.” Elsewhere is a call for a review and analysis of special education referrals and discipline data and new, specific outcome measures such as an Algebra I pass rate and desired percentage of teachers of color. At Simmons’ recommendation, the experiences of a specific cohort of students will be tracked. “Cultural proficiency” is identified as a goal.

With these additions and conversations with Salim and others involved in developing the document, Kelly said she “had moved to yes.”

“He listens,” she said appreciatively.

But for Simmons, there was still not enough meat on the bones. “This ain’t our first time at the rodeo,” she said. “How is this going to be different than any other thing we’ve done before?” She said she was looking forward to learning more about the next phase’s specifics and details on implementation – “more of a plan.”

“I wasn’t in these discussions,” Simmons said, betraying a lack of familiarity with elements of the plan, including that it covered three years and how insights of several different populations were knit together.

Harding and Emily Dexter, neither of whom were transparent on which way they would have voted, shared concerns.

Though at the June 6 meeting Harding announced “I think we’ve arrived” and told Salim, “I’m glad you’ve been bold,” at the Tuesday meeting he said he remained “very, very concerned about the lack of intentionality around student achievement and closing the achievement gap” and dwelled on previous, unsuccessful attempts at attacking the problems.

Kelly, too, noted in comments that she had felt “left out” of detailed discussions, and stressed that she wanted more regular updates. Although progress on the plan was referred to regularly this year, the fact that the plan boiled down to four pages with no specifics on implementation was not presented to the public or, apparently, to the four committee members not in on the planning until the agenda for the June 6 meeting.

Dexter urged that the plan be “really audacious,” possibly bringing in Cambridge figures such as former civil rights leader Robert Moses, whose Algebra Project called for low-income and nonwhite students to excel at algebra in middle school, and current Cambridge public school teachers, including one who “hung out with James Baldwin in Paris for a few years” – a reference to Cambridge Rindge and Latin high school photography teacher Archy LaSalle.

She also seemed to crave more details about what was learned in the long process of collecting insights from discussions at school and student councils, town halls and educator and administration meetings, as well as 57 individual family interviews from underrepresented populations. Salim’s entire “cabinet” played a role in the planning, along with a planning team of 31 members from across the community, including the three School Committee members. Dexter urged that all observations be collected and “put in an archive.”

Salim called the framework a “living document,” and assured the committee he saw its role as “critically important” at all steps, including a vote on the detailed initiatives and outcomes yet to come. He proposed four roundtables, starting with one in September.

“I hear the worry about the action planning piece,” he said. “I have heard a lot about the history of Cambridge and the worry that we’ve been at this point before and haven’t yet been able to realize to goals that we set. I believe that this is the right work we need to do. I believe that this process, by being inclusive, reflects the values and vision of our community. I also believed that we are poised with tremendous momentum.”

“School Committee endorsement is really important for us to move forward,” Salim said.

The team, he said, will work over the summer and is “excited” to begin work on the next stage Monday.

Staff member teacher Angie Uyham was among several members of the planning team who offered their support for the document in public comment.

“Do I think it’s perfect? No,” said Uyham, a Cambridgeport literacy coach and the new district design and innovation coach. Still, “I have been in this district for 10 years and in education for 20, and this is the first time I can say there’s been a roadmap for a district. This is our North Star.”

Dan Monahan, president of the the Cambridge Education Association and a former Cambridge teacher, called the team’s work “the most inclusive process that I have been a part of in Cambridge.”

It also had the enthusiastic support of at least one school principal: Katie Charner-Laird, of the Cambridgeport elementary school, who is also a parent of two Cambridge Public School students. “I have always felt a district plan is – ‘I’m doing whatever I’m doing for my school, and the district plan is over here,’” she said. “I’m now thrilled to go into next year and say, ‘This is our plan and this is the work that’s in front of us.’ This is the heart of the work. I can get a whole staff behind this.”

Chief Operating Officer Lori Likis, who facilitated the planning process, made a last-ditch effort to change the mayor’s mind, stressing how “everyone talked about how the process has changed already, how we worked together. It’s hard to overemphasize the value of that.”

In the end, committee members who were not on the planning team felt underwhelmed, and one tabled the vote.

“I hate having these discussions in the middle of a business meeting,” said Simmons, nudging discussion toward roundtables.

Simmons’ tenure has seen a continuation of a policy of not televising committee roundtables; the vast majority of budget-related meetings this year were not televised.

This post was updated June 23, 2017, to clarify that untelevised roundtables have been an ongoing issue with the School Committee.