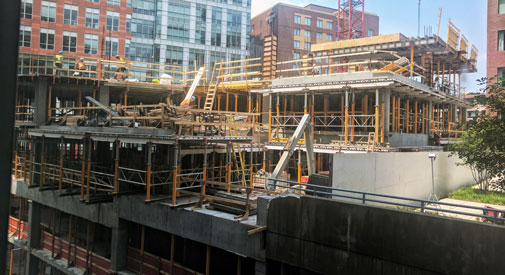 The city’s affordable housing policy over the past 20 years has been disastrous. Family and neighbors are being forced out of the city as developers and investors enrich themselves on our steaming hot real estate market. This is not sustainable, and drastic action is required to save our community from this onslaught.

According to the city’s 2016 housing profile, we have added a huge amount of luxury housing since 1997, but little to no housing affordable to people at low- and middle-income levels by comparison, resulting in severe upward pressure on rents. In fact, we’ve lost subsidized affordable housing as a percentage of total housing (15.4 percent in 1997, compared with 14.7 percent last year). This has led to tremendous displacement in our city, with a net loss of population at the middle income levels of 6 percent per year, compared with a net gain at the upper-income levels of 7.5 percent, according to the city’s 2016 Inclusionary Housing Study. 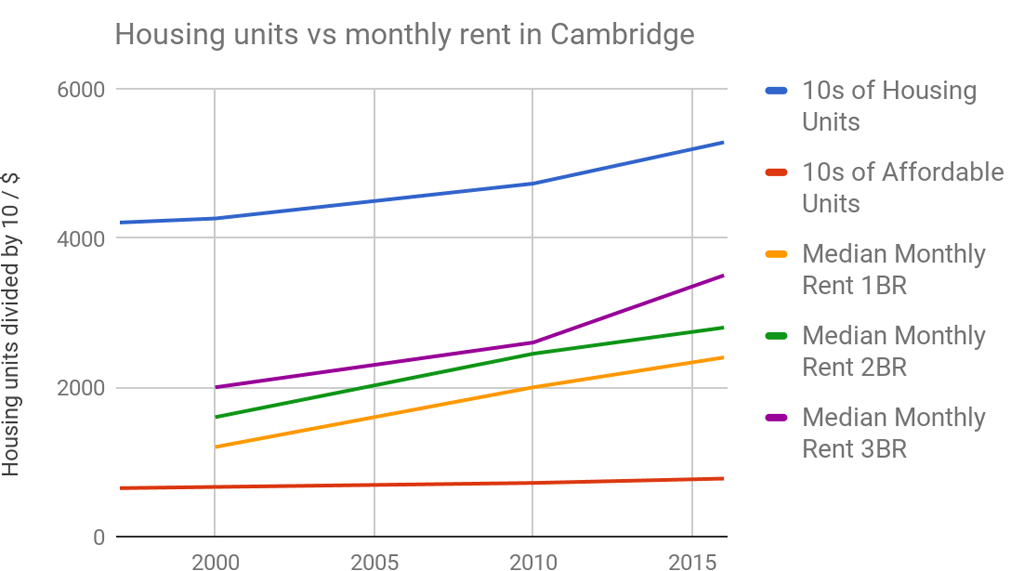 Here we see the total number of housing units in Cambridge from 1997 to last year compared with monthly rents and total subsidized affordable units (seen from 2000 to last year). Rents are from the latest housing profile, and are not adjusted for inflation; the housing units data are from Cambridge’s open data portal and the Community Development Department’s Demographics and Statistics FAQ).

The growth of market-rate (luxury) housing is clear – it represents 88 percent of the housing added since 1997. Meanwhile, the number of subsidized affordable units have increased only modestly. Adding so many luxury units has resulted in increased rents for all types of housing, which has been driving out middle-income populations: 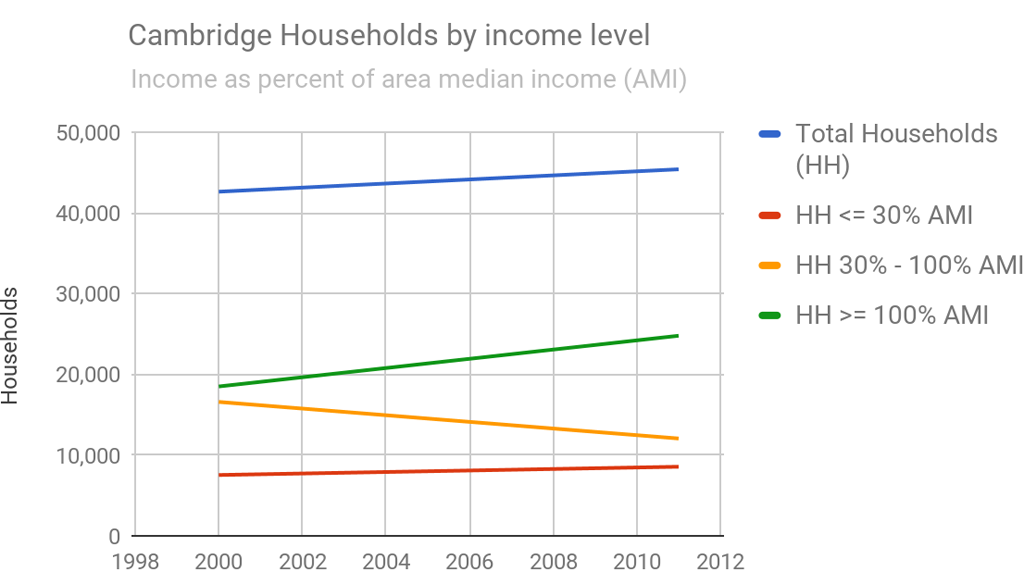 Now we see Cambridge households by income level from 2000 to 2011 (with data from Cambridge’s Inclusionary Housing Study Final Report in March 2016). The income groupings are based on whether households gained or lost in that time.

While there’s no simple, quick-fix solution, there are several areas that must be addressed by the next City Council, including: further increasing the inclusionary zoning and adding middle-income and three-bedroom requirements, increasing the linkage fee paid by commercial developments and using the massive Volpe development in Kendall Square as a turning point in how we deal with housing by demanding more residential construction and less commercial in that development. Also, the next council should consider a transfer tax to reduce speculation, and explore alternative models such as housing cooperatives. As a candidate for the council, I plan to explore all these avenues and more. It is critical that we respond vigorously to the affordable housing crisis in Cambridge and the Boston metro area.

Quinton Zondervan is a candidate for City Council in the Nov. 7 elections. All candidates are invited to share their thoughts on Cambridge Day with readers and voters. The homepage image used with this essay, of Kendall Square construction in July, was by Eric Kilby via Flickr.