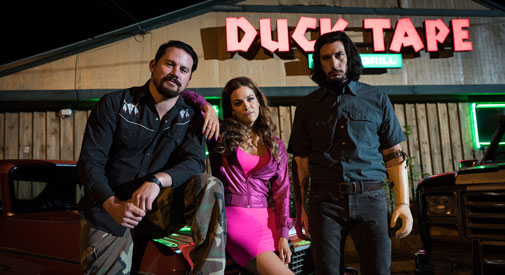 It’s only been four years, but feels much longer, since director Steven Soderbergh last treated filmgoing audiences to one of his quirky, deconstructive gems. Granted, “Side Effects” (2013) was something of a disappointment, but the director’s HBO biopic of flamboyant performer Liberace that same year generated plenty of heat, as did his previous feature, “Magic Mike” (2012). Soderbergh, an against-the-grain filmmaker, has always been one to toss the dice, be it his casting of a martial arts expert or a porn star in character-driven lead roles (“Haywire” and “The Girlfriend Experience”) or being one of the first to deliver a film simultaneously into theaters and on-demand (“Bubble” in 2005). For his latest, the American auteur taps into the skin of some of his more commercial fare – “Ocean’s Eleven” and “Out of Sight” – while farming fresh territory. 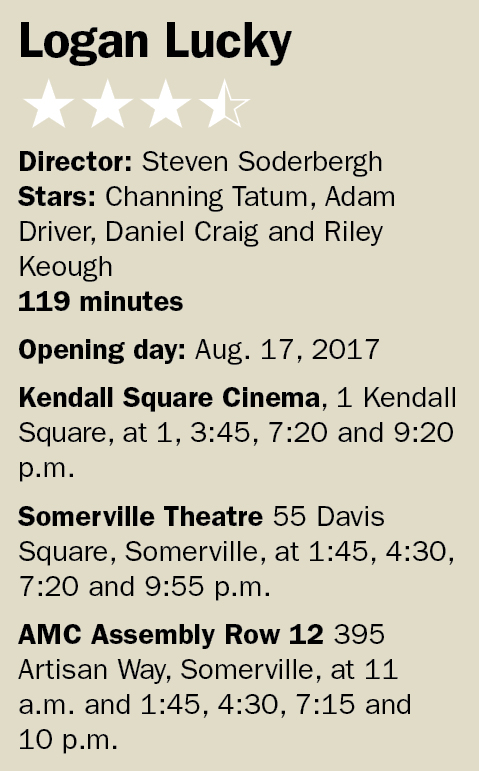 So it’s no surprise “Logan Lucky” is a heist caper – though not nearly as hip as the “Ocean” films. It’s set at a massive Nascar speedway in North Carolina, with the bulk of its protagonists down-on-their-luck West Virginians. Glitz and glamour are scarce, but arrive in the form of Riley Keough (so wickedly good in “American Honey” and adding to her stock here) as one of the Logan clan in on a plot to drain the speedway’s vault, and Katie Holmes as the ex-wife who’s traded up in social class and occupies a sprawling McMansion. At the center looms lovable Jimmy Logan (Channing Tatum, who’s been in several of Soderbergh’s more recent projects, including the Mike in “Magic Mike”) a golden-armed QB who never made good his promise to play at the collegiate or professional level because of a bum knee; as a result he toils as a second-string laborer, and a prideful one at that, refusing financial help from the ex who’s constantly offering to buy him a cellphone so they can better coordinate handoffs of their beauty pageant-obsessed daughter.

That hobbled knee leads to Jimmy’s dismissal as a Bobcat operator working as part of a massive crew to mend sinkholes plaguing the speedway. If Jimmy seems unlucky,  his brother Clyde (the ever droll Adam Driver) is a punchline of sorts for irreverent patrons at the local watering hole where he pours drinks, as he lost his arm serving in Iraq. Pissed off with the cards he’s dealt, Jimmy enlists Clyde and Mellie (Keough) to rip off the racetrack. The plot’s big conundrum becomes the matter of blowing the vault, for which the Logans recruit local  safecracker Joe Bang (Daniel Craig, devilish as the steely-eyed cracker) who’s cooling his heels in jail and needs to be sprung for the job, then returned before anyone knows he’s gone missing – the scheme is that far-fetched and fun. To ensure his share of the cut, Joe folds his brothers Fish (Jack Quaid) and Sam (Brian Gleeson) into the mix – essentially the trailer-trash realization of Beavis and Butt-head in the flesh, bad hair and all.

Like in the “Ocean” films, Soderbergh’s loaded A-list goes on and on and also includes Hilary Swank as the FBI agent brought in to sniff out the perpetrators, Dwight Yoakum as the prison warden unwilling to admit to flaws in his system and Seth MacFarlane as a smarmy energy drink exec.

Given the recent events in Charlottesville, the portrayal of Nascar culture and the South, “Lucky Logan” might draw a scrutinizing eye for insight or illumination. And while that’s fair enough, there’s really nothing political about Soderbergh’s romp (thought there is a black vs. skinhead/white-supremacist prison riot that’s staged as part of the bigger scheme), it’s simply a rocking good time driven by a rich potpourri of personality and some slick twists that feel as easy and natural as they are smart. With Soderbergh, his characters and cast, “Logan Lucky” could have been set anywhere; the where could have been a dart throw on a map and it would have worked with such effortless, quirky cool.