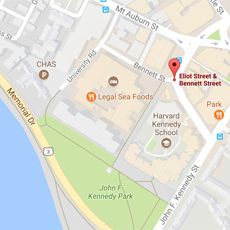 Attacks took place at around 10:30 and 10:43 p.m. Saturday at Harvard Square intersection and near JFK Park.

Two apparently unprovoked and pointless but violent Saturday night attacks in Harvard Square are under investigation by police.

In both cases, the attack was by a man traveling with a small group of people. “We believe it was the same person,” said Jeremy Warnick, director of communications and media relations for Cambridge police.

In the first incident, a Cambridge resident said he was crossing at Eliot and Bennett streets at around 10:30 p.m. when a man came up behind him, grabbed him and hit him in the back of the head. The victim was found to be cut – police say it might be a stab wound – and was taken to a local hospital for treatment. The wound was not life-threatening.

The suspect was with two other people when it occurred, according to the victim.

In the second incident, around 10 to 15 minutes later, an Arlington resident reported getting a slashing wound to one side of his lower back, though slight enough that he refused medical attention and was able to return to work afterward. The victim said he’d been walking toward JFK Park to smoke a cigarette while on a break and was focused on his cellphone when a man stabbed him in the back and punched him in the face. He was bandaged by co-workers and encouraged to tell police what had happened.

The suspect was with three other people, according to the victim. They appeared to head to the T stop afterward, Warnick said.

“You don’t see this kind of incident often” in Harvard Square, he said.

The suspect in both incidents was described as black, approximately 6 feet tall and of medium build. In the first incident, the suspect was described as wearing his hair in an afro. It is unclear what type of weapon was used in either incident. Police are looking into whether either attack was captured on video, Warnick said.

There have been no other recent incidents similar to these in the city, he said.