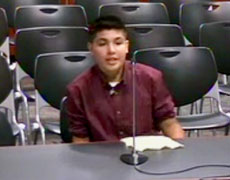 Ninth-grader Leo Austin Spooner speaks Tuesday to the School Committee in favor of replacing Columbus Day on the academic calendar.

Indigenous People’s Day will officially replace Columbus Day on the district’s school calendar after the School Committee voted Tuesday to make the change. It follows a City Council decision in June 2016 to change the second Monday in October to a holiday celebrating the natives, many argue, who were doomed to oppression and enslavement after Christopher Columbus’ arrival.

The motion not only renames the school holiday, but identifies Oct. 1 as a non-holiday officially recognized as Italian Heritage Day.

This puts the city and school calendars finally in sync.

Tuesday’s vote ends a multiyear process to make the change. Fifteen months ago, as the City Council agreed to the change after months of discussion, Mayor E. Denise Simmons promised, “I’m sure this will be adopted” by the School Committee, which she leads.

Instead, the motion, initially proposed by member Patty Nolan in March 2016 to follow the council’s lead, languished in committee administrative limbo. Initially, Nolan’s motion was calendared for future discussion by member Richard Harding, presumably to let the council be the first to take action.

Two meetings later, on April 5, Nolan proposed that the motion be moved to the Civic Unity Subcommittee, led by Kathleen Kelly, who seconded that idea.

Two months later, still in 2016, the council made the change official on the city calendar.

The Civic Unity Subcommittee has met once since then, on June 20, 2016. Minutes show that Kelly said she would “try to” to sound out the community on renaming Columbus Day, and “hoped to” bring the issue forward in a September 2016 full committee meeting to allow discussion – none of which happened.

The public hearings at the council found many people speaking in favor of recognizing indigenous people, but also several folks initially unhappy about what they saw as taking away a day many Italian Americans think of as celebrating their heritage. But among the lengthy comment by residents and officials at the council’s 2016 vote, no one spoke in favor of keeping Columbus Day as a holiday, and some Italian-Americans spoke with a sense of relief about letting it go.

Tuesday’s motion was written by Kelly, Nolan and Simmons. Kelly introduced it, saying, “It’s very important to take this motion up today.” Noting its two-year incubation period, she stressed the importance of “looking at history from the perspective of our localities,” and recounted some experiences of recognizing the contributions of native peoples here and in Canada.

“I’d like to support this,” said Fantini, but went on to offer what he called a “friendly” amendment: calling the second Monday in October both Indigenous People’s Day and Italian American Day.

That motion was not seconded, and Nolan pointed out that the vote is to match the City Council calendar. She also referred to “many Italian Americans at the City Council meeting who were supportive of this change.”

The motion passed, with Fantini voting “present” – to record that he chose not to vote.