‘Kingsman: The Golden Circle’: HQ is gone, blown up with first spy film’s sense of tone 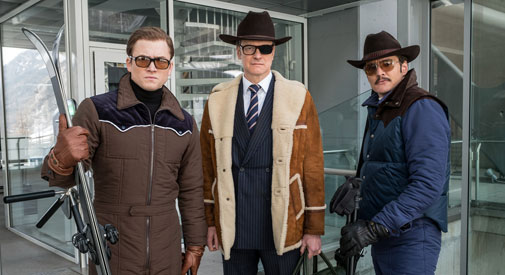 ‘Kingsman: The Golden Circle’: HQ is gone, blown up with first spy film’s sense of tone

The undeniable charm of Taron Egerton, Mark Strong, Colin Firth and Pedro Pascal, along with the sinister sweetness of Julianne Moore’s baddie, Poppy, can’t save the ugly and bloated sequel “Kingsman: The Golden Circle.” Suffering from the need to be bigger and louder than its predecessor but failing on both fronts, resulting in a film that’s both safe and grisly, director Matthew Vaughn fails at reining in his worst tendencies and lets the cast flounder in trying to pick up the pieces. 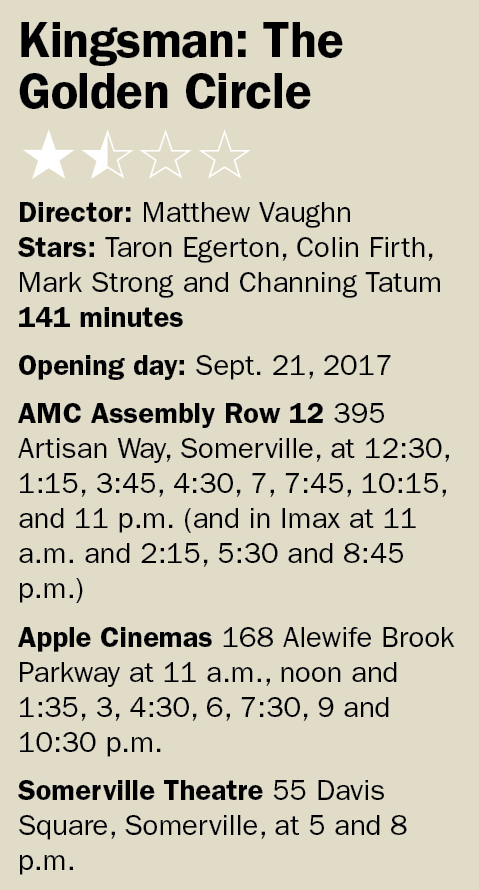 Everything is reset from “Kingsman: The Secret Service” when the spy agency’s headquarters are destroyed. With the world held hostage, the remaining Kingsmen, including Eggsy (Egerton) and Merlin (Strong) journey to find an allied U.S. spy organization called The Statesmen. They team up with Tequila (Channing Tatum), Whiskey (Pedro Pascal), Champ (Jeff Bridges) and Ginger (Halle Berry) to defeat the common enemy.

Perhaps if Vaughn and co-writer Jane Goldman had cut out all the egregious slow-motion or, instead of introducing The Statesmen to pander to U.S. audiences, stayed with its main cast, they might’ve been able to shave down an overstuffed film – running too close to two and a half hours – into one that was at least functional. Bridges, Tatum and Berry together get about 10 minutes of screen time. They don’t feel underutilized; they feel unimportant. Sticking with Moore’s unhinged Poppy as the main villain, giving focus to the remaining Kingsmen and the reintroduction of Harry Hart (Firth) as Eggsy and Merlin regroup would’ve been enough as a story, and one that could’ve been filled with just as many bangs, booms and absurdism.

The film’s other greatest error is a complete misunderstanding of that tone, despite perfecting it in the predecessor. There’s a ludicrously insane Elton John cameo, robotic killer dogs, more John Denver in a cinematic year full of it, meat grinders used for squirm-inducing purposes and a third-tier plot about a corrupt president, but the film is unavoidably tame. It contrasts its abundance of silliness with an easy-to-mock sense of taking itself way too seriously. When Vaughn and Goldman choose to double down on shock, we get scenes that further exploit women for the sake of an unfunny gag that continues a punchline from the first film, when Eggsy’s reward for saving the world was to engage in a certain sexual act with a princess.

That same Princess Tilde, played sleepily by Hanna Alström, is back for one of the sequel’s driest portions: We watch her and Eggsy’s relationship evolve as he once again tries to save the world, proving just that Alström and Egerton possess little natural chemistry.

There are a few merits to the film. Strong proves to be the comic MVP, and is given a surprisingly sincere moment in a film that hates sincerity. There’s Pascal and Moore, who make their new characters just interesting enough to warrant tolerating through exposition-heavy scenes. There’s Firth, astonishingly back from the dead, who breathes new life into a character we think we’ve met before; his chemistry with Egerton still shines, too. Egerton does his mightiest to anchor a film doing its utmost to throw him aside, and is so relentlessly charismatic it’s easy to momentarily ignore the trash he’s peddling. There’s even a third-act fight scene (reminiscent of the first film) in which he and Firth work in tandem in delightful choreography that plays to each of their singular and collaborative strengths. If only the rest of the film had mustered the energy to capture that sense of unabashed fun.

No amount of slow-motion pans of bullets firing out of guns, gross-out humor, Tatum dancing in cowboy boots or Moore doing her best to energize an isolated villain can hide the fact that “Golden Circle” is a slog. Forfeiting all that made the first a surprising sleeper hit for dialing the noise to 10 and substance to zero, there will be an audience for “Golden Circle” – but even they will be dismayed to see how far the creativity of the series has fallen in such a short time.